Down the RRMC / RMC Memory Lanes 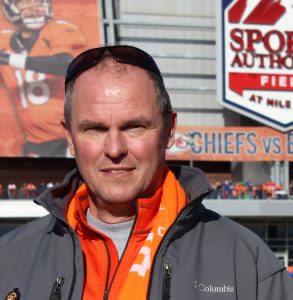 Steve grew up on a farm. He attended and graduated from Waterdown District High School in 1980. Waterdown lies about 15 kilometres south of Carlisle. So, he had quite a trek every day getting to and back from school.

We asked him what was his main motivation applying to military college.

“I had dreamed of going to milcol for years.  I wanted to have the opportunity to serve as an officer, and to get an education. The nearest recruiting office was in Hamilton.  Capt. Reiser was the recruiting officer.  I made so many trips to the office.  He and I were pretty much on a first name basis.”

Shortly after his high school graduation he was off to the Basic Officer Training Course (BOTC) in Chilliwack, B.C. which for the most part went pretty smoothly.

“One of my strongest memories is arriving at RRMC for recruit term, immediately after BOTC. The senior cadets were waiting for us at the top of the circle, and I remember looking at the senior cadets and for a moment thought – what have I gotten myself into.  And then 13713 Kelly Bokovay, the CWTO, started talking, and my first thought was repeated.”

Following his graduation from RRMC, Kelly, served as both an Infantry officer and a military chaplain.

When asked about what he recalled about the drill staff at ‘Roads’, Steve with a gleam in his eye replied, Sgt Major Baumgarten.  “Whenever we were on the parade square and things were not going to his liking, his most common response was ‘Jesus Christ!  What is that crap!  You’re training for war!  Do it again!’”

He shared a story of one more drill instructor; “Sgt. Bentley, always cracked me up during drill class.  He was a warrior poet as far as I was concerned.  I have often wondered where he is now.”

Steve did his five years of mandatory service as both a MARS officer, until he was able to reclassify to MARE (MS).  His postings included Victoria, Halifax and England.

Getting back to his military college days we asked about more memories?

“In fact, generally all of the staff at both RRMC and RMC are significant parts of my memories.”

Our Squadron Commanders:  Lt(N) Fodor, and Lt(N) Henderson, both of whom I met again later on in my career in different capacities and that shed a whole new light on them.”

Steve did III and IV years at RMC.

He graduated in 1984 with a Bachelor’s of Civil Engineering Degree and spent his two years on the peninsula hanging his hat in the Stone Frigate – an ideal dormitory for a future naval officer.
We couldn’t move on until he shared a couple of RMC stories.

“One of my best memories of RMC was when the Civ Eng Class of ’84 decided to enter the Great Northern Concrete Toboggan Race (GNCTR).”

The competition originated in 1974 and the race is for university and college engineering students to design and race concrete toboggans. RMC has competed often over the past 44 years including this year where it was hosted by the University of Waterloo from January 24-28th.

“We were the first entry into the event from RMC.  It was held in Edmonton during the winter of ’84.  The team consisted of Jeff Drummond, Jim Sawatzky, Bob Reisz, Larry Yarema, George Pankiw and myself.

Our design was, literally, 4-inch-thick slab of reinforced concrete with rebar used to form a cockpit to hold the crew of 5.  It literally weighed a ton.

We used a Herc to fly it from Trenton to Edmonton.

In our design, the pilot was in the rear, standing up, controlling brakes and direction with his feet on a pedal made of serrated steel.  On our first run, and the first bump, he flew off.  The rest of us had no clue until the toboggan started to sway uncontrollably until it rolled and broke up.”

He went on to explain, “I was the man in front and I landed about 30 to 40 feet from the rest of the unit.  We were thrown across the hill.  We could not stop laughing.  The rest of the competitors and the crowd on the hill thought it was the best crash they had ever seen.”

With a sigh of relief, he told us one more anecdote about the Concrete toboggan race.

“Our uniforms for the race were No. 4s, combat boots and motorcycle helmets. We have never told anyone that before. So sorry Gen. Norman.”

“All-nighters were a staple for a few of my classmates. I was never one to do that.  I always tried to be in bed early the night before an exam.  Except for one exam.  Bob Reisz, Karl McQuillan and I decided that for Dr. Barton’s Wastewater Treatment Course, that we would stay up all night.

Just to see what it was like.  We studied.  Got ready.  Then turned to kye and comic books to read for the rest of the night.  Well.  We failed to stay up.  I think we gave up at about 2 am and called it a night.  I don’t think we were particularly concerned because Dr. Barton had told us on the very first day of class that ‘We would all pass, in spite of ourselves.’”

In a more serious tone, he added:

“And, certainly, not to wax poetic, but my very best memory of my time in milcol are my classmates.  They were an important part of my life during very formative years.  I look back on them often and am always thankful for them being part of my life and my experience in milcol.  Being the class secretary allows me to keep in contact with them. And that just reaffirms to me how important these people are to me.”

When asked about what he considered his biggest challenge while attending either RRMC or RMC, he confidently responded:

“I never really found milcol that overly challenging as a concept, once I understood the purpose and the plan, as it were, for the 4 years.  It became a question of balancing all of the requirements:  Academics, Athletics, Bilingualism and Military Training.  Certainly, some of the coursework was challenging, but that was expected.  I think for quite a few of us it took some time to transition from high school academics to university level academics, but once we were able to make that transition, it became much simpler.”

As previously mentioned,  Steve left the fleet in 1989-90 and moved to California for a few years, where he started consulting.  His first project there was an assessment of the residue from solid rocket motor firing for ICBMs.

He returned to Canada in the mid ‘90s and have been consulting here since then.  “I have been with Amec Foster Wheeler for the past 11 years, where my focus is currently providing engineering consulting services to clients such as Canadian Nuclear Labs, and federal government departments.”

The 1984 graduate was a hard working and solid member of RMC Club Board for a couple of years in the early 2000s. He was tasked with recruitment and then transitioned into the finance portfolio.

Today he lives in Innisfil, Ontario. Just off Lake Simcoe.

“Many nights you will find Jen and I either going for a run or a bike ride and ending up in the lake for a swim afterwards. My work office is located in Barrie, so my commute is a pleasant 15 minutes along the waterfront.”