“What was taught in Dr. Klammer’s courses helped me to overcome massive challenges”

25295 Melissa Chandler (RMC 2012) was recently posted from 4 Wing Cold Lake, where she served as the Intelligence Officer at 409 Tactical Fighter Sqn, to USNORTHCOM/NORAD in Colorado Springs, CO. As the Kitchener-Waterloo, Ontario, native describes it, she originally came to RMC because she wanted “to be better prepared for what life would end up throwing my way,” and she got what she was looking for.

“In the summer of 2002, when I was twelve years old,” she recalled, “I was attending the London, Ontario, Air Show with family and friends where I came across a brochure for RMC. I am not sure why but I held onto that brochure for years. Ten years later, I graduated from RMC.”

Although she majored in politics, Chandler credits LCol (retired) Joy Klammer, the professor for her both her third and fourth year mandatory psychology courses, with preparing her for the challenges she has faced so far in her career. “I have found that the lessons I took away from those courses have been more applicable in my career thus far. Specifically, I recall an essay question on Dr. Klammer’s final exam in Fourth Year,” she said. “It presented an ‘unwinnable’ hypothetical scenario for an officer deployed to Africa. Although I have not been deployed to Africa, I was presented with what I consider to be an ‘unwinnable’ situation during my first deployment to the Middle East. I truly believe that what was taught in Dr. Klammer’s courses helped me to overcome massive challenges which I faced very early on in my career.”

And Chandler’s career has certainly been a busy one. “I completed the Common Army Phase (also known as BMOQ-Land) immediately following graduation in the summer of 2012,” she explained. “I then spent nine months completing on-the-job employment (OJE) as the administrative assistant to the CO and A/Adjt at 21 Electronic Warfare Regiment at CFB Kingston. In October of 2013, I completed the Basic Intelligence Officer Course at the Canadian Forces School of Military Intelligence. I was then posted to 4 Wing Cold Lake.” She has deployed twice in her career to date, first as the Fighter Detachment Intelligence Officer with OP IMPACT Roto 1 in the spring of 2015 and then as the Air Task Force Romania Operational Support Element Intelligence Officer with OP REASSURANCE in the summer of 2017. These deployments are the highlight of her career. “They were hard times, but great learning experiences.”

Like many Ex-Cadets, Chandler has stayed connected with her former classmates. “I run into people all of the time, whether it be on base, on TD, on courses, or on deployment,” she said. Her favourite memories of the College include exchanges with the U.S. Military Academy at West Point and yearly Department of Politics visits to Parliament Hill. 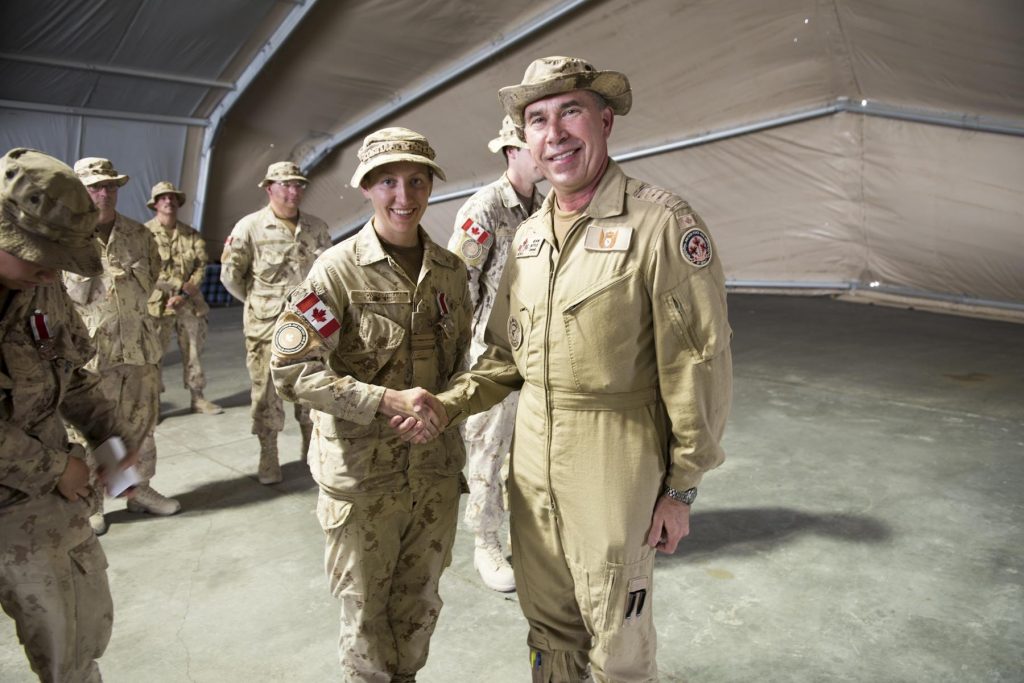 Capt Chandler receives her GSM-EXP from then Col (now BGen) Boyle in 2015.