25767 Cassandra Mainville (nee Harpe; RMC 2012) is currently posted to the Canadian Special Operations Training Centre (CSOTC) as the Quartermaster and lives in Petawawa with her husband Kyle and their dog Diesel. The northern Ontario native took coming to RMC as a challenge and that attitude has served her well since graduation. 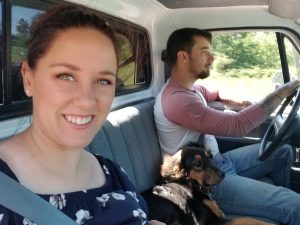 “Honestly, being from a small town (north of Sudbury) not many people knew a whole lot about military life or RMC so they saw it as an unobtainable goal when I expressed interest,” she said. “I took that as a challenge.” She was also attracted by the job security. “I also knew there was a certain degree of that because you owe five years of obligatory service once you graduate. Some people see that as a deterrent but you can’t find that level of job security where I’m from!”

Like many Ex-Cadets, it’s the people she remembers most from her time at the College. “My fondest memories are of just hanging out with people from my Squadron either in the lines getting ready for a parade or an inspection, or hanging out in town or at the mess or by the water. The campus is such a beautiful place that I feel most people take for granted until they’re gone. I sure did.”

Getting to know those people has definitely helped her in her career. “The best way I can say that RMC prepared me for the challenges I’ve faced in my career so far is definitely networking.  Having had the opportunity to meet people in almost every single trade that have since been posted all over the country, you know who to ask or where to look if you’re facing a problem set for the first time.  This has proven useful time and time again in my career, especially having moved around so much.” 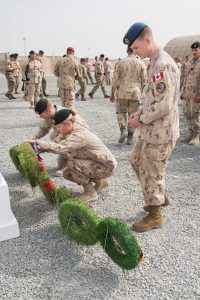 And Cassandra Mainville has moved around a great deal in the last few years. She’s seen postings to 25 Canadian Forces Supply Depot in 2012-2013, the Ammunition Technical Officer (AT) Course in Kingston and Borden (2013-2014), CJOC HQ as the J4 Ammo (2014-2016), 2 Svc Bn as the Quartermaster (2016-2018), JTF-I HQ with Op IMPACT Roto 5 as the J4 Sup (2017) and finally to the CSOTC as Quartermaster. “Out of all those postings,” she said, “two experiences stand out the most. First, being employed at CJOC HQ gave me the opportunity to work for what would end up being my biggest role models so far in my career.  My Major and Warrant Officer taught me everything I needed to know both as an ATO and as a young officer.  They both took the time to properly mentor me which, unfortunately, I worry too many junior officers don’t get the chance to experience today. Second, being deployed.  As logisticians we are often pulled in so many directions when it comes to specializing or generalizing in multiple fields of expertise that we sometimes question some of the tasks we have to accomplish.  My deployment experience allowed me to apply a great gamut of skills I had gained in practice with confidence to real life scenarios that greatly varied from one another. The biggest enabler over there was knowing that I could count on the entire team to get the job done since we were all working towards the same mission.”

Despite all the moving around, she’s stayed in contact with many of the people she knew from the College. “I’ve remained in touch with former classmates in the sense that even though our lives have certainly pulled us all in different directions,I still find myself constantly running into people I went to RMC with almost every day.  Do I hang out with them on a regular basis? Not necessarily, but you better believe if I’m going to a different base where I know someone is currently living that we’re going to meet up for coffee.”

Looking Back At the RMC / USAFA Exchange