Regular e-Veritas readers will recognize the name, Danielle Andela. Danielle was our Lead Cadet Correspondent for the best part of four years. She graduated in 2016 and is now the Squadron Logistics Officer | 2 Air Movements Squadron | 8 Wing Trenton. 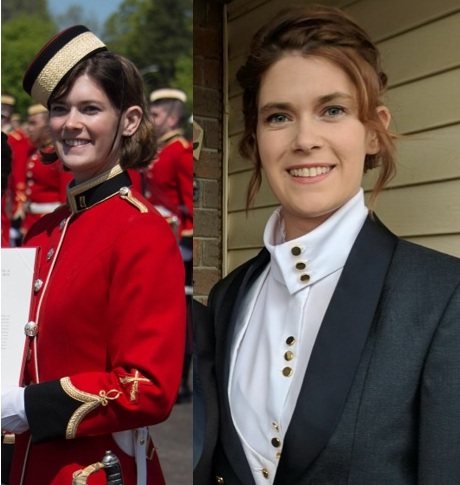 Two years. It’s incredible to think that it has already been two years since I last marched through the Arch and said goodbye to the people with whom I spent four long years undergoing the rigorous preparation for military life as an officer in the Canadian Armed Forces. Since then a lot has changed; I’ve been to Africa on a courier tasking, I’ve had the opportunity to participate in a working group for the improvement of the international Exercise MAPLE FLAG, I’ve had an opportunity to attend the 2017 Women in Aviation Conference in Calgary, and I’ve had the opportunity to compete in the 8 Wing Surf N’ Turf competition as a member of my Branch’s team.

I remember being a cadet, looking into the “great beyond” after RMC, and I had no idea what to expect. I had no idea how I would be immediately placed in a position of responsibility where I would be expected to oversee the management of millions of dollars of public funds. I had no idea I would meet so many motivated colleagues who I would be able to lean on and learn from while I fleshed out my place in life after graduation. I also had no idea that I would retain some of my university friendships for years after graduation and even make some new and rewarding ones with people I was never close to before.

Life after RMC has been an adventure, one of the most exciting parts has been having the opportunity to make my own mental/physical health and wellness choices. Not only are there many Health Promotion options to enhance your knowledge on the stresses that life can bring and the effect they can have on you as an individual, but they also emphasise how you can support those around you as a supervisor and help your team perform better. I honestly never thought I would see the day that I would be excited to take on the odious responsibilities of bill payments, home ownership and pet caretaking, however that day has come. It’s exciting to be able to manage your own life, work towards your own goals and be able to really see the difference you’re making in your environment and surrounding. It’s exciting to be able to plan your own healthy meal choices, diversify your ingredients with new options and ensure you’re sustaining your physical exercise the way you want to. Physical health is an exciting new domain to be discovered with a myriad of different base teams, clubs and competitions as well as Chain of Command support for external competitions and pursuits. When I sat down to write my last exam and stared the clock down in anticipation of the end of it, the last thing I would see myself doing is signing up for the 220km Highway of Heroes bike ride in support of Wounded Warriors (an incredible opportunity and organization to support if you’re interested).

Long story short, after graduation I discovered that I needed to manage myself, and I learned that I was excitedly looking forward to my next life choices. I’m now engaged to the love of my life, a dashing Aerospace Engineer named Jonathan, we have a house and two kittens we baby worse than actual babies, and I’ve got the best job in the world working as an Administration Officer for an amazing group of Air Movements folks in Trenton. I’ve seen in my two years after graduation that no matter what trade or element you are, no matter where you are posted, it’s you who makes things happen in your life and there is a whole world of possibilities for everyone to succeed and find happiness in this incredible organization.