28560 OCdt (II) Bennett Dickson arrived at RMC from RMC Saint Jean a few weeks ago.  The Political Science student plans on being an Artillery Officer. We look forward to the  Ottawa native being a big part of our e-Veritas team for the foreseeable future. 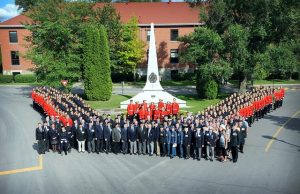 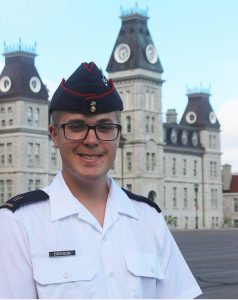 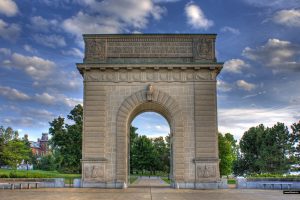 From Saint-Jean to Kingston

After enrolling in the Canadian Forces and finishing Mod 1 of my basic training, I had the privilege of attending the Royal Military College in
Saint-Jean-sur-Richelieu, Quebec for my first academic year. My time there was unexplainably exciting and enjoyable, and before I knew it, I found myself in Kingston at the Royal Military College of Canada to continue my education. While it was hard leaving RMCSJ behind me, I understood that there was a new opportunity in front of me.

For me, adjusting to culture and life at RMC Kingston has been a bit of a rollercoaster. One of the biggest shocks was the change in actual location and the factors that came with that. In Saint-Jean, it was rare to have conversations with locals in English, let alone see an English sign. Because of the geographical location and the history behind it, Saint-Jean has found itself as a very French-speaking town. While this helped me a lot with my bilingualism, it made it a little harder to get out into the town and experience the Quebecois culture for what it really is. Now living in Kingston, a place where English is very dominant, I have found myself adjusting to being back in a place where I speak the “native” language. When I go
out into town, I sometimes forget I’m back in Ontario and find myself beginning to order in French, only for the waiter to give me a weird look and a bit of a blank expression.

Another large shock that I have started to adjust to is the difference in size between RMC Kingston and RMCSJ. In Saint-Jean, the college is very small and consists of only a couple hundred students divided between four squadrons and living in two buildings right next to each other. The mess hall is only a minute’s walk away from both, as is the building where we would do our schooling. All in all, you could easily get from one end of the campus to the other with a short walk. Kingston, on the other hand, is incredibly larger. Because of the size of the spread between residences, and the number of students, it would be almost impossible to know everyone (compared to RMCSJ, where we were all fairly close). All in all, however, this is just another opportunity to meet new people and experience new things. This all being said, I think my biggest challenge this year will be adjusting to the school and finding the right balance between my academic, military, and social lives. In Saint-Jean, this was fairly easy due to the fact that, because things were so small, there was little room for interference. Now that I’m in Kingston, I’m being drawn to all sorts of new people and new experiences that could possibly interfere with this balance. Being able to take a step back and look for ways for me to improve my French, improve my military standard, maintain my marks and athletic capabilities are all a must if I want to successfully accomplish what has been set out for me at
RMC.
In conclusion, I really look forward to seeing what RMC Kingston has to offer. It’ll be tough to adjust to this school for the first part of my first year here, but with the help of my friends and the staff throughout the College, I feel more than capable. For me, it’s just a matter of finding the balance all while getting out there and doing the things I didn’t have the chance to do in Saint-Jean.

This past weekend, the Royal Military College of Canada held its annual Reunion Weekend. The event was packed with excitement, emotional tributes of remembrance, and countless old friendships coming back together.

The weekend kicked off with the Obstacle Course on Friday afternoon. Signifying the end of their FYOP period, First Year Cadets from all 12 squadrons took on the challenge that is the RMC Obstacle Course. Being someone from RMC Saint-Jean, I was taken away by the energy and atmosphere of everyone before the course started. Cars were turned into boats and, at one point, I was caught off guard at the sight of chickens roaming the parade square.

When the First Years took off, it was amazing to watch them work together and put everything they had into each obstacle. As I was watching them work together, I took a moment to reflect on how much they had come since the beginning of FYOP. They were no longer individuals, just one large team. It was incredible to see it from a different point of view.

The following morning, the entire school got together and formally welcomed the First Years into the Cadet Wing during their Badging Parade. What started off as a nice parade quickly turned around as the clouds moved away and the temperature rose. I was shocked at how well the First Years managed to take on the heat during their first actual military parade. Even for those who were in Fourth Year, this one was tough. But, before we knew it, the parade was over and the First Years rejoiced together and spent time with their families.

Shortly after the parade, I had the opportunity of observing the Wall of Honour ceremony. This, for me, was one of the most emotional and moving ceremonies I had ever been to. At the beginning of the ceremony, RMC Class of ‘63 handed off the responsibility of the wall to RMC Class of ‘75.

Following this, 2375 Lieutenant-Colonel Bruce “Ike” Buchanan had his plaque erected on the wall, recognizing his actions that went beyond the call of duty and perfectly demonstrated the real meaning of living a life by the College’s motto, Truth. Duty. Valour.

The entire ceremony was both incredibly inspiring and emotional. While going over LCol Buchanan’s biography, I got goosebumps. When his family went up to speak about his plaque being put up, you could hear the emotion in their voices.

Following the small ceremony, I was able to speak to 4610 Gus Nelson, Class of ‘59, on the event and the importance of recognizing these people. In short, he explained that events like this bring back a lot of memories. He talked about the friends he made at RMC, the ones he was able to stay in touch with, and the ones who he wasn’t able to. All in all, however, he stated that these kinds of events are “good for Canada”, and explained to me how important they really are.

Finally, the weekend ended with the Memorial Arch Parade, where the Old Brigade and ‘younger’ Ex Cadets made their way around the campus. For me, this was an amazing opportunity to embrace the heritage and history of RMC. The Old Brigade & Ex Cadets soon met with us on the Parade Square and we exchanged three cheers for each other. And, to top it off, the entire parade, with all the mite they had, sang out the RMC Cheer.

Overall, this weekend was unexplainable. Seeing the past classes march by, hearing them tell us their stories, listening to them talk about the ones they lost, and receiving their wishes of good luck made me realize that RMC is more than just a school; it’s a family.

What else is happening on the peninsula & area