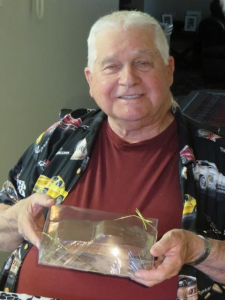 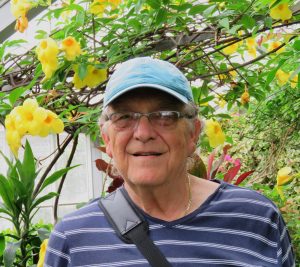 4806 John Whitaker recently reconnected with his best friend, Bob Barg from high school days. Bob found an old letter that John had sent him during October of John’s recruit year – ’56.

“It’s amazing how we think at 18.  It tells of the trials and tribulations of getting settled at RMC, passing off the square, doubling the square, etc”, said the Class of 1960 graduate.

“Bob took a different life route than I did, most dramatically becoming a semi-professional car racer; his specialty – Trans-Am Racing for just over 12 years with the Trans-Am Series.”

Later on, Bob, became a Collections Officer with Canada Revenue Agency (CRA). A position he held for over 15 years.

He is now retired and lives in Coquitlam, British Columbia.

John on the other hand, spent 18 years as an aircraft engineer in the RCAF; another 12 years and three months – as an executive in the Canadian Coast Guard; and finally as a writer and published author for the past 22 plus years.

The 1965 teachers / staff from St. Catharines Collegiate Institute would undoubtedly be proud of both these two graduates from that year.

So how was a letter sent over 60 years ago is returned to sender?

“The letter coming back to me was quite a surprise.  For some reason Bob kept it for 60+ years.  One day I got an e-mail from him asking if I would like to have the letter – which, of course, I did.  We only met for one short period after I went to RMC.  The next time we re-connected was about a year ago when I found him on “Classmates.”  I felt quite honoured that he kept the letter all those years.”

Note: We have reproduced the letter from the original hand written version:

How’s the boy?  Sorry I didn’t get a chance to write sooner but it is very busy here.  We get up at 6:15 in the morning and work right through to 11:00 at night.  I’m just now getting used to not having enough sleep.  It sure is a place to get in shape.

The damn seniors were pretty rough on it at first.  I’ll give you an example.  The first morning I was here I was sleeping soundly at 6:16 when some senior came into my room to wake me up.  I could hardly see and when he came in he said “Recruit, snap to attention when a senior enters your room.”  Ha I could hardly stand up and was so mad that I nearly told him to go to hell.

We have some very curious traditions around here.  The first is running across the square.  Every time we come to the parade square we have to halt smartly and double across.  It’s 185 yards long so we get quite a long run.  We also have to do circles.  If we do anything wrong like having a little dust in our rooms or on our uniforms we have to run 1, 2 or 3 circles.  A circle is once around a quarter mile track i.e. four circles make one mile.  Some nights I had nine to run so before I got into shape I was pretty tired after 9 circles.  Now it’s just a bother because they waste time.

We have some really good sports here.  There are two brothers in track who were offered positions on the Olympic team.  One can run the hundred yards in about 9:5.  The senior football team is terrific.  There are no really big players because none of them get a chance to get as fat as Butryn but they go out and drive from start to finish and gradually because of their conditioning wear the other teams down.

We have compulsory sports here that is intersquadron sports.  On the sports field everybody in equal and you can knock a senior down as well as anybody else.  When you get to know them, the seniors are pretty good shits.  They have to be hard on us or they will get hell themselves.

How’s your love life Bob old man.  I suppose you still don’t associate with the opposite sex you silly meathead.  You don’t know what your missing.  Remember some day somebody’s going to nail you good.

How are Pete, Went, Mike and all the old boys getting along?  Do you still fart around in Sharp’s old car or is he too tied up with his wife.  Remember I’ll be home next weekend to check on you.  I hope to get a chance to see you but I’m going to be pretty busy ha!

You doing any homework lately or have sports been taking up too much time?  I wish you would do some bloody work.

I guess Harry is giving you a pretty rough time.

Well I guess it’s about time I did some schoolwork we have about 5 mid-term tests next week.

You had better write and tell me about home.

See you this week-end.

p.s. You got my address I hope.