‘The Winter Olympics as you’ve never imagined them’

As I write this, I am in the final proofing stages of Flapper Goldenshoes, my new adventure novel/modern fable which is to be launched the evening of Friday, November 10th (starting at 5:00 p.m.) with the opening of the Stratford Rotary’s annual Christmas Craft Festival out at the Rotary Complex. The Craft Festival runs from November 10th through to Sunday, November 12th.

I introduced this story first back in 1980 when I coined the name ‘Flapper Goldenshoe’ for the feature character in a comic strip I created as part of a children’s activity page (Mr. C’s Kids Carnival) for The Yarmouth Vanguard. Flapper is a young penguin who has high ambitions to become a Winter Olympics athlete. Because of how Life sometimes deals the cards, I had to shelve the story until moving back to Stratford in 2009. My son Chris persuaded me that this story deserved to be completed – in book form – before the next Winter Olympics. That was three years ago while I was still working towards completing The Great Peanut Caper. As you know, the ‘next’ Winter Olympics are being held next February, 2018, in Korea.

The Synopsis of this tale is as follows:

The disappearance of a World and Winter Olympics champion just days prior to the opening of another Winter Games throws the sports world into disarray. Fans around the globe are shaken to think such could happen to one of their heroes. Out of it however, cub reporter, Percy Pierpont, finds himself with a story that has no ending as he and his buddy Hogey Truffles prepare to graduate from high school.
Years later, and totally unexpectedly, news surfaces from one of the globe’s remotest regions that, at last, the long-lost champion has been found. Not only has he resurfaced, but he is heavily involved once again, in none other than another Winter Olympics. What’s the story?
Without any hesitation and with their bags packed, the intrepid and now highly acclaimed duo of investigative reporter Percy Pierpont, and photographer Hogey Truffles of The Tidesville Daily Trough are off to corner another scoop.
Along the way, they encounter an unlikely cast of characters. One of these is Flapper Goldenshoes, a young penguin who has high ambitions to become a Winter Olympic athlete. Already he is creating quite a sensation at various competitions leading up to the next Winter Games. Why? Because each time he competes, he does so in an entirely different winter sport. What is this young man up to? What’s that story?
It is only a matter of time until all becomes clear. The International Federation of Olympic Sports (known world-wide simply as IFOOS – pronounced ‘ee-foos’) – announces that the first-ever winter sports decathlon will be held at the Winter Olympics in two years time. And it will be held in Antarctica.

“Of this story editor John Lederman surprised me with the following unexpected assessment after reading the manuscript:

‘What I love about it is that it is ‘peopled’ by good people, with good hearts, who are kind, considerate, and work and live with integrity. It really is a marvellous book and story. Rich in characterization and description, and in the intricacy of the plot, I like the shifting scenes and the time-lines too. They work well and add a complexity of interest to the story that engages and makes the mind work. … ”

“Flapper Goldenshoes is both a sequel to The Great Peanut Caper (launched in November, 2015 and now in its sixth printing) and another stand-alone adventure novel/modern fable appealing to anyone 11+ and older, particularly if they have an interest in the Winter Olympics, no matter their age. This is a 400+ page novel.

“The Great Peanut Caper itself is now scattered across this country from Victoria and Nanaimo to Iqaluit and Cape Dorset to Winnipeg and Ottawa and Halifax and Yarmouth and has, I have been told, been sent by several readers to friends in Brazil, Australia, Sweden, Scotland, England, and the United States. As well it has been acquired by the Stratford Public Library and is in the libraries of eighteen community and area schools.

“The illustration above is the recently completed front cover motif for Flapper Goldenshoes. Here are some of the illustrations which will highlight the story: 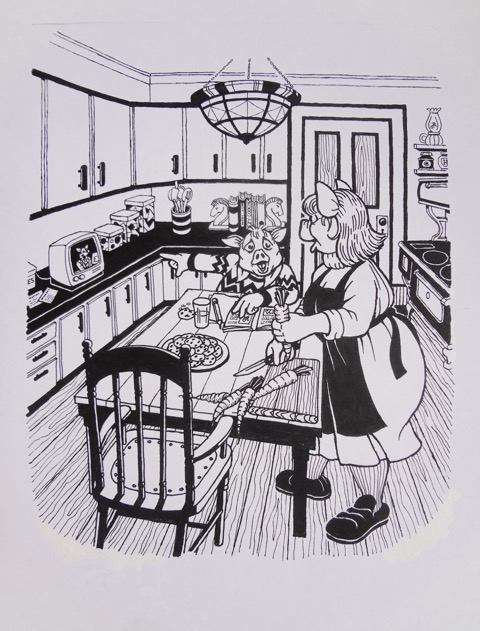 “Mystery, disasters, dreams, determination, and diversity are the elements which hold this story together. Thus the caption at the top: ‘The Winter Olympics as you’ve never imagined them’.”