The Canadian Legion is issuing a pin this year commemorating the 25th Anniversary of the Battle – it has not yet been put in circulation. In the light of possible future UN deployments this was a great talk and sobering reminder of the violence that sometimes accompanies United Nations peacekeeping.

Colonel Calvin and the Challenges of Peace Enforcement 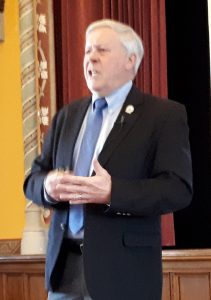 Jim Calvin expanding on a point during his presentation.

Last Friday, in a continuing series of guest speakers, the French and English history of peacekeeping students had the unique opportunity to hear from 9746 Colonel (retired) John Calvin, an RMC graduate – Class of 1973, about his experiences during the United Nations Protection Force (UNPROFOR) peacekeeping mission in Croatia.

An accomplished officer, the retired Colonel began his presentation by christening the ground and briefly outlining the background to the conflict and the major events that warranted a UN response. He then spoke to his mandate as a battalion commander and outlined his battalion’s positions, Area of Responsibility (AoR) and primary objectives on the ground.

During the presentation, the decorated infantry officer spoke to what he described as the most important tactical task on the battlefield, presence operations. For his battalion, this included setting up checkpoints and mounting regular patrols to demonstrate to the belligerent sides that the UN was indeed enforcing boundaries.

One interesting challenge that Colonel Calvin described was that, due to personnel shortages, a significant portion of his battalion had to be augmented by reserves, including several of his subordinate commanders. Furthermore, they only had about two months to train before the battalion was set to deploy to Europe.

Despite these obstacles, the former battalion commander said that the reserves performed well within the battalion and that his regular soldiers were professional and worked hard to accomplish the mission.

Colonel Calvin also spoke to the most challenging part of the mission, the battalion’s operations at the Medak Pocket. During this tense operation, his soldiers were shot at and sustained casualties and were witness to atrocities and signs of ethnic genocide.

When concluding his presentation, the Colonel spoke to the professionalism and competence of Canadian soldiers. He mentioned that Canadians are often among the best-equipped, best-trained, and most effective soldiers on UN operations. He noted that Canadian NCOs demonstrate strong leadership abilities and can inspire their soldiers. It was for this reason, he said, that Canadians are often chosen to complete the most difficult tasks on several operations.

We recently had the opportunity to read an article which in many ways is applicable, in particular, to potential leaders (such as RMC cadets) and to other military leaders, at all levels.

In our view, a ‘should read’ for everyone who is and / or will be a leader (at any level) and part of a team.

Most cadets (and current leaders) will quickly relate to the challenges that the author describes in a smooth and very well written style.

I & II Years – No formal presentations

Third year officer cadets participated in a professional development session last Wednesday morning. The first part of the session was devoted to the topic of the influence of social and general media on the military organisation. Captain Campbell, public affairs officer, presented the benefits of social media, but also the dangers related to their use. She also established a connection between the media, which are powerful resources to spread information, and the military institution. She notably insisted on the fact that public opinion toward Canadian Armed Forces highly depends on their appearance in the media. The second part of the session was more interactive; officer cadets were invited to express themselves in front of their fellow members for a one-minute presentation on various subjects. When the student was done his presentation, a comment period accentuated the strong points of the speech and those requiring work. This exercise helped to understand the difficulty inherent in public speaking.

On 14 Mar, the 4th year OCdt/NCdts met with their respective Div Commanders for an hour IOT discuss how the Divs were functioning. These meetings touched on such topics as the passage of information up and down the chain of command, the Divs’ placement in the Commandant’s Cup, and general inquiries into the state of affairs moving forward. After this, the OCdt/NCdts split into their various SQNs in order to meet with their respective SQN Commanders for the second hour of PD. Again, this meeting was held to allow the leadership to question the SQNs and be questioned by the SQNs as to how the SQNs were performing at this time. 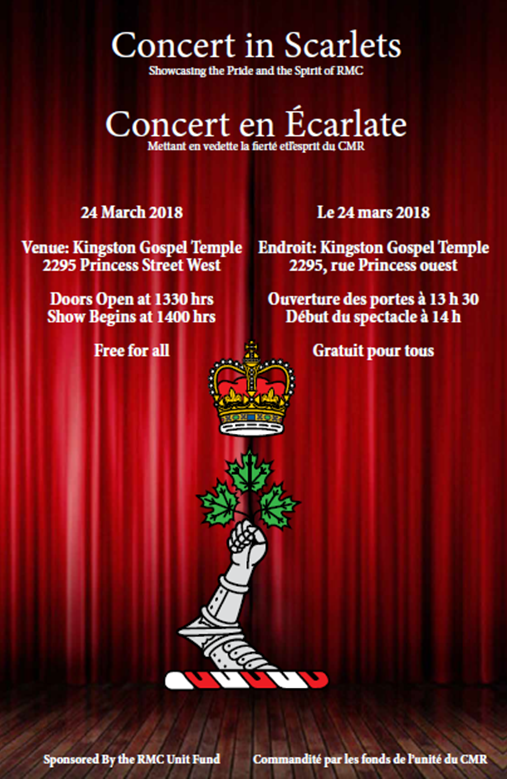 Prep for the Concert in scarlets 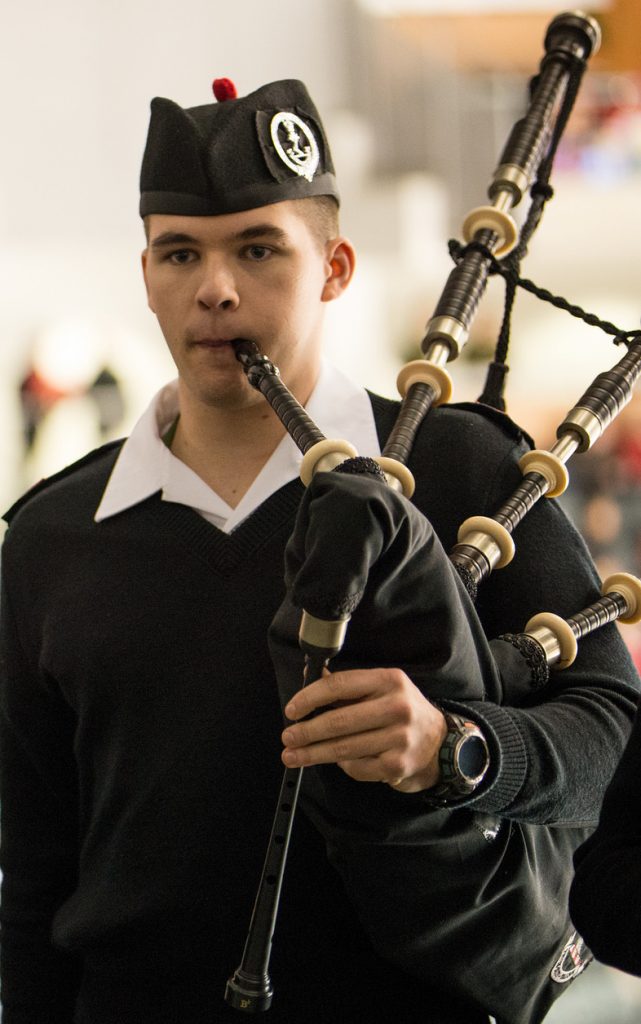 The Concert in Scarlets is one of the major events for all of the band. It is important that plenty of practice go into the concert for the performance to go well. There is plenty of planning and practice in each section of the band to make sure that the concert runs smoothly.

Preparation for the concert is year-round for the sections; however, the practices ramp up closer to the event to ensure that the people that are preforming at the concert are ready. This applies to all of the sections of the band, whether it be the choir, brass and reed, or the drummers and pipers, all sections put in extra time to make sure they sound the best they can. It is also the coordination between the sections that offer the best results for the concert. When the band works together, such as when there are combined practices, a better knowledge is able to be spread between the sections insuring optimal results.

As for the practice side, all sections are working hard, and this can be seen through my perspective in the pipe section. With the concert quickly approaching, the pipe section has more practices. There are practices during each day of the week in preparation; tunes are rehearsed and final adjustments are made. As mentioned before, joint practices are key to success which is where both pipers and drummers conduct practices together to iron out all of the kinks before the concert.

A combined effort of the band will be held in the upcoming week where the concert will be rehearsed at RMC to make sure that a general knowledge of the set list is known, and everyone knows when they will perform.

Since the Concert in Scarlets is such a big gig for the band to perform, it is essential that there is plenty of preparation in order to have a successful concert. It is thus key that the band plans, practices, and communicates to make sure that the there is the smoothest performance possible.