BGen Bouchard could not have but it more fittingly when he asked the 4th year class of Officer Cadets if they had felt something new, something different come over the RMC campus over the past week and a half upon returning for barmen workshops, in clearance, academic registration, varsity camps, and the first week of FYOP.

Indeed, our perspective is being thrown through the ringer: there is a breath of fresh life and energy that has been breathed into the college, a spirit of motivation that is enlivening the driven individuals in the student body and faculty and inspiring others to achieve the things they might have never considered possible.

During his brief to the graduating class of 2018 Friday morning, the commandant stressed the imperative of the fourth years as an example to the other officer cadets at the college.

Never again will we have the luxury of trying to pass unnoticed and mediocre—everything we do will be analyzed, admired, criticized, imitated, or modeled by turns by those we lead.

“You will be thought of and treated like Second Lieutenants,” and this attitude should enable us to take on the initiative and authority required to garner the appropriate respect and trust of our troops at the college, whether that be a peer group, div, squadron, sports team, band component, or section, and further once we are in place at postings and in commands of detachments, wings, and naval vessels.

OCdt McDonnell, 27520, (IV), noted that “the brief was very enlightening as to the new changes made around the college and uplifting to the fourth year class. A great way to get us to the start thinking like professional officers rather than simply officers in training.” 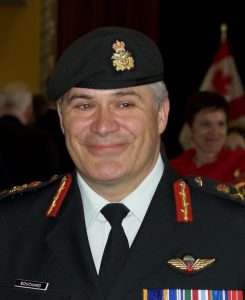 The first year straight-shooting commandant continued to capture the full attention of his audience:

“I was once asked by a journalist what was the effect of the States on RMC,” he recounted to the fourth years. “I asked, ‘what do you want me to say? That I will make RMC great again?’” to which the entire Currie Hall erupted into laughter.

On a more serious note once the audience settled, however, BGen Bouchard added, “I hope to make it great-er, for it is already great.”

His words both encouraged and stimulated our enthusiasm for stepping into our final year, with the courage to stand by the right decisions and enforce the standards that guard that greatness, so we can truly embrace the one and only true motto of RMC, for which past cadets have fought and died: Truth. Duty. Valour.