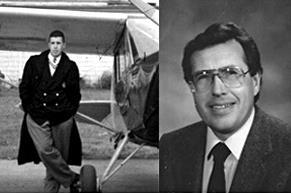 An educator in the Cowichan Valley and flying instructor in Victoria and Nanaimo, he was a life-member of the Duncan Flying Club. An avid reader, he was interested in everything, particularly in the people he met and their lives.

Born in Temiscaming, Quebec, he joined Canada Services College Royal Roads from 1956-58 where he met his soulmate, Valerie, with whom he spent the next 55 happy years. He was a kind, gentle soul, and a wonderful, loving father to three daughters.

Hockey, boating, flying and travelling were his passions. He visited many parts of the globe which included many air museums! He is survived by his sister, Lola, (Cobden, Ontario), many nieces and nephews, his wife Valerie and their three daughters, Melissa (Dave), Monica, Heidi and his cat ‘Meeko’. Condolences may be offered to the family at www.mccallgardens.com

HALE, Commander (Ret’d.) Alan W. G. “Casey”, P.Eng. CD
September 25, 1936 – Bentley, Alberta – May 30, 2018 – Calgary, Alberta
Casey Hale passed away on May 30, 2018 at the age of 81 years. Casey is lovingly remembered by his wife of fifty-five years, Donna (nee Reilly), his sisters Yvonne Sherman and Lilyon (Neil) Lunty, sister-in- law Jollean (Ken) Sivertsen; children Shannon and Marjorie Hale and Marvin (April), Marcia and Rhonda DeJong; and grandchildren Kim, Jon, Hope, Willem, Lucas, Reece and Griffin; as well as numerous nieces and nephews and his many friends from CMR Saint-Jean, HMCS Tecumseh, and Gulf Canada Resources Limited. A celebration of Casey’s life will be held at HMCS Tecumseh (1820 – 24 Street SW, Calgary, AB, T2T-0G6; on the drill deck, which is wheelchair accessible), on Saturday, June 9, 2018 at 4:00 p.m. Condolences may be forwarded through www.mcinnisandholloway.com. Casey’s family would like to thank Glenn Cameron for his compassionate care and friendship in Casey’s final months; Lisa Bailey for her guidance and friendship; and the staff of the Colonel Belcher. If friends so desire, memorial tributes may be made directly to the Naval Museum of Alberta Society (c/o HMCS Tecumseh 1820 – 24th Street S.W. Calgary, AB T2T 0G6, Telephone: 403-242-0002  In living memory of Casey Hale, a tree will be planted at Fish Creek Provincial Park.