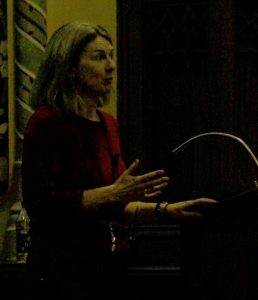 On Monday evening this past week there was a public lecture given by Dr. Barbara Zeeb to officially celebrate her winning the Cowan Prize for Excellence in Research.

The Cowan Prize is awarded annually to a member of the RMC faculty for distinction in the field of research.  During the convocation ceremony this past May it was announced that Dr. Zeeb of the Department of Chemistry and Chemical Engineering had won the prize for 2018.

Our Principal, Dr. Harry Kowal, opened the proceedings with a word of welcome, recognition of special guests including past recipients, and an explanation of the context of this special prize.  Dr. Cecile Malardier-Jugroot, her Department Head, presented Dr. Zeeb’s biography and introduced her to the audience.

Dr. Zeeb’s talk was entitled, “The Phyte Club: Using Plants to assist with the Remediation of Contaminated Sites.”  She began by observing that, “contrary to the first rule of Phyte Club, we’re going to talk about Phyte Club!” Her talk revealed the tremendous scope of the effort that she and her collaborators and students have made towards the remediation of sites contaminated over decades by defence and industrial activity.  She and her team have travelled literally to every corner of our country, and to several others, as they have innovated and quantitatively experimented with scores of different plant species to determine the most efficient ways of removing various toxic substances from soils:  metals, PCBs, petrochemicals, salt, etc. She also stressed that the methods she uses are not, relatively speaking, fast-acting. “It’s taken decades for these sites to get the way they are. Anything less than a decade in cleaning them up is pretty good!” And while making great discoveries about native species that can remedy soils, publishing dozens of journal articles, attracting research funding to RMC, and training many graduate students, she has also been a leader in the successful remediation of many formerly-contaminated sites and the on-going remediation of many more.  Dr. Zeeb also stressed the importance of her students to the work she leads them in.

Dr. John Scott Cowan, one of our former Principals, endowed the prize as a means of highlighting the vast amount of research taking place at RMC, with one of the prize’s objectives being to increase public awareness of this research.  As he has explained in past years at the introduction to these talks, this prize complements the other major annual academic prize at RMC, the Class of 65 Teaching Excellence Award, both of which encourage essential disciplines of a university.  However these talks also show that research excellence is intimately coupled to teaching excellence, and Dr. Zeeb’s talk was no exception.  It was a very engaging presentation, well-prepared, and with technical information that was also explained so that everyone could understand and learn.

The talk was attended by about sixty guests and was followed by an informal gathering in Baronial Hall.  RMC appreciates the efforts of the many people who worked to make the evening a success and offer our heartfelt congratulations to Dr. Zeeb.  The RMC Foundation is especially thanked for supporting the event.

21407 Jen Causey: Regardless of title, people are still people