Article by – WO Chuck Ansell 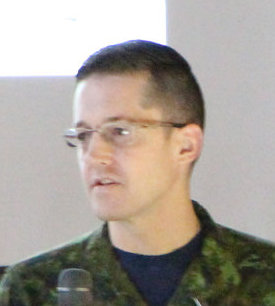 This story is certainly not specific to any one group, rather the Canadian Forces as a whole, but I am only able to speak about the experiences of myself and our Team. Being a seasoned Warrant Officer, I have noticed a shift in Canada’s opinion of the Military. I believe the shift came when our troops were deployed to Afghanistan and the support for those in harm’s way was increasing quickly. An example of this is the Highway of Heroes (the stretch of the 401 from Trenton to Toronto). I don’t know if there is a Military member who hasn’t been thanked by a civilian when wearing a uniform off base. How does this pertain to the Nijmegen Team you ask? Well, I will try to paint a picture throughout this article.

The Team stepped off from RMCC and headed east along Highway 2. We had marched this route before, but turned around at the McLachlan Woodworking Museum. This time, we just had a quick water stop there and continued east to Gananoque. The distance is only 28Km from RMC so, we weaved in and out of side streets and over the 401 to make up the additional 12Kms. We were picked up at the Casino and brought home. The following day, we started at the Casino and headed east along the Thousand Island Parkway. It was a beautiful, hot, clear day so the Team was flying through their water supply. We had a handful of stops during the first 10Kms and pressed on from there, gradually increasing our time between breaks. Our uniforms were soaked and our feet hurt. I could feel the sun burning the back of my neck and our packs were feeling heavier with each step. As we pushed forward, I noticed every second or third car were honking their horns and waving when they passed us. All the pedestrians we encountered on the trail said “thank you” as we marched by. One car had done a little more than wave and a person took a picture as we moved forward. The people we passed or who had driven by didn’t know who we were or what we were doing, just that a group of fourteen military folks were taking a walk down the Parkway.

Canadians have always been the “silent professionals”. We don’t make a big production out of anything we do. This is apparent by the medals that are earned. There are combat seasoned members who will retire with two medals…the CD and a campaign star. We don’t wear flashy items on our uniform or throw our service in anyone’s face. We know who we are and it feels good just putting on the uniform. The back-to-back marches had beaten us down. We were hot, sweaty and tired, but every time a car drove by and honked, our heads picked up a little bit more. The spring in our step increased ever so slightly and we smiled to ourselves. Being a Soldier, Sailor, or Aviator is pride enough, but having a complete stranger show their appreciation adds to it and gives us much needed boosts of energy that carry us to the end.

Summer on the peninsula: Most cadets wouldn't recognize it!