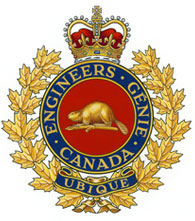 On January 25th 2017, a destructive ice storm hit the Acadian Peninsula in Northern New Brunswick. The ice storm damaged or destroyed over 400 transmission poles and left 22,000 citizens without power. By January 29th the situation had not significantly improved and the Province of New Brunswick requested support from the Government of Canada in the form of Canadian Armed Forces (CAF) personnel and equipment. By first light on January 30, 2017, the main body, led by combat engineers, commonly referred to as ‘Sappers’ from 4 Engineer Support Regiment (4 ESR) were rolling through the affected towns offering assurance to the local population. By the end of that same day, the 200 person Joint Task Force–Atlantic (JTF-A) Immediate Response Unit (IRU) Vanguard Company was in place in the town of Lameque and prepared to support emergency relief operations.

The IRU lead alternates in Atlantic Canada between 4th Artillery Regiment (General Support) (4th Regt (GS)) and 4 ESR, both based out of 5 Canadian Division Support Base (5 CDSB) Gagetown. At the time of the January ice storm, 4th Regt (GS) had the lead and deployed the bulk of the Vanguard Company. The request was made by 4th Regt (GS) to the Commanding Officer 4 ESR to provide a troop sized element in order to have engineer specific capabilities on the ground. This composite troop was generated from 42 Horizontal Construction Squadron with support from the entire regiment which included a headquarters, reinforced reconnaissance detachment, two field sections, a heavy equipment section, and an integral Mobile Repair Team (MRT) provided by 48 Combat Service Support Squadron. Subsequently, 4 ESR would also deploy a Geospatial Support Team (GST) with two Geomatics Techs and additional officers to supplement the Vanguard Coy headquarters. In total, the composite troop numbered 38 personnel and 32 vehicles.

The composite troop would remain on the ground to provide both engineer specific and general support throughout the operation until its termination on February 6, 2017. Specifically, the combat engineers provided three unique capabilities to the Vanguard. The first was with their reinforced reconnaissance detachment. With two senior non-commission officer and four junior members, the detachment was able to split into two teams and survey every main and secondary route in the area of operations. In total they would complete over 1600 kilometres of route confirmation recording obstacles on the roads, downed power lines and transmission poles, and contact local community centres in order to network with the people that needed help most. Their data was given to the Company Headquarters and was crucial in the planning of subsequent tasks. Secondly, the Sappers did what Sappers do best: work hard. With their chainsaws, integral Light Armoured Vehicles and the support of the Heavy Equipment assets, the field sections went to work clearing obstacles on roads, removing hazards that would impede access to houses for emergency vehicles, working with New Brunswick (NB) Power to remove damaged poles and cables and going door to door delivering water and firewood to those in need. Lastly, the assets in the GST allowed the Vanguard to create and print their own geospatial products to include aerial imagery for the liaison zone for the Prime Minister, power outage map overlays and topographical maps for the troops on the ground. 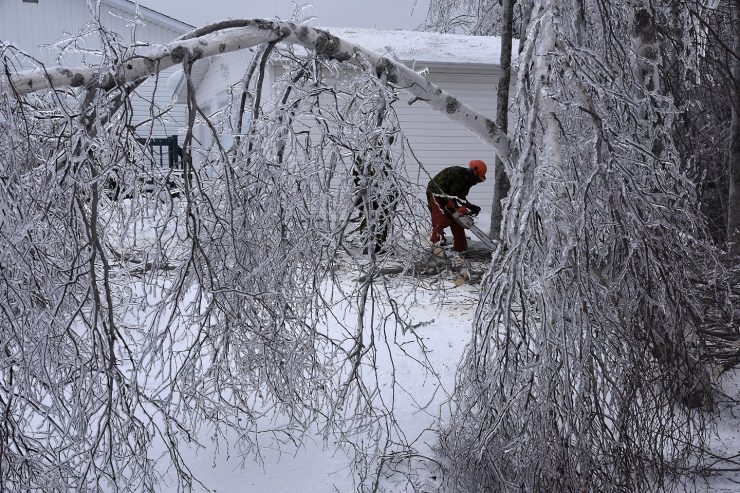 Members of 4 Engineer Support Regiment (4 ESR) remove fallen tree branches and damaged trees that could cause a safety concern as one of the many tasks during Operation LENTUS in the Acadian Peninsula of New Brunswick on 31 January 2017.
Approximately 200 Canadian Armed Forces members are supporting the ongoing emergency response to the ice storm in New Brunswick.
The Province of New Brunswick asked for Government of Canada assistance on January 29, 2017. The CAF is conducting a variety of tasks, including delivering emergency supplies, helping to re-establish existing road networks, and supporting door-to-door residential wellbeing checks in the Northeast of the province.

Throughout Op LENTUS 17-01, the task force would go door to door to over 5400 homes, delivering 34 truckloads of firewood, support NB Power clearing operations and provide peace of mind to the citizens most affected in the Acadian Peninsula, some of whom went 10 days without power. 4 ESR’s Sappers and Officers played a significant role in Vanguard Company’s operations and are very proud of what was accomplished.