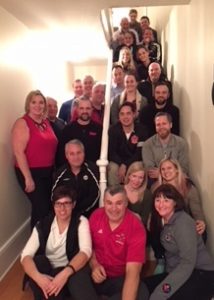 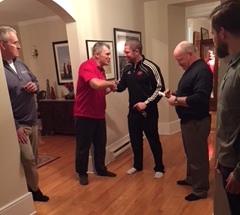 On November 29, RMC Commandant, BGen Sébastien Bouchard and his wife Karine Chayer hosted the Athletic Department staff for a small reception at their residence.  It was the first time many of the staff had been inside the Commandant’s residence and they thoroughly enjoyed the evening.  “BGen Bouchard and Karine have been strong supporters of the Athletic Department since they arrived on campus,” said Darren Cates, Director Athletics, “This gave our staff an opportunity to chat with them in an informal setting and it was greatly appreciated by everyone”

During the reception, BGen Bouchard presented Craig Palmer, Evaluations Coordinator / PE Teacher (PSP) with a Commandant’s Coin for his hard work and dedication.

“Since Craig started as Evaluations Coordinator here several years back he has put in a significant amount of time and effort, often times well outside of normal working hours, in order to not only optimize the current evaluation process but also researching and testing new and potentially more effective evaluation protocols.

More recently you can find Craig in the Field House testing a laser gated modified agility run or an electronic device for measuring push ups.  The fruits of his efforts could be seen during the 2.4km run as well as the Harrier Race in which Craig researched, acquired and put into action the new electronic timing system and with great success. Along with all of the above, Craig is the first person to help out where needed without asking for anything in return.”

All in all, it was a very pleasant evening, for all in attendance.

A couple of real pros leading the band; pipes & drums

Comments from an enlightened readership...