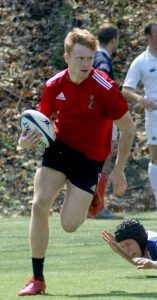 The CGA Bears jumped out to a 12-0 lead by the end of the first half before the Paladins responded. Local rookie Josh Andrews streaked through the Coast Guard defense and put the ball down between the posts before kicking the convert to narrow the score to 12-7. Montreal native Sebastien Dion got the ball of out of a scrum and beat his man to the near sideline to tie the game. With no time left on the clock, Andrews kicked the tight-angled conversion to win the game. 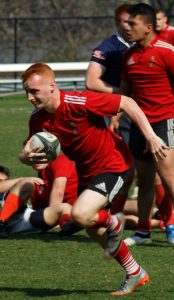 RMC’s pool contained Army 2, Navy 1, and the Virginia Military Institute. In the first match of the day, RMC came up against tough competition from the host school. Army 2 went ahead 10-0 early on, before rookie Konur Tholl put RMC on the scoreboard with a try of his own. The fast-paced match ended 31-5 for Army 2.

Navy 1 was RMC’s next opponent Saturday morning. The Midshipmen from Annapolis earned a 36-0 victory over the Paladins in a hard-fought match.

Against VMI in the final match of pool play, third year Braeden de Waal put the ball down for a try to culminate an offensive surge from the Paladins in the first half. Despite a strong effort from RMC throughout the match, the Keydets pulled away to finish with a 33-5 win.

After going 0-3 in their pool, RMC squared off with Air Force in the consolation semi-final. With the Falcons going ahead early, the Paladins responded late in the game with a try. Andrews showed off his speed with a fantastic individual effort. After receiving the ball inside his own five metre line, Andrews booted the ball down field, outracing everyone to collect his own kick and score.

RMC finished the day with their win over the Coast Guard Academy in the 7th place game. Thank you to the RMC Foundation and donors for their gracious support that made this trip to the All-Academy 7’s Championship possible.

Summary of game results in order: