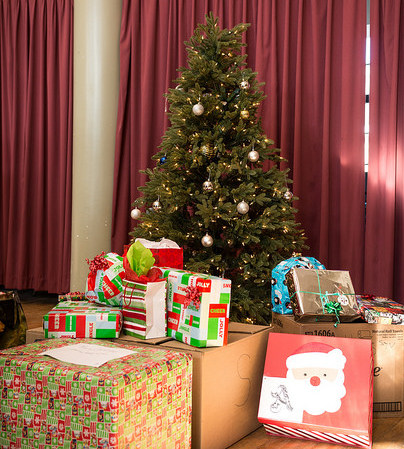 On 13 December, Cadets, TW Staff, and the RMC Chaplain Team gathered with the Commandant to deliver boxes of gifts that had been brought together by TW as the result of an initiative WO Ingraham, 2 Sqn NCO, challenged TW with just a few weeks earlier.  WO Ingraham approached me with the idea of sponsoring a local family with a goal of not only providing assistance to a local family in need, but to share with the Cadets the reality of the needs within the community and the joy found in giving.  At the end of the project eight different Squadrons and the TW Staff supported 10 families in the community, through two different organizations, Lionhearts Inc / Project Reinforcement and Padre Carter, for a family in the Syrian community.

The boxes of gifts gathered around the base of a Christmas Tree in the New Gym represented over $4,000 in funds, primarily donated by Cadets, that were turned into gifts and gift cards for families who may have otherwise been unable to provide anything more than the very basics for their children, or themselves.  The gifts purchased included all the usual items you might find under the tree or in a stocking, like mitts and toques, but also included gifts cards that would allow families to put fuel in their vehicle, extra food on the table and allow parents to have something for themselves.

Although we can all acknowledge the reality that there are families in need in our community, making the connection to them can be a bit more challenging; for that, we turned to Lionhearts Inc. (Exec Dir: Travis Blackmore), a local charity, who connected us with one of his sub-organizations, Project Reinforcement (Shawn Seargeant).

As we started the project we had five families that were being sponsored by four different Sqns and the TW Staff.  However, we soon had more Sqns on board and at the end of the project eight different Squadrons and the TW Staff were able to sponsor a total of 10 families; nine through Project Reinforcement and a Syrian family that Padre Carter was able to identify.  The boxes of gifts will be delivered in time for the Holiday Season.

The Commandant, the Executive Director of Lionhearts Inc, and Padre Carter, each shared with the Cadets and Staff how proud and grateful they were for the work of the Cadets, sharing also, how grateful the families in receipt of these gifts would be.  The Commandant, speaking specially to the Cadets, mentioned how we, as members of the CAF, are noted for taking actions like this whether it be at home or on deployment and how this and other initiatives that have been taken by the Cadets as we approached the Holiday Season continue a proud CAF tradition of helping those in need.

On behalf of the families, Project Reinforcement and the Chaplain Team, we give thanks for the initiative of WO Ingraham, and the amazing generosity and work done by TW, especially all the Cadets who were involved.