An Army family had relocated to Manchester, Connecticut after the head of the household, an infantry major, had completed a tour of duty at the Armor Center at Ft. Knox, Kentucky.  It was Spring 1956 and the major was deploying to Viet Nam.

The Military Advisory and Assistance Group (MAAG) established in French Indo-China by President Truman in 1950 to assist the French Army in integrating large amounts of U. S. equipment had reorganized in 1955.  This reorganization was a response to developments after the French Army’s defeat at the Battle of Dien Bien Phu and the consequent 1954 Geneva Accords that “temporarily” established a North and South Viet Nam, the government in the north being a communist regime. 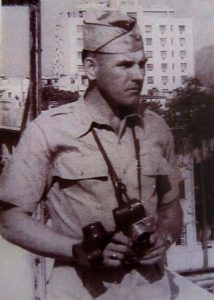 The reorganization of the MAAG in cooperation with the withdrawing French Army and the Army of the South Vietnamese state would focus on assisting the latter in absorbing a much increased quantity of U.S. military equipment and supply as well as applicable doctrinal training.  The MAAG was reinforced against this expanded mission.

The major was an ideal candidate for this work having served in deployed combat infantry units in the South Pacific War for over three years and in infantry maneuver units from platoon to regiment in the Continental U.S., the South Pacific and Germany.  He had commanded five companies the last being a training company and had served as an S-2 (intelligence officer) at battalion and regiment and as an S-4 (Supply and Logistics Officer) at battalion and regiment as well as having extensive enlisted service as a rifle company articifer, supply sergeant, platoon sergeant, and rifle company first sergeant.

In the case of intelligence work, the major was a graduate of the Tactical Intelligence Officer’s Course at the Army Ground School at Ft. Riley, Kansas.  And again he had practical experience having served as an infantry battalion S-2 in the U.S. and Germany and an infantry regiment assistant S-2 in Germany and at the Armored Center.

In the event, he would spend a significant portion of his thirteen month tour of duty with the MAAG as an advisor to the South Vietnamese Army’s Infantry School concentrating on tactical supply and logistical operations.  In the period of his absence his family would enjoy a practical experience in leadership as a displaced family unit and an education through the major’s deployment in the expanded U. S. post World War II global engagement—in this case to a part of the world at the time that few Americans were overly knowledgeable about.  Even at the time with the very large proportion of U.S. population who were military veterans, the vast majority of Americans had little to no knowledge of Viet Nam or its significance.

As it would happen, the family would not be completely separated from the Army community.  Though there were no large Army installations or garrisons in Connecticut at the time, the state had a rather large Army National Guard establishment with an infantry division headquarters, two infantry regiments and several other units organized in the state, one of the infantry battalion’s having its headquarters in the large 1930s era red brick Manchester Armory.

As well, the now advanced Cold War and known and developing Soviet strategic nuclear air attack capabilities had caused the U.S. to develop and field an extensive system of anti-aircraft missile air defenses.  These defenses were in the form of the initially fielded Nike Ajax then improved Nike Hercules systems.

Manchester, Connecticut was within a substantial missile defense area and an air defense artillery organization positioned to protect the then critical aerospace and tactical weapons industrial complex located throughout the greater Hartford, Connecticut area.  The house the major had purchased to reside his family in while he was deployed was a new construction development that was bracketed by installations manned by elements of the Regular Army’s 2nd Battalion, 55th Air Defense Artillery.  Regular military vehicle traffic along the road in front of the property gave the military family that had been residing in military garrisons in the U. S. and Germany for the previous six years a curious sense of comfort.  This was  especially the case with the distinctive roar of the M35 2 ½ ton trucks’ engines as they went by the house.

But, despite the coincidental substantial presence of the Army in its Regular Army and Army National Guard guises in Manchester, there wasn’t an existing mechanism of military community in place and one did not develop during the family’s stay.  The major’s wife would be very much on her own for her affairs.  For any significant  installation support, she did have a major naval installation at Groton Naval Base, Connecticut about a 45 minute drive south.  As well, a Strategic Air Command base was located at Westover Air Force Base about an hours drive north near Springfield, Massachusetts and a major Army post and garrison was located at Ft. Devens, Massachusetts, a two hour drive to the northeast.

But immediate community support would rest on relationships that could be established with neighbors, what support existed in the town and St. James Catholic Church and the major’s and his wife’s large families that resided in the greater Hartford and Connecticut Area—at the time their three surviving parents, 16 of their 23 siblings and their siblings spouses and children.  The major’s sister and her husband and children and a sister of his wife’s and her husband and children lived in the town.  All but one, or 15 of the family men, were veterans.

Even with this seemingly extensive family support network, Manchester was a large town geographically and Hartford County was also organized with an extended geography.   And everyone worked, all the wives and husbands held down jobs in the industries in the area.  The working members of the families in Manchester commuted to Hartford. to their places of employment.  Cell phones didn’t exist—communication was by land line phone. During the week, particularly, any issues or emergencies that might develop would have to be handled by the major’s wife and any networks that she could develop with neighbors.

Though the major and his wife had planned as well as the situation and circumstances allowed to locate the family in the best supported environment possible for the 13 month Viet Nam tour of duty, there remained concerns.  Some of these rested on the situation described above–especially given that immediate assistance if an emergency developed by any family would be delayed.  And the major was leaving his wife with a 2, 7 and 9 year old, a just completed new build house and a new  construction zone behind the house.  And given the transportation capabilities of the time and the distance, the major’s ability to rejoin the family in any emergency would be a likely two to three day process at best.

Regardless of the best and most prudent planning, the major’s wife would be leading the family’s domestic parade solo for 13 months.  She would have to do all necessary to maintain and secure the household and meet the educational and child rearing responsibilities for three children whose ages spread from 2 to 9 years.   That meant dealing with all of the situations that 7 and 9 year old boys face in moving into a new neighborhood and school system.   In the event, the major’s wife had been as prepared as possible for the coming 13 months.  She adapted and took the reigns of leadership.  Situations did present that were challenging but she met them with ability and skill,  and she used her family network effectively.

She also had the challenge of keeping her husband’s persona alive and real to her children.  A critical part of that effort being to make sense about something out of the main stream American experience like Viet Nam.  In that latter case, she posted a three by four foot map of Viet Nam on the wall over the breakfast table in the kitchen.  In an age when the written letter was the primary means of communication, she and the major corresponded frequently and the weekly letters were shared with her children.  Also, the major sent his children monthly packages of items from Viet Nam—his presence remained real to his family, especially his children.

The 13 month separation was taken as an opportunity by the major and his wife.   All three children learned that Mom was a leader and had what it took to run the household a lesson reinforced by their father’s mother several towns over who was their grandfather’s business manager and a tough leader in her own right..  The lesson that a woman could lead the household and represent its interest in the community They learned that Dad was committed to the family, even though on the other side of the world.

And thanks to their mother’s and father’s approach to worldly education, they learned about a country, South Viet Nam, its culture and the challenges it faced.  They would have a better sense five years later of the developing situation in Viet Nam than many of their fellow Americans.