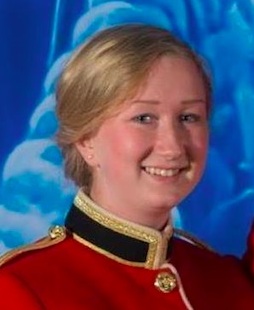 Burt is from a military family and got to experience a new location every four years while growing up. Living mainly in Ontario, she also spent time in Quebec and Germany.  Aside from learning French from her French-Canadian mother, Burt has a very high interest in foreign languages and has also learned Spanish, and believes she has an intermediate level of knowledge of Mandarin.

Spending time around so many books, Burt says that she most enjoys reading fiction. Reading about politics around the world, and different countries and cultures, she enjoys putting her knowledge of languages to use to read books in French or Spanish. She has a huge passion for learning about the world around her.

Burt enjoys working at RMC. Unlike other universities, our library is a bit smaller, and is more intimate and friendly. Being able to get to know some of the students, and working with a small staff of about twelve people in the library is a perk. Apparently the staff is almost like a second family.

She also loves how unique the RMC collection is with all of the historical and military publications. Our library is renowned throughout North America for our military history publications. A lot of people come and visit our collections for research.

Burt is very excited for the new upgrades coming to our library. Plans have been in the works for a few years now, and a lot of time has been spent trying to reduce the number of print items on the shelves. The library staff has been weeding out certain items that aren’t used very often, and as a lot of things are being put into electronic versions, designated items are being removed from the shelves. This will mean that the main floor of the library can be cleared out to make room for a learning commons with more computers, a quiet study area, and a game area with about eighteen games. The library is open to more suggestions, and she hopes that people will come out in the Fall and visit all of the new improvements.