Annual Badging Parade Notable for More Than One Reason 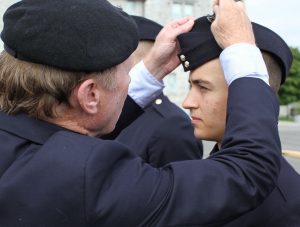 The First Year Badging Parade is always a special moment in the life of the College and this year’s parade was no different. When it was over, the Class of 2022 marched off the Parade Square with their respective squadrons as full-fledged members of the Cadet Wing and proudly sported the RMC Cap Badge as they did so.

The College family gathered to mark this event under a cloudless sky on a scorching hot day. The heat didn’t dampen the spirits of those present, either on the Parade Square or in the packed crowd in the bleachers. Family and friends were out in full force, as were various dignitaries and members of the Old Brigade, and they gave the Class of 2022 a rousing applause as the First Years marched onto the Parade Square. The Class of 2022 has come a long way in a very short period of time, and it showed in their drill and deportment.

As is tradition, the First Years each received their Cap Badge from a member of the Old Brigade (ex-Cadets who entered one of the Canadian Military Colleges more than fifty years ago). They stood where many have stood before them, including a number of those present in the bleachers. It’s certainly not hard for ex-Cadets to remember the pride the Class of 2022 felt today. This is the first of many significant milestones on their road to being commissioned officers and the pride they showed was well-earned.

After the RMC Padres gave the blessing “in the spirit of the religious freedom offered to each of us in this great country,” the Parade shifted into the awards presentation. (A full list of awards and recipients was not available at press time and will be made available when e-Veritas receives it.)

RMC Commandant 18777 BGen Sebastien Bouchard then addressed the Parade. “Congratulations to all FYOP flights!” he told the Class of 2022. “You guys have made it. The Obstacle Course yesterday tested your resilience and your leadership skills. You have demonstrated to the Wing that you deserve to be here.” He also addressed the Cadet Staff of the First Year Orientation Period (FYOP). “As FYOP leadership, you spared no effort. You challenged the First Years and you mentored them and kept them safe.”

BGen Bouchard closed his remarks by joking that, during his Badging Parade when he was a First Year, he didn’t remember anything the Commandant said. “I do not expect you to remember what I say today,” he assured the Cadets. “What I remember from my Parade is the people, the friends I made and many of whom I am still close with today. I hope that’s what you remember, too.”

9143 Capt (ret’d) Bruce McAlpine, President of the RMC Club, then addressed the Parade. “It is my pleasure to welcome you to the Wing,” he told the First Years. “I’d like to invite you to step back in time with me,” he went on,”to when you first entered a Canadian Armed Forces Recruiting Centre. From that moment, you have survived an extensive recruiting process, completed the first summer of your Basic Military Officer’s Qualification, and made it through FYOP. And now here you stand, proud but nervous. In three months you’ll go home for Christmas, but you won’t be the same. And in four years you’ll stand here on Grad Parade, where the Chief of the Defense Staff will entrust to you the lives of young Canadians and the Prime Minister will entrust you with the security of this country. And fifty years from now you’ll be back as members of the Old Brigade.”

“What makes this place special?” he asked. “The Four Pillars, which will hone your character over the next four years. You will build friendships and internalize the values of Truth, Duty, Valour while receiving an education which is second to none and which will prepare you to succeed. Throw yourself into it! It will pay off.” Capt (ret’d) Bruce McAlpine closed out his remarks by thanking the friends and family members who have played such an important role in helping the Class of 2022 make it this far.

The story of Badging Parade would typically end there, with the march past followed by the advance in columns of squadrons and the departure of the Commandant, the Colours, and finally the Wing, but this year’s Badging Parade was a little different. It was noteworthy for an unexpected announcement. As BGen Bouchard explained, at College parades you typically see Cadets wearing a variety of headgear, including the pith helmet and the pillbox. “This is the last time you will see it,” he told those present.

Thanks to a generous donation from 2652 Britt Smith (RMC 1938) through the RMC Foundation, “All RMC and CMR Cadets will wear the pith helmet on future parades.” As the Commandant explained, the helmets are on their way and are expected to arrive within the next few weeks. e-Veritas will certainly be there to cover the official change when it occurs so stay tuned!