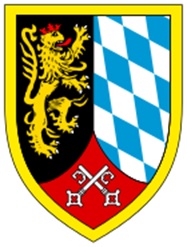 It was the beginning of the last decade of the cold war.  The North Atlantic Treaty Organization’s (NATO) theater allied ground force, from its garrisons throughout western Europe, was organized in the event of war into assigned general defense positions along the eastern West European border with the Soviet Bloc countries of eastern Europe. The allied NATO force available remained a massive multi-field army and army corps armored and mechanized force.  The U.S. Army alone had a deployed field army, 7th U.S. Army, with two corps, V and VII Corps, of two armored force divisions each, garrisoned in the West German states of Bavaria and Hesse.  Three additional separate maneuver brigades were in theater and additional divisions in the United States were earmarked to deploy rapidly to Europe if needed.  This reinforcement could include additional corps headquarters.

The massive scale of potential operations if the east-west situation deteriorated was daunting to consider.  For that reason, the U.S.., along with parallel initiatives by its allies in the NATO alliance, had been rebuilding and modernizing its heavy maneuver force, armored, mechanized, armored cavalry and self propelled artillery, on a massive scale with programs that had initiated in the beginning of the 1970 decade.

Many of these initiatives were now fielding in the deployed formations requiring company, battalion and brigade reorganization and training to accept and integrate the new tanks, infantry fighting vehicles and artillery and anti-tank systems into the formations.  It was an intensely busy program organizationally, training-wise and operationally.

In spite of all of the modernization, training and reorganization, there was no respite from the basic mission of preparedness to man the General Dense Position (GDP).  The Soviet Bloc forces were to be presented with a credible go to war readiness throughout the process.

In some units, the complexity and demands of mission task could be even more intense and demanding.  Such was the case for the 7th Army’s right or southern flank battalion.  The unit was a mechanized infantry battalion.  With its right flanking Bundeswehr battalion, the two allied battalions had the very critical and difficult additional mission of not only conducting the battle in their respective battle spaces but maintaining contact and securing the integrity of the boundary between their respective corps.

Force boundaries of this nature not well handled by the two flank units were exactly the points that attacking forces would attempt to exploit.  Historically, such force/large formation boundaries, especially with different national armies and armies that spoke different languages were notorious for providing attacking forces opportunities often due to the lack of operational coordination between the flanking units /battalions.

For this reason, there was an intense interest by the senior commanders in the two flanking armies to do all possible to develop and maintain exceptional relationships between the U.S. and German flanking battalions.  In this regard an aggressive partnership between the U.S. and German battalions had been initiated that included multiple headquarters and battalion combined maneuver exercises, small unit and soldier combined training and inter unit social engagement in form of military balls, dining ins and other events.  Additional combined maneuvers and densities at the Major Training Areas (MTAs) were allocated.

Yet, despite these efforts, a previous command cycle of the U.S. battalion had not been effective at sustaining an inter battalion relationship that achieved and sustained an operational capbility that the commands were comfortable with.  The U.S. battalion commander, a non-German speaker, had increasingly become estranged from the partner battalion to the extent that inter battalion interface practically ceased except for pro forma scheduled maneuver and command post exercises that proved problematic.

In early 1982 that changed, a native German speaking battalion commander and several German speaking subordinate officers and non-commissioned officers were assigned to the battalion.  The new commander’s guidance was to rebuild and optimize relationships with the partnership German battalion.  A few months later a new battalion executive officer (XO) was also assigned.  Shortly before the XO’s arrival the partnership battalion, Panzerbataillon 104, was assigned a new role in its parent brigade, Panzerbrigade 12.

Panzergrenadierbataillon122 became the new flank battalion and German partnership unit. However, the already greatly improved relationship between the U. S. battalion, then designated as the 1st Battalion (Mechanized), 46th Infantry Regiment (1-46 INF), a battalion of the 2nd Brigade, 1st Armored Division, and the original German partnership battalion had become so improved, and noting the new GDP role of the 104th, the senior command levels of both armies determined that the original partnership would continue. It would do so on a reduced level.

At this point, the U.S. battalion and the 122nd began aggressively developing their inter battalion partnership.   Over the next 18 months the battalions would engage in four platoon level training exchanges at the battalions’ two garrisons, several command post exercises, a two week maneuver deployment to Hohenfels MTA to exercise the GDP corps boundary, and activity at Hohenfels during the U.S. battalion’s readiness training evaluation.

The U.S. battalion’s officers deployed to the 122nd’s garrison in Oberviechtach for a dining in and the battalion commander and XO attended the 122nd’s Erbst (Fall) Ball.  Officers of the 122nd enjoyed a stammtisch (“regular table” officer’s call type of informal social gathering usually consuming multiple mugs of beer) evening at the 1-46 INF’s Erlangen garrison and a major social event of the 2nd Brigade as well as an annual ball of Erlangen City.  Several NCO exchanges added to the program.

As well, the commanders and staff communicated frequently regarding GDP plan reviews and updates.   Included were several events with the 104th and with the German brigade headquarters at not too distant Amberg, an evening performance of a Grosse Zapfenstreich (grand tattoo) being one of these interfaces. 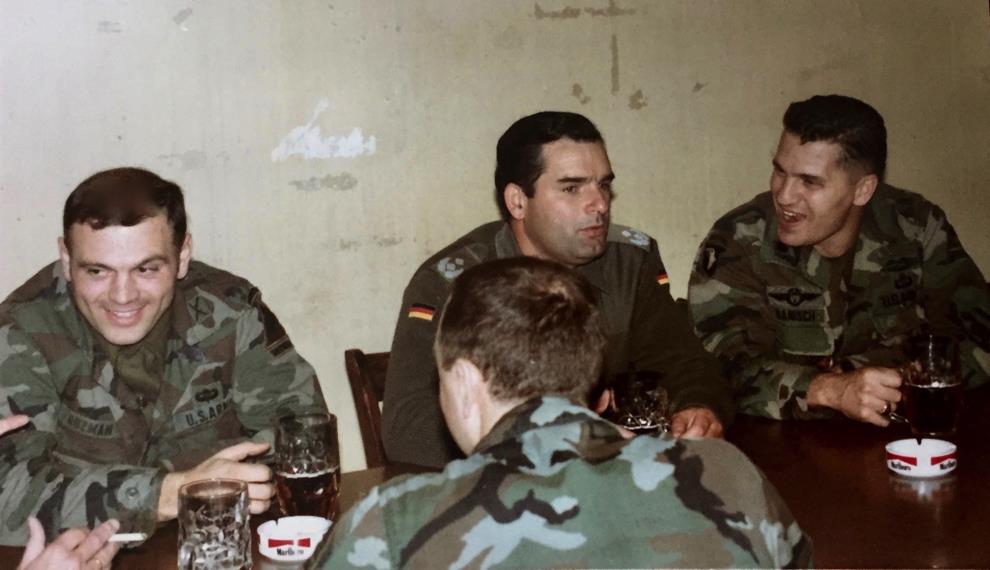 Stammtisch…officers of the Panzergrenadierbataillon 122 and 1st Battalion (Mechanized), 46th Infantry Regiment are enjoying beer and conversation.

The 1-46 INF’s commander was a native born Silesian whose soldier father had died on the Eastern Front during World War II. His mother with her two sons immigrated to Canada. The colonel had enlisted at an early age in the Canadian Army serving with that Army in Germany as a non-commissioned officer. He subsequently immigrated to the United States and enlisted into the U.S. Army rising to non-commissioned officer and obtained an infantry commission through officer candidate school . His native facility with the German language and sense of German culture proved critical to the change in tone for the three battalion partnership.

Additionally, the battalion commander’s personal leadership and emphasis on the partnership created a heightened awareness by the American battalion.  Particularly,  the importance of the relationship and a respect and positive sense of their German comrades was emphasized.

The German commander reciprocated fully.  He was mirror regarding the partnership of his U.S. counterpart.  The approach by the two commanders toward the development of the partnership resulted in the partnership exceeding its goals and effect to the point that a number of beneficial synergies had developed.  One of these was the extended friendships between soldiers and officers, U.S. staff traveling privately to the 122nd’s garrison and other exchanges.  The American particularly gained an appreciation for German combat systems like the new Marder Inantry Fighting Vehicle issued to the Bundeswehr and German methods and techniques. 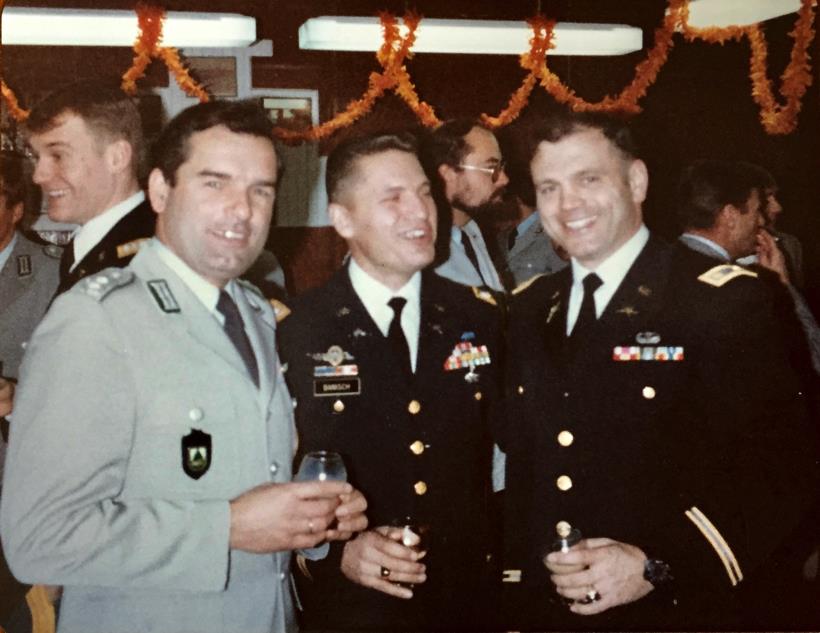 By virtue of the leadership demonstrated by the two colonels a great mutual respect had developed between the personnel of the battalions.  The soldiers and officers had come to know each other not just as soldiers but as human beings and had formed fast friendships both professionally and socially.

Perhaps the final statement to the level of mutual respect between the battalions and their commanders as leaders occurred when the U.S. commander turned over command of the U.S. battalion to his successor.  A company size unit from Panzergrenadierbataillon 122 traveled from its garrison at Oberviechtach to Ferris Barracks in Erlangen.  The German unit formed as a company of the U. S. battalion at the change of command review at the garrison athletic stadium taking position on the ready line then passing in review and rendering present arms to the outgoing U.S. battalion commander as the reviewing officer.   It was a final expression of respect for the departing  U.S. leader of their partner battalion.