Have you ever dreamed of being on top of the world? Many have dreamed but few have stepped up and seized the opportunity to make the dream a reality.

In mid-July 2017 a group of 19 Canadian hikers gathered in the small village of Moshi, Tanzania near the base of Mt Kilimanjaro to commence a mountain hiking expedition with Zara Tanzania Adventures. Mount Kilimanjaro straddles the Tanzania-Kenya border and is the world’s tallest free standing mountain, the highest mountain in Africa and the fourth-most prominent peak in the world rising to a height of 5,895 metres (19,341 feet) above sea level. The group was comprised of an equal number of men and women ranging in age from 25-61. 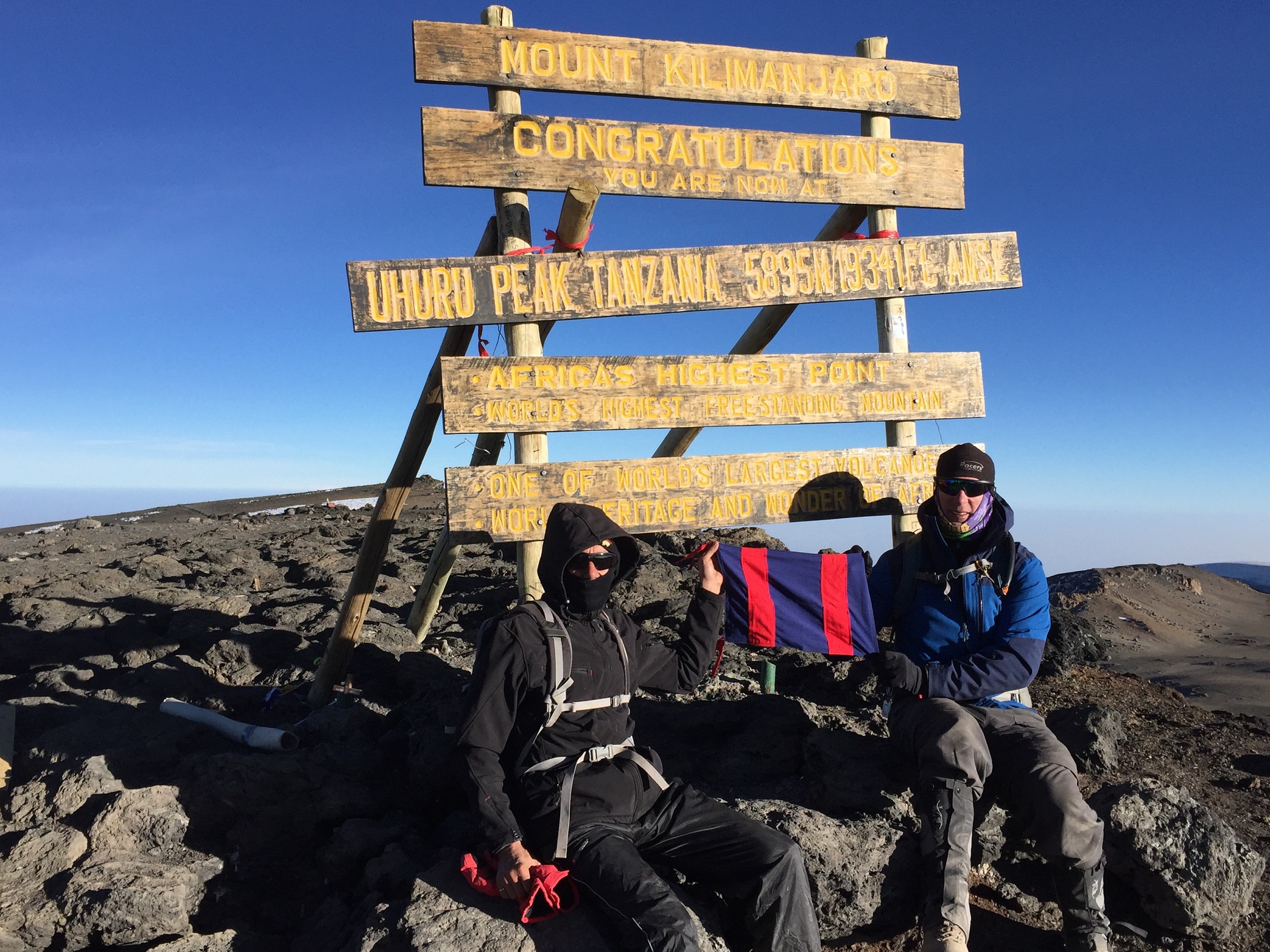 Two of the hikers included in this group were 13591 Ed Batchelor, Major (Retired) and 12454 Major Mark Phillips, both ex-cadets, members of the Canadian Military Engineer (CME) family and the wider Geospatial-Intelligence community.

There are seven different routes that can be navigated to reach the summit, our group utilized the Machame Route which takes hikers to the peak from a southwest direction. It is thought by many to be the most beautiful of the routes with its wild and varied scenic, albeit arguably the steeper of all the routes on Kilimanjaro, rising from tropical forest at the Machame Gate start point at ~1600 metres elevation through heather-moorland and alpine desert to the icy peak above the clouds (four ecosystem climate zones).

Feature photo: Mt Kilimanjaro – Our climb covered a distance of 62 kilometres over seven days with five days (40 kilometres) dedicated to the altitude acclimatization and ascent and two days (22 kilometres) for the descent. On the way up, the daily distances covered on average between 5-10 kilometres and about 1,200 metres in elevation, with the exception being on summit night, where we hiked up for seven hours in the dark in order to summit as the sun came up, waited in line at the top to get a photo beside the iconic sign and then commenced a relentless decent for 12 kilometres which took an expected toll on thighs, knees and feet.

Other than the obvious preparation to boost cardio training, gather up the required clothing and equipment and get ones vaccination shots up to date, the only unknown is physiological psychological reactions to operation at extreme altitude. There is no direct correlation to age, level of fitness, gender or ethnicity. Altitude sickness medication will assist in minimizing the symptoms of headaches (various severities), shortness of breath (think breathing through a straw) and stomach upset leading to vomiting, however, it is how you are able to manage these symptoms that will determine your level of success.

About 35,000 hikers enter the Kilimanjaro National Park annually with the intent of climbing the mountain. Statistics for the overall success rate on average amongst all tour group companies remain elusive but existing literature would suggest it is around 70%. It is not a technical climb, it is just a moderate hike. If you think you are not up to the challenge, think again, as the oldest person to successfully summit was an 88 year old man in late July 2017. The oldest woman to summit was 86 years old.

Guides and porters played an important role in supporting the hiking expedition and were allocated in a 3:1 ratio resulting in an overall supporting group of close to 60 personnel. They looked after everything from setting the pace, to setting up and tearing down the sleeping and eating tents to hauling the tents, tables, chairs, kitchen equipment and food, in addition to all of the hikers’ extra gear for the week. This left the hikers free to enjoy the constantly changing scenery and the task at hand which resulted in getting 17 out of 19 of our group to the top, where it was -15C without the wind chill. 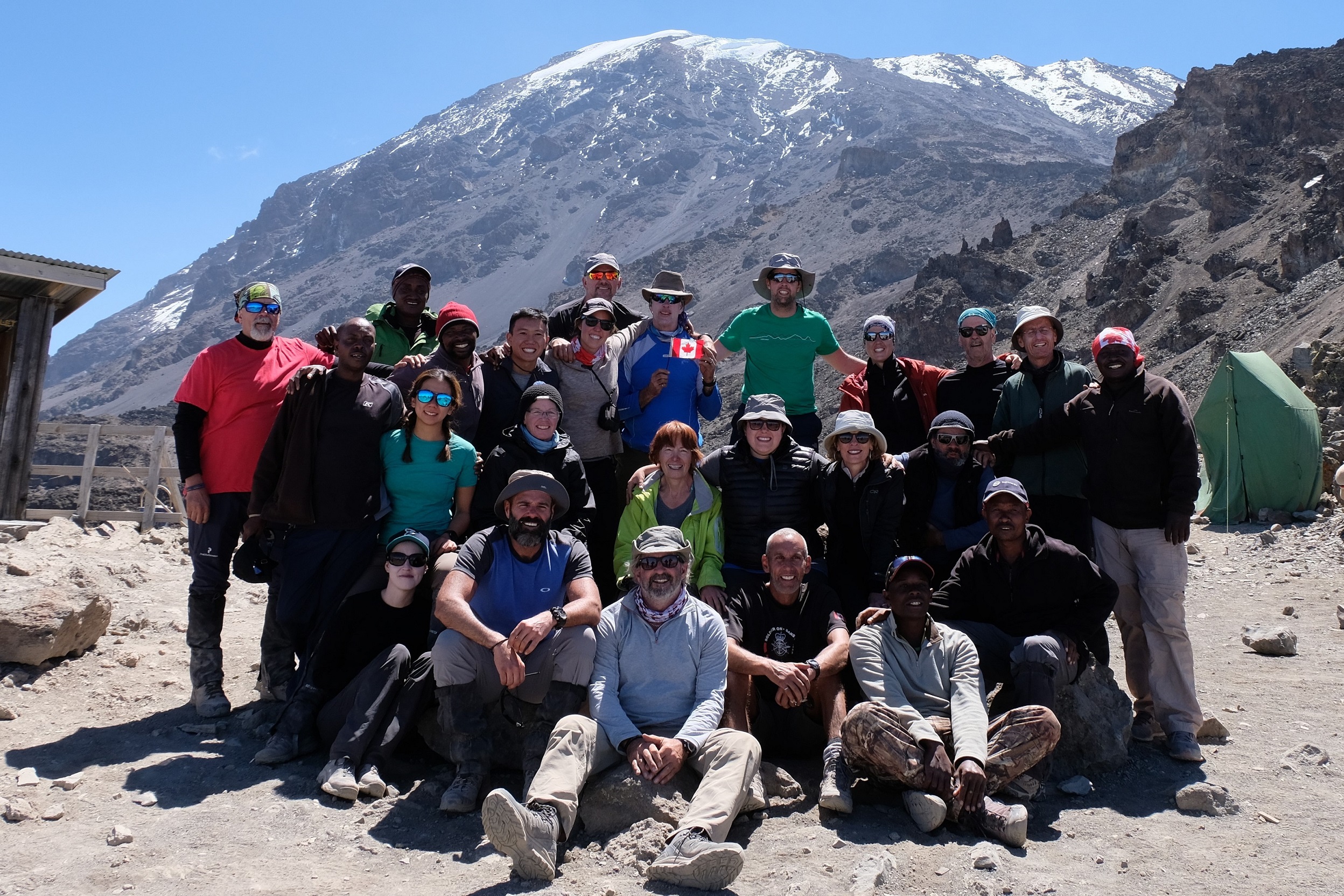 Group of 19 Canadian hikers with the supporting guides

Can’t say enough about the physical stamina of the porters, the first class support and compassion of the guides, and the extreme satisfaction and exhilarating experience of successfully summiting Mount Kilimanjaro with a wonderful group of new found friends and a close military college colleague. What are you waiting for? CHIMO!