Above: “The World Remembers” exhibit debuted at RMC this past Thursday.

“The World Remembers” Exhibit Creator has Family Ties to RMC 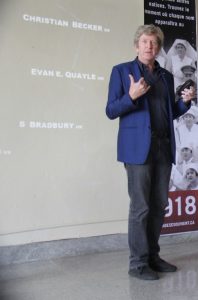 “The World Remembers” exhibit, led by Canadian actor R.H. Thomson, is an iniative aimed at ensuring the names of those who died in the First World War are not forgotten. Each year, starting in late September and ending on Remembrance Day, the names of those killed one hundred years ago during the Great War are displayed on the wall at each exhibit. RMC’s exhibit was dedicated this past Thursday outside Currie Hall. Thomson was on hand for the unveiling.

“This is very personal for me,” he explained. Thomson actually has quite the family connection with RMC, as both 989 J.D. Pemberton and 959 Arthur Stratford are in his family tree. “I used to listen to stories of the Great War and then each year we’d say ‘We remember them.'” He paused. “We remember THEM. Not we remember T-H-E-M. We remember everyone. And I thought, why don’t we remember the individuals? And then I got upset, and then I got a little mad, and this is the end result. It’s really been a passion project.”

The RMC Department of Political Science and Economics Seminar Series will start on Tuesday, September 25th from 11:30 – 12:30 in Girouard 432 with a seminar by Ali Dizboni (Royal Military College) on the subject of “The Nuclear Agreement between the Group of 5 + 1 and Iran.” This 30-minute presentation (followed by a question & answer period), begins the series of lunchtime seminars of the Department of Political Science and Economics. It will take stock of the process of the nuclear agreement between the 5 + 1 group and Iran. Ali Dizboni will present on the factors leading to this agreement and review its evolution since 2015. The seminar will finish with the implications of the US withdrawal. This presentation will reference International Relation theories based on their contextual and argumentative relevance. The presentation will be in French. Q&A will be in both languages. You are welcome to bring your lunch. Desert will be provided. 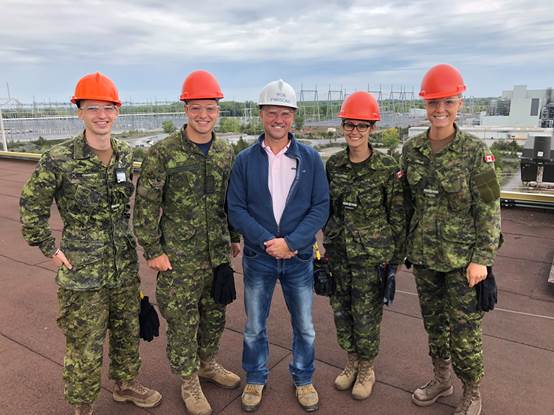 Dr. Geoff Pond, of RMC’s Department of Management and Economics, recently had the opportunity to take his Operations Management class on a tour of the Lennox Generating Station. As he explained, “Students were introduced to the operations of a modern 24-hour industrial-scale power generating station capable of suppling power to up to 8% of Ontario on the turn of a dime. Remarkably, due to technological innovation, this plant has an employee base of only 130 people and can operate through a night-shift with as few as 10 people. I feel very fortunate to teach at RMC where such opportunities are possible due to small class sizes!”

Professional Development for 2nd Years Gives Look at Road Ahead

The Personal Development (PD) training which took place on Wednesday September 19, gave the Division Commanders, the Division Sergeant Majors and the Squadron Commanders an opportunity to speak with the 2nd year students. The purpose of this PD session was to introduce new faces in the Divisions and Squadrons, for both senior officers and new students from CMR. The senior officers were able to give insight to the members of their respective division and squadron, highlighting the expectations for the year amongst the four military pillars. This PD session was very useful for the Second Year Cadets, as the senior officers provided their military experiences, as well as their time at RMC and how it has changed. Along with this, they gave the opportunity for students to reach out and provide improvements for their divisions and squadrons to help improve the college. The Second Year Cadets were given an outline of their year to come and are prepared to challenge the four pillars.

This week the fourth year cadets of the Royal Military College had the pleasure of being briefed by Rear-Admiral Luc Cassivi, the Commander of the Canadian Defence Academy, for the first period of PD training. Admiral Cassivi, an experienced naval officer, had plenty of wisdom to share with the Class of 2019.

The admiral spoke to many different important issues and challenges facing the CAF. He discussed the recruiting process, and how we are seeking to make it more inclusive and he spoke about the importance of diversity in general in the organization.

RMC is one of the leading institutions when it comes to implementing policies that increase diversity in the CAF. At RMC, our outreach programs like ALOY and clubs like AGORA help to introduce diverse people to the College and to ensure that they feel safe and welcome.

Admiral Cassivi concluded his talk by discussing the importance of being “people-centric” leaders. Essentially, everything that we, as future officers, will do in the CAF, is geared towards ensuring that our soldiers are set up for success. After the Commander CDA’s speech, the fourth years participated in squadron-led activities. 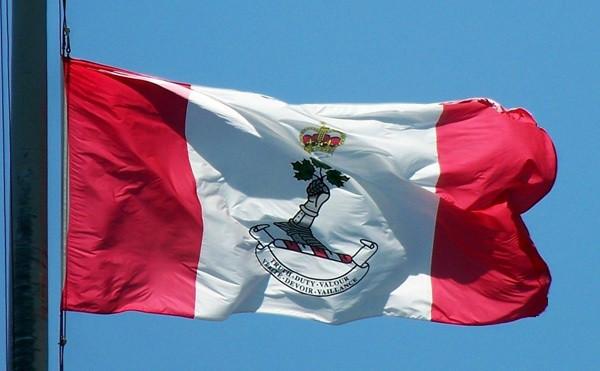 9687 Robert MacLeod, in conversation with other ex-Cadets, is seeking information on the origin of the RMC flag. Ashley Mendes, Assistant Currator of the RMC Museum, can date the flag back to 1920 but, as she explains, the exact origin of the flag is uncertain.

“Although the exact origin of the RMC flag is unknown,” she said, “it dates back at least to the post First World War period. It bears the RMC badge in the centre of a white background and flanked by red on either side. The earliest photographic record of its existence can be dated to 1920. It was originally flown on graduation day and for Reunion Weekend. While flying atop Mackenzie Building in March 1964, the College flag became the inspiration to the design of the Canadian flag. Since 1965, the RMC flag has also been flown from the flagpole in Fort Frederick.”

Anyone with information is asked to contact Robert MacLeod at gonetravelling32@gmail.com.