10,000 Reasons Why the Ottawa Branch Golf Tournament Was a Winner

The organizing committee had a driving ambition to raise a minimum of $10,000 last Friday at the Ottawa Branch Golf tournament, and that is exactly what they did – with a little to spare.

Over 40 teams and 167 registered golfers participated in the very popular and successful 18 hole tournament.

“Thanks to the success of this year’s tournament, we’re able to make a significant contribution to the RMC Club / Foundation which will directly benefit various cadet projects at both RMCC and RMCSJ,”said 11386 Tony MacDougall, chairperson for the 2012 event.

“The Military Families Fund (MFF) will also be given a large donation administered through the Foundation.”

The golfers played on two different 18 hole courses at the Greensmere Golf and Country Club. The Legacy and The Premier. Consequently there were two sets of winners.

On one side, the “Boyle Group”, composed of 8790 Jean Boyle, 20715 Mike Boyle, 8916 Barry Gould and 9352 Vaughan Gunter-Smith won. Although we do not have the exact details of past winners, it is believed that historically the “Boyle Group” in one form or another has won the top prize something like six times over the past 11 years or so.

The other equally winning and impressive team was composed of: 5569 Trayten Jensen, 5708 Tory Payne, 5743 Darwin Marquardt and 5937 Don Poole.

“The amazing success of the Ottawa Branch Golf Tournament is due to the enthusiastic support and the generosity of our tournament partners,” said Tony MacDougall. “The tournament is about having fun and Ex cadets, current cadets, friends & family with our business partners and raising money for great causes. Golf scores are secondary.”

The mood following play at the Club-house tent was one of smiles and lively chatter. Ex cadets from a large number of Classes going back well into the 1950s right up to 2013 were heard exchanging all kinds of colourful yarns.

Congratulations to Tony, his committee members and the 167 golfers.

Following is a perspective of the tournament from a current cadet who was a guest of a key tournament sponsor. 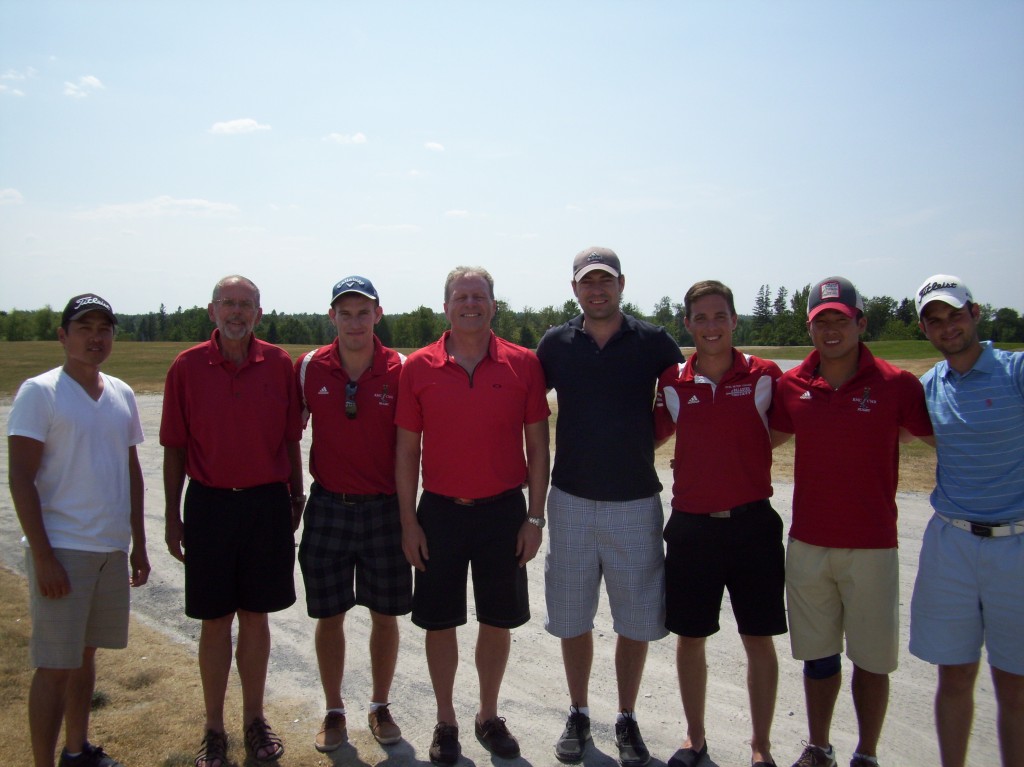 Three Cadets Have an Awesome Time on the Links

Article and Photos by 24647 Paul Lystiuk

Fridays, to most people, are spent locked up in an office or a classroom just waiting for the clock to finally strike the hour of freedom. However, for myself and two other cadets, 25741 Colin Carswell and 25914 Jaemok Lee, we spent our Friday a little differently. We had the privilege to participate in the RMC Club Ottawa Branch annual golf tournament. This is year it was held at the Greensmere Golf and Country Club in Carp, Ont., which is just outside of Ottawa. The day could not have been better with the sun shining all day long, and the wind classified as a gentle breeze, just enough to keep the bugs away. There were 167 registered golfers this year that came out to play in the scramble format tournament.

One of the major sponsors for the event was Canso Investment Counsel. 11623 John Carswell, who is the president of this company, was generous enough to sponsor two foursomes in the tournament. His son, and current cadet, Colin Carswell and Jaemok Lee were in one of the groups along with Colonel (ret’d) 6776 Tim Sparling and MGen (ret’d) 11669 Joe Hincke. The other foursome had three employees of Canso; Harold Won, Jason Bell and ex-cadet 22350 Nick Desjardins with myself as the fourth. Both teams finished with very respectable showings with the first group finishing with a one-under par 71 and the second group with a 12-under 60. The winning group of the tournament was “The Boyles” (who, I am told, have won it for the 6th or 7th year in a row) with a 14-under 58.

The tournament organizer Tony MacDougall, would like to thank all the sponsors and participants of the tournament. A special thank you goes out to the major sponsors Canso Investment Counsel, 2Keys Security Solutions and the RBC Foundation. At the time I spoke with Mr. MacDougall I was told that the amount raised was near $10000, but I wouldn’t be surprised if that number was exceeded as they were still adding up totals from the auction items. All in all, it was a spectacular way to spend a Friday with awesome company. 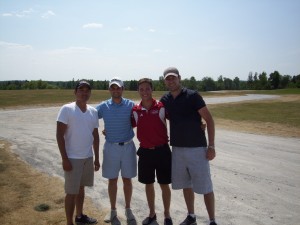