“I wanted to wear the red uniform” 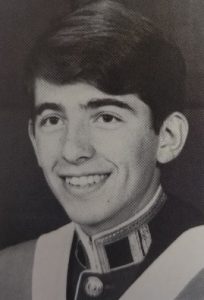 “I was always fascinated by all things military,” 10263 Don Lovell (RRMC/RMC 1974) said. “Both of my Grandfathers had served in the First War, one in the Infantry and the other a Sapper. My father and two of his brothers served in the Air Force during the Second War. Growing up in SW Ontario our family visited many of the historic forts including Fort Henry. At the age of 9, after seeing the Fort Henry Guard I decided that I wanted to wear the red uniform. I was told that the cadets of the Royal Military College wore scarlet uniforms. From that point on I set my sights on attending RMC.”

Don’s goal of attending RMC took a slight detour, however, when he noticed a poster for Royal Roads Military College while at the Recruiting Centre. “In Grade 13 at Westminster High School, in London, Ontario three of us applied to ROTP Military College,” he explained. “During one of my trips to the Recruiting Centre I saw a poster with a castle, mountains and water. When I was told that photo was Royal Roads I selected RRMC as my first choice. My two other buddies were not so motivated and thus it was that 10150 Al Mennie and 10174 Bill Sparling went directly to RMC.”

“Arriving at Royal Roads in August 1970, I found that it was everything the scenic photo had promised. My service in the 3rd Battalion Royal Canadian Regiment militia had prepared me for the recruit term. My academic life at RRMC was made easier having taken GR 13 Calculus and Algebra. Math and Engineering Graphics were my best subjects. I remain in contact with 2982 Eric Chappell who taught Engineering as well as the best math prof ever, Dr. Peter Smart.”

Reflecting on his time at Roads, Don said, “I was 19 starting First Year and was surprised by how ‘young’ some of my classmates were. 10309 Norm Shaw from Alberta was only 16. What Norm lacked in years was not evident academically or athletically as he excelled in both. My sports ability was not remarkable. I had won a provincial championship in archery but that sport was not offered. I had played hockey for years and was glad to play goal for the College team. A significant memory was an away trip to Trail to play against the Junior B Trail Smoke Eaters. When our return flight 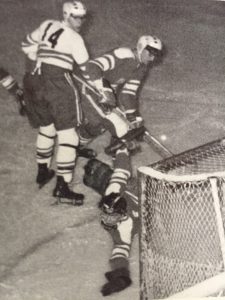 1972 Senior versus Junior hockey game: Junior Cadet #14 10696 Bruce Hunter’s shot is stopped by Lovell while Senior Cadet 10254 Harv Knapp keeps Hunter out of the crease. Seniors won the game 10 to 3.

failed to show up at the Castlegar Airport we learned that our Hercules 106 was cancelled as the Air Force was busy getting troops to Quebec. (It was October 1970.) Another memory was when we played against the Surrey Stampeders the announcer introduced our team and made note of fellow Fraser Flight member 10293 Bob Metro Prystai whose uncle had played for the Chicago Blackhawks and the Detroit Red Wings. Defencemen 10234 Dennis Fodor and 10204 Barry Bradshaw (a master of the classic “hip” check) and star forwards 10340 Rick Wing and 10194 Jim Alkins went on to play for the RMC Redmen in 3rd and 4th year.”

“A major plus of playing hockey at Roads was that I met a beautiful young blonde at a hockey party organized by the Team Staff Officer, LCol G.J.Whitten. Charmaine Griston was in Grade 11 at Oak Bay High School and by the end of the term she attended the May Ball as my date.”

Notable leaders at Roads which readily come to mind for Don are RCNC 199 Captain (N) RCK Peers, “the Commandant who knew every cadet, where they hailed from and even their hat size,” and Senior Cadets 9765 Norm Dunker and 9741 Ken Beselt who lead by example. On the Academic side Professor of English Dr. G. Morgan, is remembered for his wisdom “The mark of a free mind is the ability to make distinctions” and Dr. William Rodney, DFC & Bar, official historian of the great Canadian adventurer Joe Boyle, King of the Klondike. 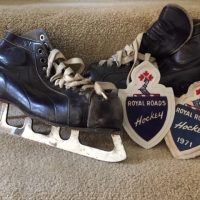 Don’s goal of continuing to play hockey for the College after making the move to Kingston was not to be. “At Roads I had played Second Team rugby on the line as wing so after not making the RMC hockey team in 3rd year I continued with rugby. In fourth year I again tried out for hockey but did not make the cut. Two months into the season Coach Tom Walton asked me to take on the spare Goal role but after a couple weeks of practices I realized that I could not play hockey and complete my Honours History Thesis.”

“After graduation in 1974 and completion of Infantry Phase Training in Gagetown I proceeded to Victoria to marry Charmaine,” Don said. “Our 1974 graduating class included 9 infantry officers. Three of us went to the Patricia’s. 10230 Phil Eivemark went to 2nd BN Winnipeg and 10337 Bill Wild to the 3rd BN in Victoria. I was posted to the 1st Battalion, Princess Patricia’s Canadian Light Infantry, Calgary. The first employment of any Subaltern is the best role they will ever have and that is as a Platoon Commander. We were so short of Lieutenants that I was the only Pl Comd in B Coy that was an officer. Interestingly the Coy 2IC was 9770 Frank Forte who had been the CWC at RRMC in 1971. A memorable highlight was being the Intelligence Officer for then 4905 LCol Kent Foster during OP Games Canada 1974. In 1977, I was promoted Captain and served as Acting OC A Company for then LCol Lewis Mackenzie.

In 1980, Don left the CF to pursue a Master of Architecture degree at the University of Manitoba. While attending UM, he served with the Royal Winnipeg Rifles. On graduation he worked one year as an Architect in DCOMS Mile, Air Command HQ under 3542 Bill Johnston.

Work as an Architect took their family to where there was construction, 1984-1986 in Nanaimo where I established my own firm. Next came four years in Yellowknife, NWT, where Don was involved with the design and construction of K-12 schools in some 10 hamlets, settlements and towns from Inuvik to Cape Dorset. In 1990 they moved to Victoria where he worked at the University of Victoria as Manager Design and Campus Planning for 17 years. He joined the BC government in 2007 as part of a team to evaluate seismic retrofitting of BC schools.

“Charmaine and I have four children all born in different cities, Gillian (Winnipeg), Hilary (Nanaimo), Claire (Yellowknife) and Joshua (Victoria). We are now the proud Grandparents of Alivia, Gemma, Kylan and Rosamund.”

“When I retired as an Architect in 2015, I was invited by the Architectural Institute of BC to speak at the Induction Ceremony for new Architects. In an interesting coincidence the response to my ‘Charge to the Inductees’ was given by Jennifer Cutbill who is the daughter of 10220 John Cutbill a classmate from Royal Roads 1970-72.”

“In order to stay in touch with ex-Cadets I have been involved with the ex-Cadet club since leaving the Regular Force,” Don said. “I have served as secretary treasurer of the Manitoba Branch, twice as president and now treasurer of the Vancouver Island Ex-cadet Club as well as a term on the Parent Club Executive. I am also a member of the military heritage committee at Royal Roads University. I have attended every five year class reunion at RMC and have helped to organize a number of Royal Roads Class of 1970 -72 Homecomings at RRU. This September, Charmaine and I are planning to attend our 45th reunion to enter the Old Brigade.”

“Having served with the Canadian Scottish Regiment I was honoured to be asked to organize the unveiling and dedication of the BC Afghanistan Memorial in Victoria on 30 September 2017. The success of the event was entirely owing to an outstanding committee which included fellow classmate 10218 Paul Crober, Hon LCol C Scot R.” 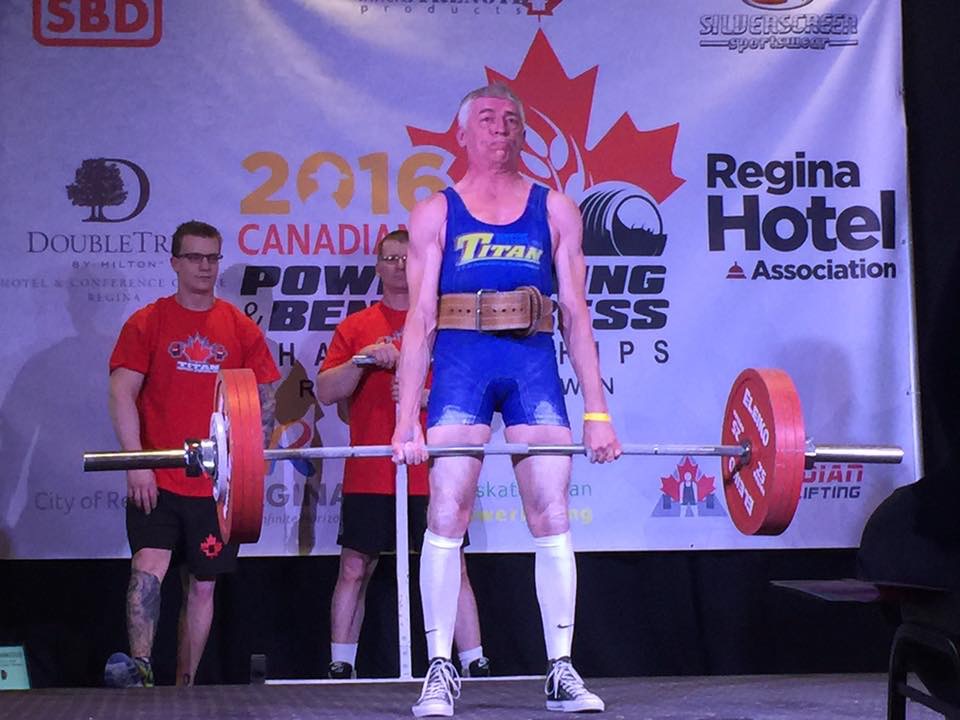 Finally, he said, “Having learned to run at Roads I continued to enjoy running and completed 24 marathons until an injury in 2009 forced me to switch to weightlifting. Powerlifting has become my passion and I have won my age and weight division at the Nationals since 2012 along the way setting some National records as well as holding the 66 KG Masters equipped records for the North American Powerlifting Federation.”

On March 8, 2019 Don will be trying to defend his title at the Nationals in Ottawa.