Ex-Cadet Not Slowing Down Anytime Soon 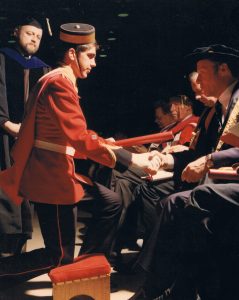 For 10973 John McManus (RMC 1976), the idea of attending military college came naturally. As the Toronto, Ontario, native recalled, “I was motivated in the 70’s seeing the military aircraft flying over my house towards Downsview Air Force Base, especially the newly purchased CF-5’s, and the thought that I could combine flying and engineering was what sealed the deal for me.” He included RMC as one of his post-secondary options to study engineering and was accepted. He entered RMC 15 August 1972.

McManus spent all four of his years at the College on the Intercollegiate Waterpolo Team and, as he remembers, that came naturally, too. “While we were undergoing recruit camp and sitting at attention during lunch meal announcements, Capt Ken MacDonald (the coach) came into Yeo Hall and explained that the team would be holding tryouts during the last week of August and the first week of September. He explained that six team members had graduated in 1972 so there would be opportunities for recruits to make the team.” As he went on, “I had never picked up a water polo ball in my life but I swam all four years for my high school swim team. It was very hot in Kingston at that time and we had recruit sports like soccer and rugby which including running out near Navy Bay. I thought to myself that I would much rather be in the cool pool water in Fort Haldimand for two weeks!”

McManus was aware of his inexperience and he didn’t actually expect to make the team. “During the evaluation period, I learned the basics of shooting, blocking shots, and the RMC team offensive strategies. I did win most of the swim related activities and could get my body out of the water better than most on defence. Still, it seemed to me that everyone else was much more experienced with the ball, especially the guys from CMR and RRMC with years of intercollegiate experience.” To his surprise, he made the cut. “I went up to Coach MacDonald to thank him for selecting me and I told him that I was worried that my ball handling and shooting were not as good as others that were trying out. He said, ‘I can teach a swimmer to handle the ball, but I can’t teach a ball handler to swim fast.’”

John McManus went on to captain the team in the 1975-1976 season and in that role notched several proud moments for RMC. One in particular still stands out for him. “Our first tournament that year was in London, Ontario, hosted by the University of Western Ontario. A couple of days before we were to depart, Coach informed me that he could not go on the road trip and that I would have to look after the team.” He went on, “We were scheduled to play four games over the weekend and we won our first game against the University of Guelph on Friday evening. On Saturday morning we were scheduled to play McMaster University who had not lost a waterpolo game against an OUAA opponent in more than ten years. They had three of the players on the 1976 Canadian Olympic Team and a very experienced coach who asked my permission to play even though he was no longer a student. Since it was an exhibition game and we were going to lose anyway I said sure.”

As things turned out, that was not a bad decision. “After the first quarter, McMaster was up by about five goals but in the second quarter their coach was being very closely guarded by our player 11306 Pierre Rivard. He got frustrated and kicked Rivard but his leg came out of the water and hit Pierre in the head. The ref kicked him out for brutality and in waterpolo no replacement is allowed. That gave us an extra player, which is a huge advantage, and we ended up winning 10-9 in McMaster’s first OUAA lose in more than a decade.”

Despite the good memories, McManus had his share of challenges while at RMC as well. “My biggest challenge was Second Year engineering,” he said. “First Year was a breeze because the Calculus, Physics, and Chemistry were all repeats of our Ontario Grade 13. In Second Year my eyes were always bloodshot from water polo or swimming practice and I did not study as much as was required as all the technical concepts were new to me. I think they gave me a 50 in Differential Equations, but told me that I was in Third Year Mech Eng ‘on probation.’”

McManus has fond memories of those who helped him through his challenges, including Coach MacDonald and some “wonderful Mech Eng” profs, Drs. Pike, Bussierre, Leonard, Moffat, and Ferguson among others.

He graduated 1 June 1976, one hundred years to the day the College opened. “Following grad I underwent Air Navigation Training in Winnipeg and spent my career flying the Sea King on both coasts. I served 36 years in the Regular Force and six years in the Reserve Force.”

“One of the best jobs I had after graduation was my first one,” he remembered, “working at the 1976 Montreal Olympics at the water polo venue and seeing the guys from McMaster there.” As McManus continued, “There were also six Sea King flying tours including commanding HOTEF as a Major, 443 Sqn as a LCol, and Maritime Air Component (Pacific) as a Colonel. My last position was the VANOC 2010 Air Component D/Comd and Chief of Staff providing air support to the RCMP who were the lead security agency for the Vancouver/Whistler Olympics and Para-Olympics.”

“I served in the Regular Force for 36 years, and then 6 more years in the Reserves,” he said looking back, “so now I choose to just enjoy life instead of working any more. My retirement from the military allowed me to concentrate on swimming, biking, and running without the constraints of being in the work world. I coach the NavyMasters swimmers at the Esquimalt Base and also coach a track run group. My big project right now is renovating a waterfront home on Saanich Inlet north of Victoria and that task is starting to cut into my triathlon training time.” 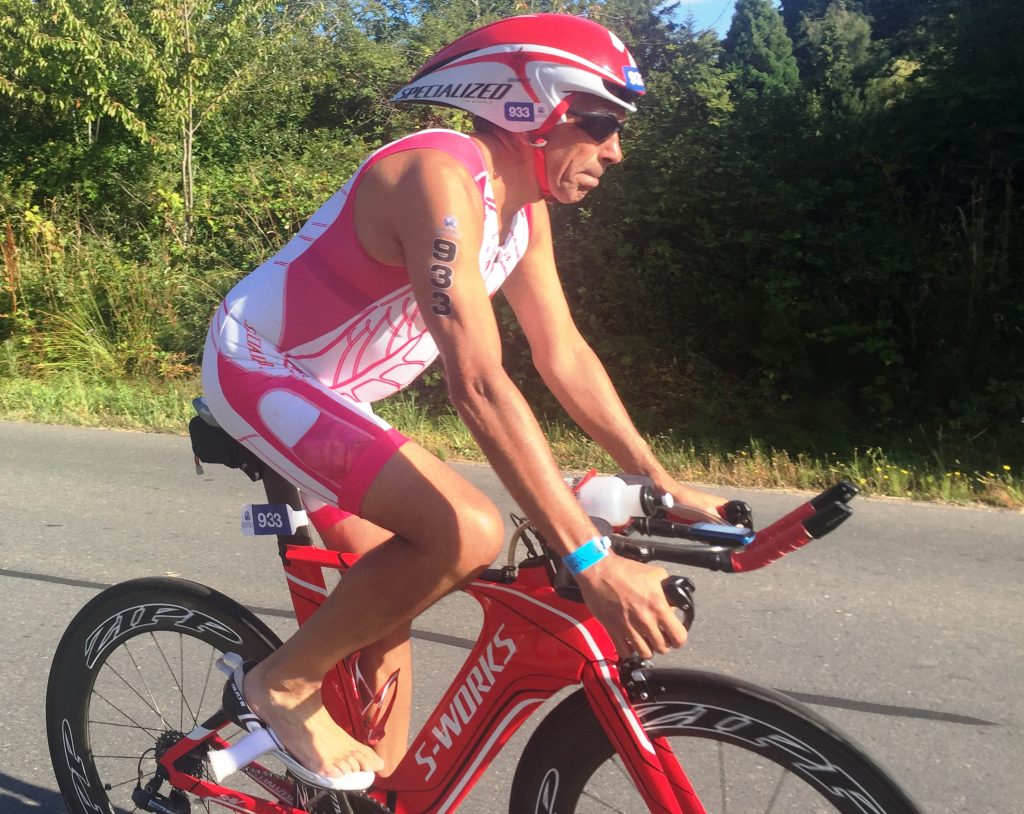 As those who know him are well aware, McManus is an avid triathlete. “I learned about triathlon during a posting to California when the sport first started in the early 1980s,” he recalled. “Several of my classmates at the Naval Postgraduate School for training for the Wildflower Triathlon in Monterey County and they told me about it at the pool. It seemed like a fun concept to me!” He went on, “At my first race in 1985, I got to swim and compete against Scott Tinley who went on to win the World Championships in Kona in 1988.”

Six years later, however, at the Canadian Forces Championships in 1991 at the K-Town Tri in Kingston, he explained, “I decided to retire from the sport when I fell, ‘ran out of gas’ in the run, and dropped to 6th place in the military competition.” Life after that point also made it difficult for McManus to maintain a proper training regimen. “My two kids were born in 1990 and 1991, and with a busy military career, many moves and three command tours, I was able to keep swimming but not running or biking.”

He made his return to the sport more than a decade later and he has had several proud accomplishments since then. “When the kids finished high school in 2007, I got back in the sport and in 2008 I won my age group at the Victoria Half Iron race,” he said. Another proud moment came in 2015. As McManus explained, “During my time in California I had always wanted to complete the ‘Escape from Alcatraz’ (EFA) Tri as it is a swimmers race due to the challenging currents, swells, and winds. I signed up every year from 2010 to 2015 and was able to improve my Age Group ranking from 8th to 4th in difficult international fields. My highest level triathlon victory was at the 2013 race where I won the Male 55-59 Age Group.” As he went on, “In 2015 it was the 35th anniversary of the EFA race and they had invited back all the winners. One of the previous champions was Scott Tinley, and I got to race him thirty years after we first meat Wildflower 1985. He again beat me in the swim, but this time I beat him on the bike and stayed ahead on the run for what was a very significant victory for me.”

Now that he’s back in the game, John McManus shows no signs of slowing down. “Every year I sign up for a variety of races ranging from the standard Olympic Distance to an annual Ironman. I still have not won my age group at an Ironman yet, so I have not qualified for Kona, but I have finished just over twelve hours in three Ironman races!”