I was born and grew up in Portage la Prairie. That Manitoba city of 12,000 had an air force connection due to the nearby base but I ended up in Army Cadets because I heard it was a stepping stone into the militia, where you could actually get paid. And so it was! When I finished high school, I was a sergeant in the artillery: gun detachment commander and arty tech. I didn’t actually graduate from high school. I took the last month off to go on call-out with the Regular Force artillery. High school was so glad to see me go so they gave me passing grades to ensure I wouldn’t come back.

Somewhere in that process, I picked up a military college pamphlet featuring the photo of a handsome cadet with a sword. That looked like fun so I applied to the travelling recruiter from Winnipeg. By that time, I had also developed an interest in TV repair but was devastated to find out that RMC didn’t offer TV repair among its programs. With some misgivings, I signed up for electrical engineering instead, although it seemed to be a poor substitute. And when I declared that I wanted to play with radios in the Army, they said, “That’s Logistics. Sign here!” 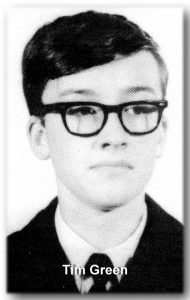 I ended up at Royal Roads in August 1973 with a bunch of other shell-shocked young men. For some reason, they didn’t give me a sword on the first day. My militia experience helped me not to take the silly stuff too seriously but I did see my share of trouble. On one Sunday morning parade when I was in the band, I tried to hide that I had forgotten to shave by pressing my glockenspiel up to my face and peering out at the inspecting officer between the bars. The ever-vigilant Capt(N) RCK Peers noticed my prickly face. And in one skylark gone bad (something to do with a warm can of pop lowered out a window on parachute cord), I almost severed somebody’s finger. Despite the lurid testimony of the witness at my charge parade about the spray of blood on the ceiling, they didn’t throw me out. I progressed to basic officer training at Borden and on to second year.

When I look back at it now, the whole Roads experience was a real privilege. The excellent staff, the small group of cadets, the individual attention, and the breathtaking college grounds were things that my eventual friends from RMC or CMR could never understand. My daughter who graduated from Royal Roads University many years later referred to it as “Hogwarts.” Indeed, it was really something magical, but by then, the parade square had turned into a parking lot.

RMC in third year was a bit of a shock. On my first night in Ft. Lasalle, I lay in my bed (the only furniture in the room) and stared up at the peeling paint and the insulation sagging off the steam pipes. It was like a cheap hotel. I had just been shouted at by some self-important fourth year. Quite a change from the garden luxury of Roads where I had been a “bar man.” I felt like crying.

Things picked up quickly though as I connected with buds from Roads and summer training (I had managed to get out of Logistics and into CELE), and I made a host of new friends. The person who really helped turn RMC into a positive experience was LCdr EE (Ted) Davie, our 2 Sqn squad boss for the two years I was there. I got to know him better when I was in fourth year as the 3-bar Cadet Squadron Adjutant. He treated us like mature adults, which was probably generous on his part.

I graduated in 1977 with a degree in Elec Eng, an interest in strange new things called “microcomputers,” and a functional command of French. After some more time at the Sigs School up the hill in Kingston, Lt. Green went off to Valcartier as a troop commander in the brigade signal squadron there. 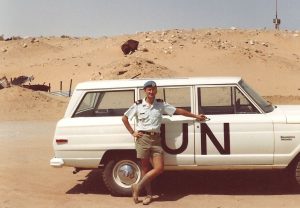 There’s nothing that sharpens up one’s French like going off to court in Quebec City to explain to some humourless judge why Signaller Tremblay really needs his driver’s licence for work purposes despite his previous indiscretions with alcohol. A detour to Egypt as sig troop commander was interesting because I had always wanted to be an archaeologist almost as much as I wanted to be a TV repair man.

The two-year period I spent as signal officer with the artillery regiment in Valcartier was one of my best jobs. I was a captain and we were preparing to go to Cyprus. We had a bunch of good, well-motivated people and the Cyprus rotation was a lot of fun. Back in Canada, the artillery routine was a lot of fun too, because I knew all about the technical details of artillery from my days in the militia. Mais oui, tout en français!

Then a flurry of other exciting things: student at Carleton University for an MEng, project manager of space systems at NDHQ; student at Army staff school in Kingston; senior staff officer at Army HQ in St. Hubert introducing computers to the Army; student for a year at the US Army Command and General Staff College in Leavenworth, KS; and project manager in NDHQ again, this time replacing all the radios in the Army.

Out of the blue in mid-year, I was told they needed a G6 in Land Force Western Area HQ in Edmonton. What? That wasn’t even on the radar. But the COS in Edmonton knew me from my artillery days and I was the only one who could do the job. Well, OK. I stayed as G6 in Edmonton for six and half years, some kind of record, I’m sure. 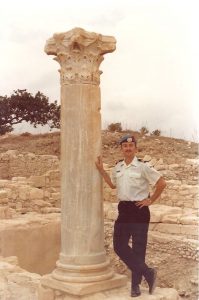 Eventually, it was time for me to leave Edmonton. As a senior major, I was disappointed that the official career planning process couldn’t come up with anything better than “back to Ottawa and we’ll find you something.” I had all sorts of alternate suggestions, none of which seemed to work. Popular wisdom was you quit when it wasn’t fun any more. I realized that going back to Ottawa again for some random job wasn’t going to be fun. I retired from the Army in mid-1999 after 3 years in the militia and 26 years in the Regular Force.

When I left the Army, I decided I would only do things that were fun. I’ve kept to that ever since. The secret is averaging the fun out over a long enough period of time. Some days won’t be fun at all, but it’s got to be fun on average.

Out on the street, it wasn’t as easy to find a lucrative sweetheart job as I thought it was going to be. I did some consulting work, helping businesses with computers and Internet. I turned a hobby into a project management contract with a railway. I worked as manager for Dell Canada. I did some technical editing and even some French/English interpreting. It turned out that lots of things I had learned in the Army were useful outside but it wasn’t always obvious how to match them.

In 2010, I moved to Whitehorse to take a job as IT project manager with the Government of Yukon: small (compared to NDHQ) organization, great working conditions, great quality of life. And yes, the weather is much more comfortable than many places south of 60. Like outdoors activities? Move north! I wish I’d figured that out years ago. I’m on the council of Engineers Yukon. I teach school kids about science and engineering. I walk 4000 km/year. I design Internet of Things things. And I just started a podcast series: https://timmit.ca/podcasts/ .

The Internet makes staying in touch with old friends a lot easier. I’m the webmaster of the RMC Class of 77 website and help pull things together for our reunions every five years. We even had a Roads Recruit Class of 73 reunion a few years back… another one soon? I find that it’s not so much the college grounds that draw me. It’s meeting with my college friends that’s much more important, and we pick up right where we left off.

And it’s all still fun, or I wouldn’t be doing it!