Above: 13687 Jim Ryan in his wheelchair with his wife Isabelle in front of their accessible van.

Injured Classmate Helped by Class of 82 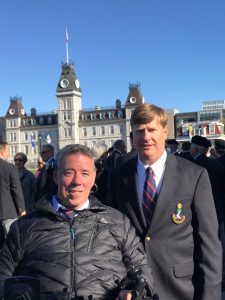 In March 2016, 13687 Jim Ryan (RMC 1982) was vacationing in Maui, HI with his wife Isabelle. They were cooling off in the ocean and were slowly leaving the water when Jim was hit by a wave. His head was driven into the sand and he was instantly paralyzed. He drowned and was resuscitated on the beach. After four days in Hawaii he was flown home on a medevac flight to Vancouver. Jim then spent four months at Vancouver General Hospital followed by a 5 ½ month rehabilitation at the GF Strong Rehabilitation Centre. He returned home in January 2017.

Jim’s injury is at the C4 level of his spine which means he has lost the use of 26 of 30 vertebrae. He is a complete quadriplegic and spends his days in a wheelchair. Because of this is wheelchair must be quite high tech. Jim doesn’t move so the wheelchair must have features such as tilt the whole wheelchair, recline the backrest and raised the feet. This helps Jim’s circulation and skin health.

The cost of an item like this is extremely prohibitive. To have the features that Jim needs would cost more than most cars that people buy on a normal basis; however, Jim’s class stepped forward to help.

When the Class of 82 heard about Jim’s injury they all stepped forward to assist in purchasing Jim’s wheelchair. Led by Class Secretary 13750 Tim Justice, they quickly raised almost all the necessary funds. (It’s also important to note that Tim’s father was in the Class of 1956 along with Jim’s father-in-law. When the Class of 1956 was approached by Tim they were very genereous in their donations, too!)

Jim cannot say enough about how his class reached through time and distance to help him when he needed it most. He has continuously tried to connect with his buds from RMC throughout the years and now he knows that the deep friendships that were forged back between 1978 and 1982 are more than just thoughts and words. He will forever be indebted to his classmates. 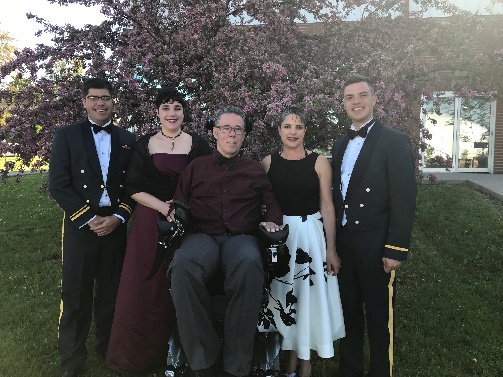