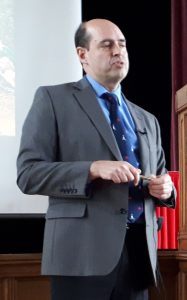 On Friday afternoon, Dr. Coombs’ history of peacekeeping operations class had the pleasure of listening to a presentation by retired LCol (Ret’d) Bryan Bailey on his experience deploying on the United Nations Organization Stabilization Mission in the Democratic Republic of the Congo (MONUSCO).

He began the presentation by giving the class a detailed background to conflict that precipitated the UN’s involvement. This included an explanation of the regional situation and the development of the conflict since the first UN mission began (ONUC in the 1960s). He then spoke to the broader structure of the mission, including the civilian elements, and the organization of the international military force that was deployed.

One of the major takeaways of his presentation was the situation was complex and involved many different actors. The mission had to contend with both foreign and domestic armed fighting groups and to further the disarmament, demobilization and reintegration of rogue warriors. As the former infanteer pointed out, this was not an easy task.

Mr. Bailey also spoke to several of the challenges that the contingent faced on the mission and provided a detailed analysis of the lessons learned in the Congo from when he deployed in 2008. Of course, the complexity of the mission was one of the most pressing issues, and brought with it challenges relating to the mission mandate and the Rules of Engagement (ROEs).

Other notable challenges included the lack of robust logistical support and public opposition to the mission. Moreover, Mr. Bailey noted that the UN mission had a limited intelligence gathering capacity, which hindered their ability to plan operations.

The presentation ended with an update on the Congo’s current situation, which still needs to be improved. After his presentation, the retired PPCLI officer took a few questions from the audience. Overall, Mr. Bailey’s presentation was informative and left the cadets with a better perspective of UN peacekeeping.