Ex-Cadet Can’t Seem to Stay Away 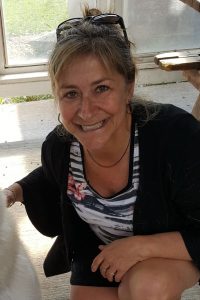 14419 Johanne Durand came to RMC in 1980 motivated by the challenge of being in the first class of women to attend the College. She recalls, “My brother, 12944 André Durand, was at CMR St-Jean at the time and as I was graduating high school in 1978 he told me that the military colleges would be accepting women soon. That’s where I got the idea.”

When she arrived at RMC she found more than enough challenges to suit her. “At first,” Durand said, “it was the language barrier as I was not bilingual. Then it was time management. I took engineering and not being bilingual I only had one spare a week! I also joined the high box team (vaulting team). We used to travel to high schools to promote RMC. After these visits I would be very late in my academic work.”

It was the people at the College that made the experience what it was for her. “The best staff I got to know and appreciate was my squadron commander, Walter Natynczyk, who later became the CDS. He was an outstanding person. He was friendly, knowledgeable, and empathetic, and he remembered you. He was an inspiring man.”

Following graduation, the Montréal-Nord, Québec, native went to Borden for her AERE training and was then posted to NDHQ in Ottawa for five years and finally to AIRCOM in Winnipeg for two years. “I got out in 1992,” she said, “and went to Kingston where my husband did his Master’s degree.”

After getting out she looked after their three boys for nine years before starting her public servant career at RMC in 2001. She’s been there ever since and as such gets to see a lot of what goes on at the College. Currently she is the Administration Officer to the Chief of Staff. Her perspective at the College also means that she does, occasionally, see things which can be a cause for concern. “What concerns me most,” she said, “is that we have to keep convincing higher levels of government that RMC is a great institution. They just don’t seem to get it! The second thing is the current administration of the College. It is the backbone of the institution and in my view it is tired and in need of ‘renovation.’ After many roadblocks such as the WFA, budget cuts, etc., it needs new resources, attention, and TLC.”

At the same time, there are many positive elements to the College right now. As she stressed, “I see many people dedicated to making RMC a great place and supporting and helping the Officer Cadets. Two such organizations are the RMC Club and the RMC Foundation. The staff there, too, is outstanding. They really work hard and contribute a great deal to the success of RMC.”