Articles and Photos from various sources

The month of November was a very important one for Alithya. Not only has the company teamed up with Ranzal and Fullscope to become a North American strategy and digital technology leader, but Alithya has also made its official debut on the NASDAQ and the Toronto Stock Exchange (TSX).
CEO Paul Raymond and members of the management team rang the famous NASDAQ bell. These various events were covered by both English and French media. Below, you will find a selection of media coverage. 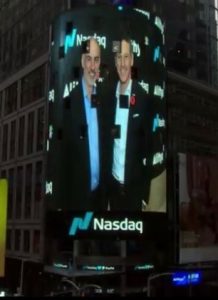 On Nov 2nd 2018, 15435 Paul Raymond (CMR/RMC ’87), Alithya CEO and 15819 Bob (Robert) Lamarre (CMR/RMC ’87), Alithya CIO, both from the Class of 87, were in Times Square in NYC to ring the closing bell of the Nasdaq Stock exchange. Alithya was the 1st Canadian Tech IPO in 2 years and the only Quebec Based Tech services company on Nasdaq.

Paul and Bob both joined the company to help lead the rapid growth strategy to build a Canadian leader in strategy and digital technology transformation. Today, Alithya has 2,000 professionals in Canada, the US, and Europe. The company’s integrated offering positions us as a leading digital technology partner, highly skilled in designing innovative and efficient digital solutions for business challenges. Alithya has been in business for over 25 years, and have advised, guided and assisted numerous Alithya clients in their pursuit of innovation and excellence. Alithya’s services are predominantly in: Strategic consulting, Microsoft solutions (ERP, CRM, Business Analytics and Digital Solutions) implementation, Oracle solutions (EPM, ERP Cloud, EBS and Analytics) implementation as well as custom, agile, solutions. The company is active in strategic projects across Banking, Investment and Insurance, Energy, Manufacturing, Retail and Distribution, Telecommunications, Transportation, Professional services, Healthcare and the Government sectors.

Alithya trades on both the Toronto and Nasdaq exchanges under the symbol ALYA.

From The Globe and Mail:

By Jeffrey Jones (Article may be found online here)

A tech services consulting company that has roots in one of Canada’s most successful players in the field aims to expand quickly through acquisitions now that it’s gone public.

Alithya Group Inc. shares surged by nearly a third on Friday, their first day of trade on the Toronto Stock Exchange and Nasdaq after completing a reverse takeover of Massachusetts-based Edgewater Technology Inc. The company also completed a $53-million private placement in a deal led by Desjardins Capital Markets.

Alithya is following the playbook of CGI Group Inc., one of the leaders in the field of providing companies, government departments and other institutions with the systems they need for accounting, payroll, policy administration and other business processes.

Paul Raymond, chief executive officer of Montreal-based Alithya, had been an executive at CGI for 17 years and had spent much of that time running its U.S. Northeast operations in Boston. Two other senior Alithya executives are also CGI alumni.

“We set out on an accelerated growth plan seven years ago, taking us from about a $30-million company to a $300-million company today,” Mr. Raymond said in an interview. “The plan was to go public eventually to have our own currency to do the acquisitions, which we believe is a lot simpler than having to use cash every time.”

There are no shortage of acquisition targets in what is a very fragmented market in the technology consulting business, especially in the United States, he said. The trick is finding companies that are of sufficient size and have similar attributes to Alithya – proximity to customers, managers who want to stay on to run the operations and expertise with software providers including Microsoft Corp. and Oracle Corp., he said.

With the takeover completed, Alithya has about 2,000 employees, combined revenue of US$264-million and net debt of US$42-million. U.S. revenue now accounts for 34 per cent of the total, up from virtually none before. Five per cent of the business is derived in Europe and the rest in Canada. For the past seven years, it has made one or two acquisitions a year.

Mr. Raymond’s former firm, CGI Group, has been a consolidator of the industry, a well-established script followed often in the Canadian tech services business, which is a market-share game rather than one of developing software. In the past 10 years, CGI’s shares have climbed 750 per cent as the business has expanded. It now has a market capitalization of $20.1-billion.

Its success has been partly because of remaining close to the organizations it serves. It’s also highly focused on margins and its bottom line, as opposed to revenue growth at all costs, said Thanos Moschopoulos, analyst at Bank of Montreal. The company has won investor favour with a “disciplined, metrics-driven approach” to how it deals with customers and by keeping staff thinking as owners, he said.

Alithya employs similar strategies, Mr. Raymond said. “I’ve applied several things. One of them is that all of our employees are shareholders of the company. So we have a very interesting share purchase plan to attract and retain people. Most of our employees actually own stock in the company, and this is way before we were public. We actually did this as a private company,” he said.

“The other piece is discipline. When we do our integrations, we follow a process, we have a plan, we go through the steps and we’re very clear in what we do.”

On the acquisition front, it is seeking targets in the $25-million to $30-million range. Smaller deals than that are just as difficult to complete and the loss of a few people, as often occurs after a transaction, has a bigger proportional impact, he said.

For the interview on BBN (in English) click here.