Above: 15566 Helga Grodzinski, centre, with her fellow Canadians deployed to Camp Arifjan, Kuwait.

It’s mid-December and I am welcoming the mid-day sun as it warms up to a nice 23 degrees. These days are comparable to early June in back in Kingston, except that there is no green; just tan brown everywhere. July, with its dust-storms and highs of 55 degrees, seems very far away and long ago.

I am almost five months into my six-month tour as an embedded staff officer in the CJ35 Future Operations (FUOPS) Planning Directorate in Coalition Joint Task Force Operation Inherent Resolve (CJTF-OIR) Headquarters, at Camp Arifjan, Kuwait, part of Operation IMPACT—Canada’s Training Mission in Iraq. Coming at the 37+ year point in my career, this has been hands down one of the most challenging and interesting postings I have ever undertaken.

Canadian soldiers generally learn about corps headquarters in theory. To actually work in one is a tremendous eye-opening experience. To work in one leading the Defeat Daesh/Iraq Stabilization campaign in one of the most volatile regions in the world, in a coalition of 80 countries, adds a layer of complexity that has made me step up like never before. It is a fitting culmination of the skills and knowledge that I have gained over my long Canadian Armed Forces career.

I am one of six Canadians embedded in CJTF-OIR HQ, strategically placed in key staff branches: CJ2, CJ35, CJ4, CJ5 and CJ6. As a Future Ops Planner in CJ35, I am part of the staff that, in theory, plans ops about two weeks to 6 months ahead, although in reality timelines are often compressed and fluid between future and current operations. It makes for an interesting, often hectic environment. The days are long (typically 0800-2000 or later), but the weeks just smoke by. It is humbling to be part of this team. I work with exceptionally intelligent, experienced colleagues whose ability to plan and produce orders in a corps headquarters is awe-inspiring. 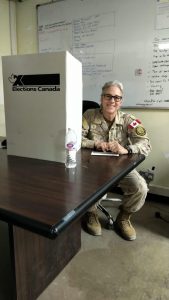 We receive our basic life support (feeding, shelter, etc.) through Camp Arifjan and our Canadian administration is tended to by Joint Task Force Iraq (JTF-I) and the Operational Support Hub South-West Asia (OSH-SWA), both located at Camp Canada at Ali Al Salem Air Base, also in Kuwait (about an hour’s drive away). One pretty cool highlight was when Camp Canada J1 staff, designated as Election Officers, hand carried the ballots to us so that we could vote in the October Canadian Federal Election without leaving our camp.

As host to a coalition headquarters, Arifjan is accustomed to soldiers from many nations, but as one of only six Canadians in a camp of 9,000 people, I am a pretty rare sight as I commute around the camp on an issued mountain bike (the only way to go!). The bright red and white Canadian flag on my shoulder is usually met with smiles and friendly people wanting to know what part of Canada I am from, as they seek to establish a personal connection. No one asks me if I play hockey, live in an igloo, or dog-sled to work (although I have told a few incredulous people that I occasionally snow-shoe to work).

It is not all privation and hard work. Arifjan is a major base with a large population and has many amenities (there are not one, but TWO Starbucks). There is a cinema and a great library which has been a haven for me on my precious Sunday mornings off. The US Army takes fitness very seriously and this camp has four superbly equipped gyms. Despite the heavy tempo of my position, I have been able to earn the odd t-shirt in a sports event and participate in some cultural activities. A highlight was a visit to the Grand Mosque of Kuwait followed by a lunch of traditional Kuwait cuisine (best hummus ever!) 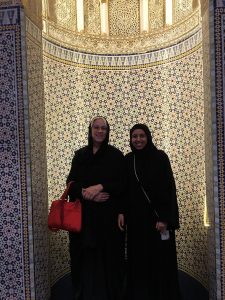 Visiting the Grand Mosque of Kuwait

One of the best things about being in a Coalition Headquarters is the diversity! I work with colleagues from US, UK, France, Australia, Croatia, Spain, Norway, the list goes on. I am particularly pleased to see so many women, well-respected in key leadership positions throughout CJTF-OIR. Irrespective of race, gender, or nation, we work together in an environment of shared goals and mutual respect. It’s an awesome feeling.

As a graduate of RMC (86), I have relied time and time again on what I learned there: leadership, time management skills and, through my Bachelor of Arts in English and Philosophy, skill in writing in English as well as a nuanced understanding of history and the human condition, something that comes in handy whilst working in a diverse team in a complex mission.

The CJTF-OIR campaign is evolving, focusing on creating conditions for enduring stability in Iraq. There will remain for the foreseeable future an important role for Canada to play in the campaign and in the region. I am very proud to have been a member of Operation IMPACT.

I encourage officer cadets reading this note to, first of all, strive for excellence in your studies at the Colleges, for this will form the core of your ability to think critically and solve problems creatively. Without question you are going to need these skills every day of your professional life.

You will be BUSY when you graduate: complete your phase training and go to your units, but say yes to as many things as you can—tasks, courses, professional development. Become experts in your fields. Then, grasp the opportunity to deploy: adventure, challenge and serving Canada by contributing to international security overseas. You have everything to gain. 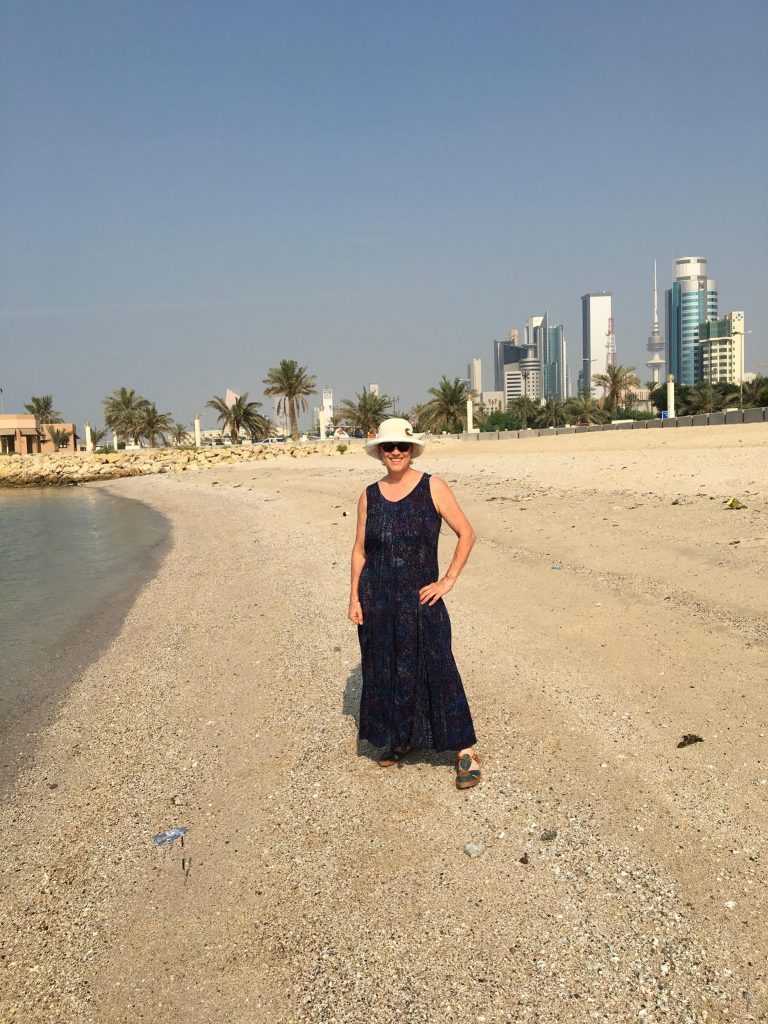