“We were all there at the same time for the same thing.” 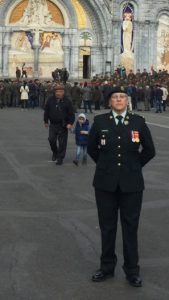 For the first Kingston Branch monthly luncheon of 2019, the branch members had the opportunity to go along with 15566 Helga Grodzinski as she took them through her participation in EX RESILIENT WARRIOR SPIRIT, the Canadian Military Pilgrimage to Lourdes, France, from 17-22 May 2018.

“I’ve been through a few gamechangers in my life,” Helga began. “This was definitely one of them.” That being said, she was surprised when she heard of the pilgrimage for the first time. “The formal military pilgrimage to Lourdes has been going on since the end of the Second World War. At the time I had been in the CF for 35 years and a practicing Roman Catholic since about 1990. How had I never heard about this?”

As she explained, Canada typically sends a contingent each year but eligibility for that contingent has traditionally been limited to CF personelle already stationed in Europe. In 2017 the CF opened it up to military members from all across Canada. Helga applied by writing an essay submitted through her local chaplain and was accepted as part of the RMC contingent. “I thought I’d be going more as a chaparone to the Cadets,” she recalled, “but they really looked after me far more than I looked after them.”

Padre Ryan Carter, a Muslim Imam, was the RMC contingent leader and he noted that Canada sent a very diverse group in its contingent, as did RMC. “It is a Roman Catholic pilgrimage, rooted in Roman Catholic tradition, but you did not have to be Catholic or even Christian. In selecting those who would go, we looked only for those who needed renewal, spiritual healing, or just a break. As a Mulsim Imam,” he joked, “I was kind of an oddity. The value for me was not in attending mass per se but in the spiritual experience.”

(Of special note, the Canadian contingent included veterans in addition to actively serving members. 13337 Stu Beare participated in this pilgrimage before continuing on to the Camino de Santiago.) 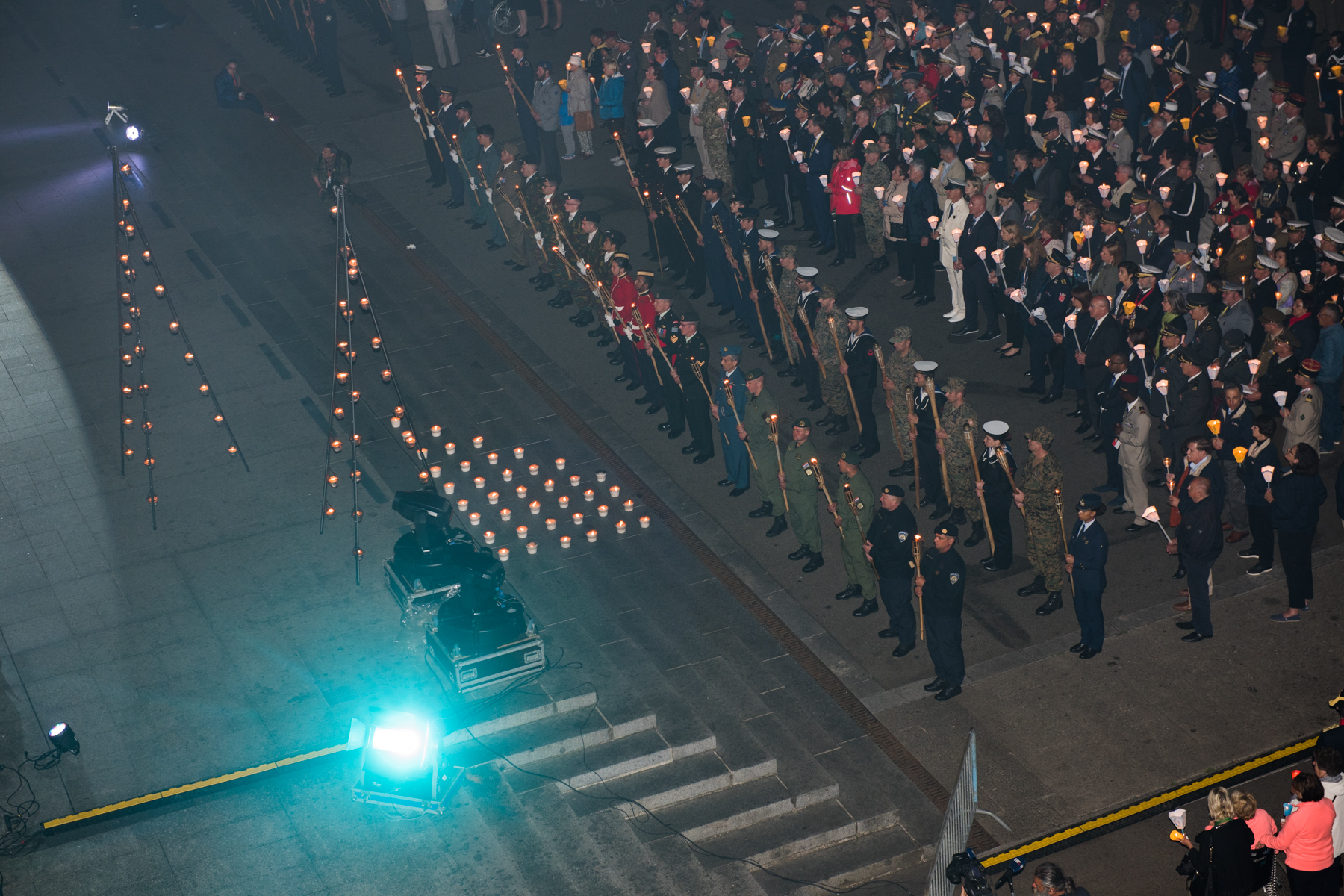 As Helga walked the Kingston Branch through her journey, including everything from the candlelit walk to a “dip” in the healing waters, it was hard not to be touched by what she was describing. “There were 15 000 military members there from all over the world, and we were all there at the same time for the same thing.” 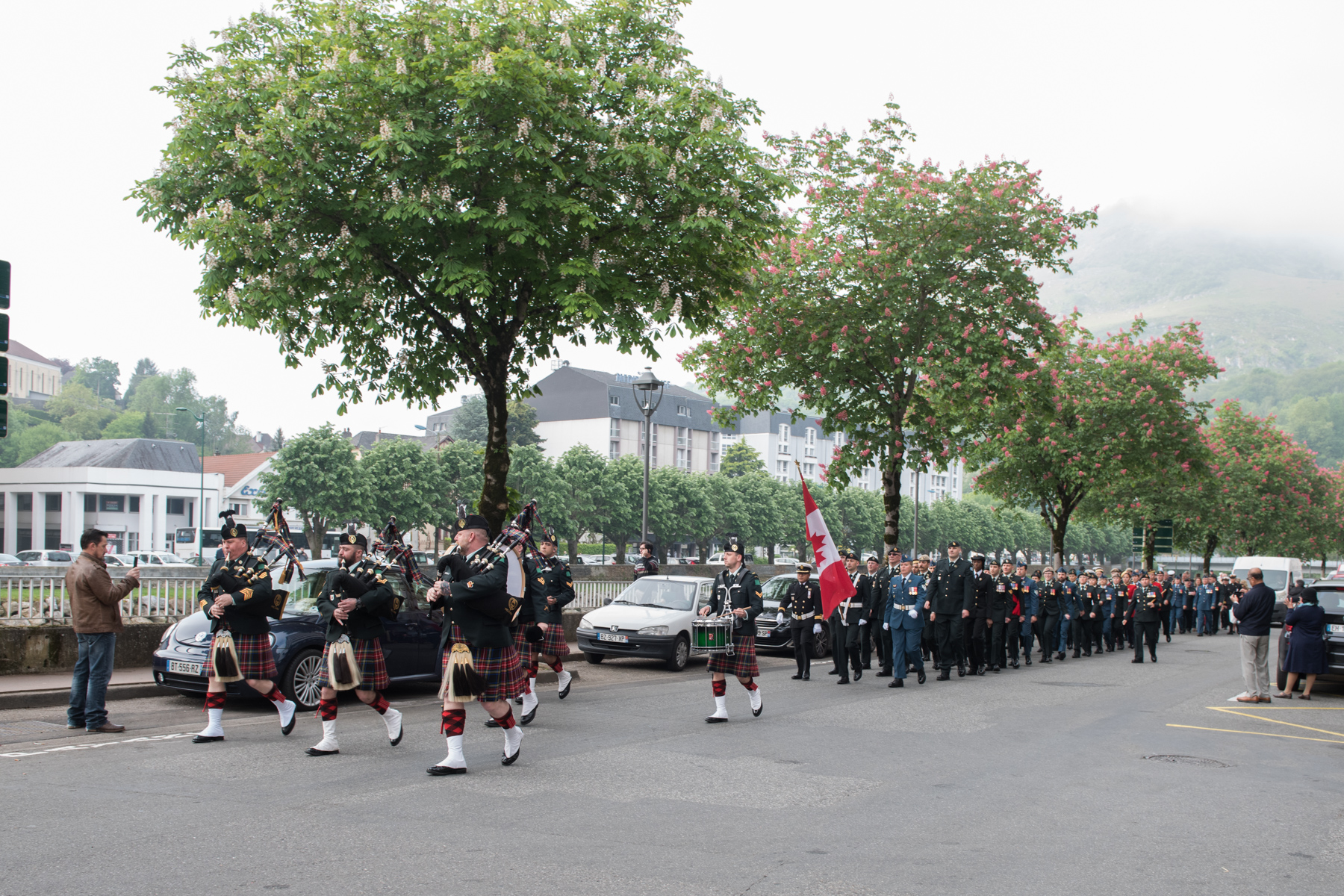 The trip was not without its lighter moments. “We had a pipeband and it was awesome!” she laughed. “Lourdes’ streets are very narrow and when our pipers started up people got right out of the way! And everyone wanted their picture taken with our Cadets in Scarlets!”

And, as will happen when you get groups from different nations together, there was a friendly rivalry as well. “We were billeted with the Croats and the contingent from Cote d’Ivoire and at night in the mess we’d all try to one-up each other. The Croats did their thing and then Cote d’Ivoire did theirs and then we had several of our pipers and drummers on stage and we brought the house down!”

As Padre Carter and Helga explained, the Lourdes pilgrimage is currently the only formally recognized military pilgrimage in the world. “There are others, but nothing quite like this,” he said. As Helga further clarified, “Soldiers have been coming there since right after the First World War, just trying to make sense of it all, although the importance of the site as a holy place goes all the way back to the 1850s.” Although the costs involved in sending the contingent were not cheap (all their airfare, travel, and living costs were covered), “The CF certainly does see the value in the experience.”

As for just what the value is for her personally, all Helga would say is, “I’d be more than happy to sit down with any one of you over a glass of wine and tell you just how this changed my life.”