“I was hooked and never let go”

For 15737 Bryan Brulotte (CMR 1987), there never really was any doubt about attending a military college. “I was very movitated to complete a university degree in a military setting,” he recalled. “In fact, I refused to apply to any other academic institution.”

That being said, military service does run in his family. “My father was in the military as an NCO,” he explained, “and rose to the rank of Chief Warrant Officer. At the age of 13 I joined the Army Cadets in a cadet corps affiliated with the Royal Canadian Hussars (Montreal). After the first parade night I was hooked and never let go. I lived with my family through five postings before I joined the College Militaire Royal at 17 as a preparatory year Officer Cadet.”

As has happened to other Kingston area Cadets when they went off to military college, Bryan spent all five years of his time away from Kingston, graduating from the College Militaire Royal in St. Jean in 1987. His biggest challenge, he said, was “containing my urge to join the regular army. As a young man I longed to join my battalion and ‘get my feet wet’.”

As he described his time in St. Jean, he went on, “Perhaps the most influential professor I had was Dr. LCol. Hal Klepack. He was the head of the Military Strategic Studies Program at CMR and an officer in the Army Reserves.  His intelligence, integrity, leadership and energy were absolutely infectious.  His impact on a whole generation of Canadian Armed Forces officers is still felt today. He was one of the most significant people in my life.”

Bryan graduated as Cadet Wing Commander (CWC) but it is the people he remembers the most. “The friends I made continue to this day and represent some of my deepest friendships,” the Kingston, Ontario, native said. “Overall, it was a wonderful time full of challenges.  Our professors were among the best in the world and the quality of the education was unmatched.”

Following graduation in 1987, as CWC, he was allowed to request his first choice of posting. Bryan chose a posting as an infantry platoon commander to the 1st Batallion R22eR in Germany. “For three years I was the platoon commander of 4 Platoon, B company,” he explained. “We were in constant operations and I spent about 6 months of the year in the field and the remainder on courses or in garrison. Near the end of my three year tour I was an infantry company 2ic. I then returned to Canada as Aide de Camp (ADC) to the Governor General.”

“In 1990, I entered a competition with other officers across the CF to be an ADC to the Governor General of Canada. I was appointed that year to the role.  I lived and served at Rideau Hall. The appointment meant that I travelled constantly with the Governor General of Canada.  We had a very packed schedule across Canada and around the world on countless events and state visits.”

“At the end of my two year tour at Rideau Hall in 1992, I was posted to the 3rd Batallion R22eR in Quebec City.  I was appointed as Officer Commanding Reconnaissance Platoon and we immediately were sent to Cyprus for 7 months. It was an incredible experience.  Upon my return, we began our ramp-up training to be sent to Bosnia.  At that time, I received a call to join a Federal Minister’s office as a Deputy Chief of Staff.  This coincided with my application for an MBA being accepted.  So I left the service in April 1993.”

Although leaving the Army was difficult Bryan does not regret it. “In a nutshell,” he said, “I had achieved the goals I had set for myself in the military and was seeking a new challenge. It was not easy, but the sense of confidence, persistence, and organization which came from my military experience was critical in my success.”

When asked to name a “few” memorable moments from his military career, he simply responded that there were too many to name them all. However, when pressed, he included Grad Parade as the CWC, finishing as the top candidate on Phase 3 Infantry Training, his last PT test at CMR, completing the French Commando course, airborne operations with the German and British armies, watching the Wall come down in Berlin in November 1989, his farewell dinner from Rideau Hall, serving as Officer Commanding of a rifle company with the Governor General’s Foot Guards (GGFG), being appointed as the Honorary Colonel (HCol) for the GGFG, and having a private audience with Her Majesty at Buckingham Palace as the HCol. (His appointment as HCol came after a long stint in both the primary and supplementary reserves.) 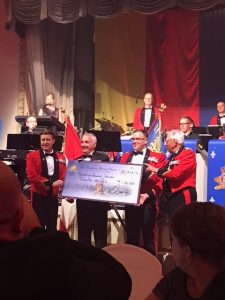 Bryan’s career in politics was not to be. “My civilian career in politics was short lived since we lost the election. (This was the PC party loss in October 1993 under the leadership of Kim Campbell.) As a result,” he said, “I launched my career as an entrepreneur from my basement and built the largest Canadian owned staffing agency in the country. This has been an all-consuming endeavour.  Today, we place over 14,000 people in jobs every year from our 14 offices nation-wide.”

“My greatest sense of accomplishment,” he explained, “is how MaxSys Staffing & Consulting allows me to pursue a philanthropic effort directed at the Military community.  This is based on four thrusts:

Bryan’s active duty career in the infantry may have been short, but his passion for the life and those who live it still shows. “Frankly, I embraced the military way of life, the culture, the camaraderie and the physical and mental challenges. I loved it then and still love it today.”