The Tommy Smart Cup will be presented at this week’s Varsity Awards Night, as it is every year, to the RMC Male Athlete of the Year. The following is the story of 1716 Thomas William Smart, the Cadet behind the Cup.

The following article from THE ARCH December 1982:

Thomas William Smart was born on 5 May 1906 in Chicago Illinois, where he passed his childhood days. After the death of his mother, the remainder of his family emigrated to Montreal, where his father was employed as an engineer by the Canadian National Railway.

In the fall in 1923, Tommy Smart was accepted for study at the Royal Military College of Canada. He was remembered by many, as the well-built fair-haired lad, with a most remarkable moral and physical courage, whose light blue eyes radiated a friendliness that could win over the hardest individuals.

Tommy had a great deal of difficulty adjusting to the system; he seemed physically incapable of ever turning out keen, “If his cap buttons were shined, his boots weren’t.” The consequence was that he was always on defaulters and probably received more circles than any cadet since the college opened.

In his third year at RMC Tommy made a bid for a position on the representative football team. His character, being a mixture of a keen willingness and a sincere anxiety to do well, with his spirit and drive, marked him out at every practice.

In those days, flying tackles were the big thing in football. They were usually hard on a fellow, but he had to master them to stay on the team.

After classes, on Monday 11 October 1926, the first and second teams were fiercely clashing in one of their usual practice games. Smart, on the defensive line, had broken through center, and proceeded, from a full running pace into a flying tackle on the player carrying the ball. Both players fell in a heap, with the offensive player immediately recovering from the exceptionally rough tackle. Smart, however, remained in a state of unconsciousness. He was taken to Kingston General Hospital, where the x-rays revealed that the fifth and sixth cervical vertebrae were fractured, and the spinal cord crushed. He passed the night under sedation in the hospital and the next morning the doctor in charge recorded on his medical sheet, “Respiration Ceased 8 a.m. 12, Oct., 26.” Tommy Smart was dead at 21.

My knowledge of Tommy Smart comes from reading an article, from the 1963 Review, entitled “The Immortal Cadet” That article was much like this one you are reading now except that it was concluded as follows,

“Today, Tommy Smart stands as a symbol of inviolable courage and persevering endurance in athletic endeavor to every cadet who sets foot on in RMC sports field. In retrospect, it is easy to see that Tommy’s contemporaries have now attained their prime of life. The remarkably strange thing is that Tommy is still a Cadet in RMC, in spirit at least, if not in flesh. And the shrill cheers that ring out over the grid in the heat of competition will always echo his memory, the memory of the Immortal Cadet. Thomas William Smart, college number 1716.”

My article ends with this simple question. Have we as, as RMC cadets failed Tommy’s memory? I, for one, did not know who Tommy Smart was, nor did I know that there existed an “Immortal Cadet” or should I say “Immortal Cadet??” 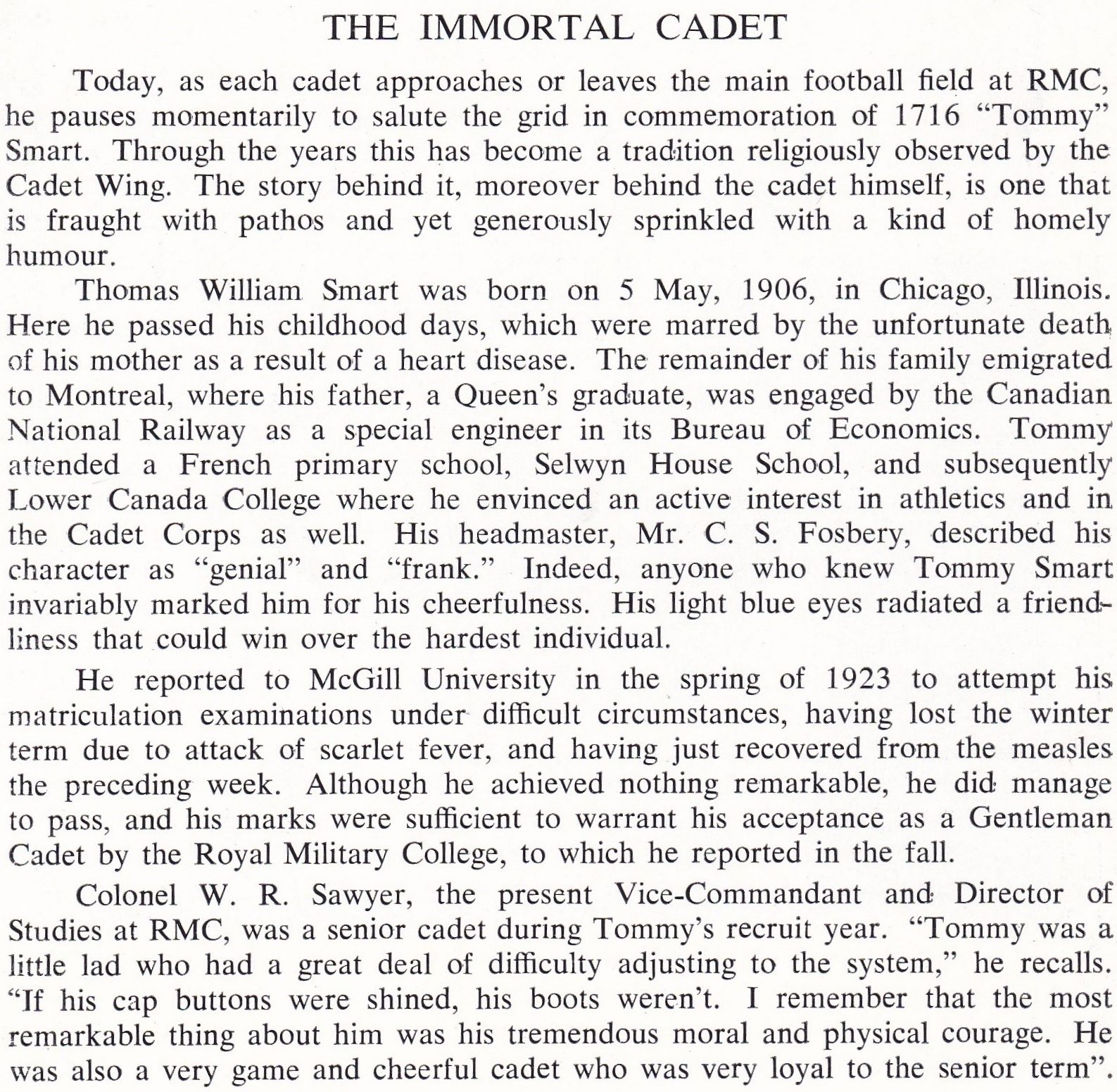 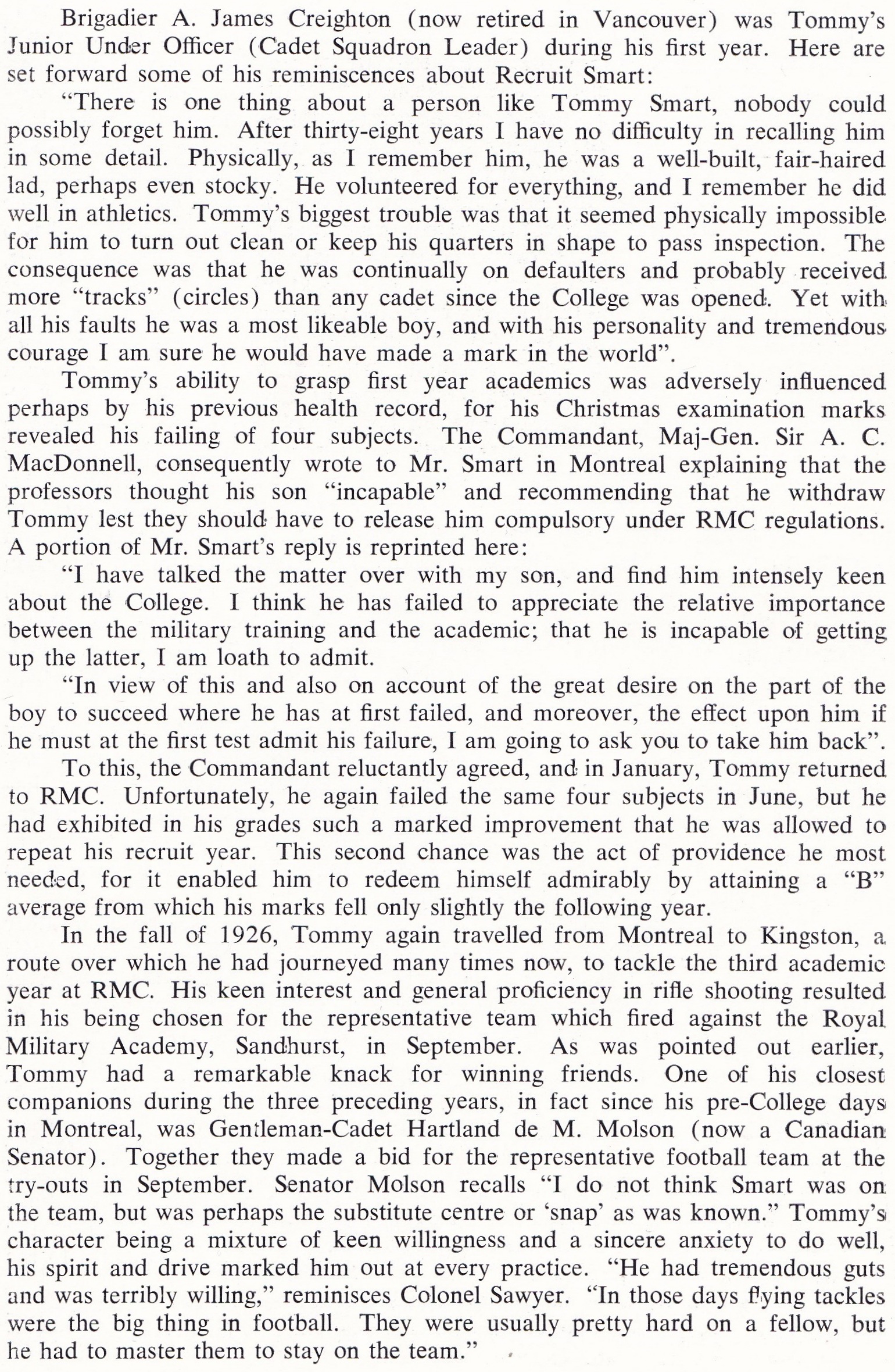 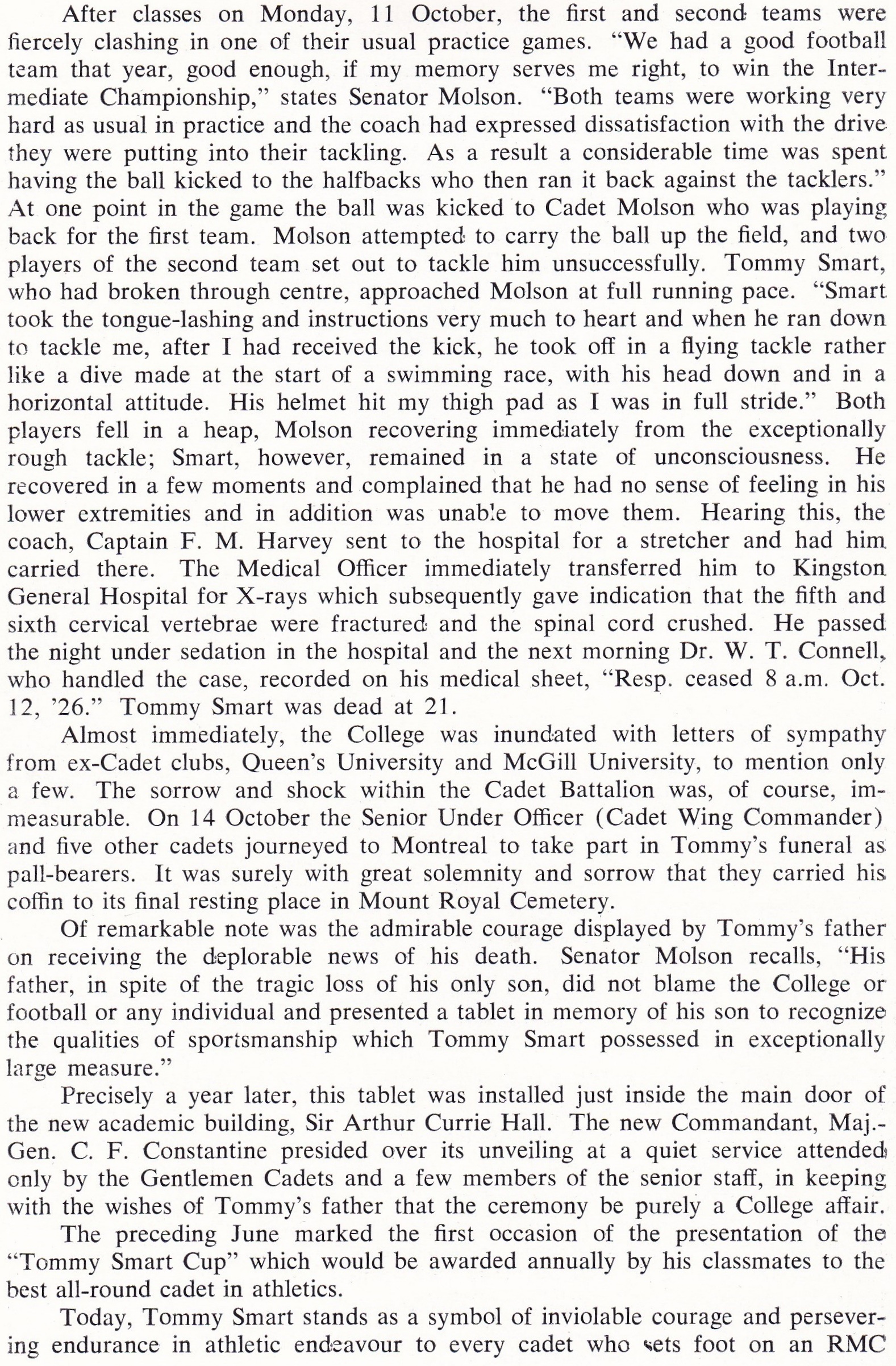 25366 Anna-Michelle Shewfelt: We Need Your Help