173 RMC cadets were commissioned in an impressive ceremony at the Royal Military College of Canada this past Friday, May 18.

On a bright sunny morning with a bit of a cool breeze – ideal for those on parade – Lieutenant General Paul Wynnyk, the Commander of the Canadian Army representing the Chief of the Defence Staff head-lined the military dignitaries in attendance.

All these senior officers took part in presenting commissioning scrolls.

A nice touch too was seeing a number of the soon-to-be officers receive their commission from their military relatives and / or friends. A special memory from both sides of the hand-shake.

A long-time tradition at RMC is the choosing by the graduates of two honourary graduates. 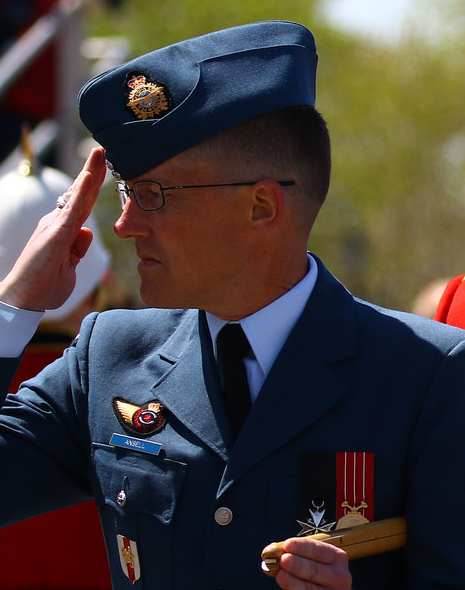 This year, the honorary graduates are (L) Warrant Officer Chuck Ansell, the 7 Squadron Senior non-commissioned officer, and (R)Mr Tomasz Deren, who is the Strength and Conditioning Coordinator of the Physical Education Department.

The speeches were kept to a minimum which is always appreciated especially by those on parade and those in the crowd.

Having said that, the address given by Lieutenant General Wynnyk was straight to the point and covered all the bases. There was no doubt that the ‘173’ got the message on what is expected of them and what lies ahead.

The Commandant, BGen Bouchard was his usual straight-talking self and caught the attention of everyone when he said words to the effect, “Graduating from RMC is not easy and was not intended to be.”

He applauded ALL of the graduates for attaining the passing level in ALL four pillars. 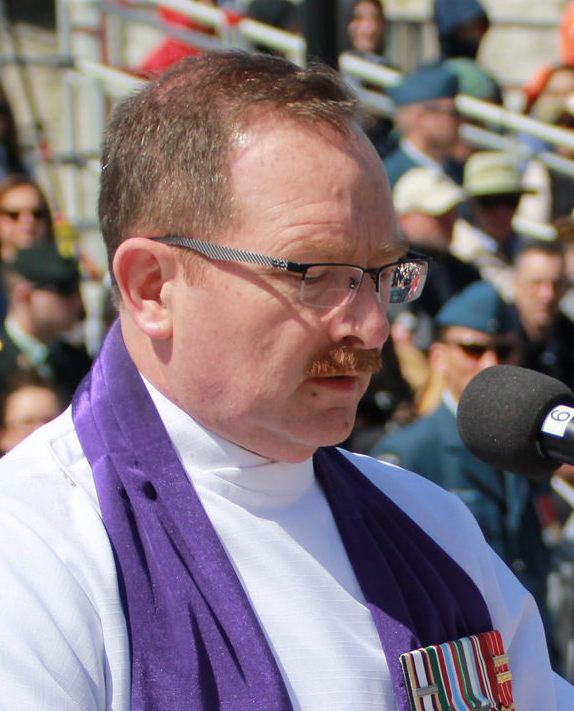 For the second day in a row, the senior padre at the college, Major Liam Thomas gave a well thought out invocation / blessing that was fitting for the occasion.

We have had the privilege of  attending a number of these graduating parades. The one portion that causes us to pause and reflect is when the fourth year cadets holding parade positions hand over the parade to the next senior class and join the graduates along with the 4th year band members.

The Class of 2019 leadership appear to be more than willing to take on the responsibility of leading the Wing come the next term. Much is expected of them.

The main event, of the morning, from our perspective is being at the Memorial Arch when the Class marches out as a group for the last time. A lot of thoughts went through this old head especially when we saw them ‘march in’ four years earlier. We interacted with many of them throughout that time. Truly some mixed emotions.

Hats off to CWO Rob Keating, Training Wing Sergeant Major and his assistants for setting the stage for a well turned out parade. The results were obvious that they all gave their damnedest.

Following is a breakdown on how this special event unfolded:

The Sword of Honour is awarded to the ROTP/RETP Officer Cadet of the Graduating Class who best combines high standards of proficiency in each of the four components of the RMC programme. The sword is donated by GE Canada.

The Department of National Defence Award of Merit is awarded to the graduating ROTP/RETP Officer Cadet attaining highest standards in each of the four components of the RMC programme.

27228 OCdt Olivier Beaulieu
The Sword of Distinction for Leadership is awarded to the graduating ROTP/RETP Officer Cadet who displays outstanding leadership through attaining the highest cadet appointment of Cadet Wing Commander (CWC) in their graduating year.

The Victor Van der Smissen-Ridout Memorial Award is awarded to the graduating ROTP/RETP cadet deemed to stand highest morally, intellectually, and physically at the Royal Military College of Canada (based on a vote by the cadets).

The MacArthur Leadership Award is awarded to the Officer Cadet who demonstrates outstanding leadership performance based on General Douglas MacArthur’s credo of Duty-Honour-Country and potential for future service in the profession of arms.

The Navy League of Canada Prize is awarded to the best Sea Operations Naval Cadet (Maritime Surface and Sub-Surface or Maritime Engineering) in the Graduating Class, based on high standards of proficiency in each of the four components of the RMC programme.

The Royal Canadian Artillery Association Prize is awarded to the best Combat Arms cadet (Armoured, Artillery, Infantry and Engineer) in the graduating class, based on high standards of proficiency in each of the four components of the RMC programme.

The Commander Arturo Prat Leadership Award is awarded to the graduating Naval Cadet who has demonstrated outstanding leadership, moral values, performance, and potential for future service in the Profession of Arms. The award is sponsored by the Chilean Embassy.

The UTPNCM Award of Merit is awarded to the graduating UTPNCM Officer Cadet attaining the highest standards of proficiency in the four components of the RMC programme.

The Canadian Forces Engineering Prize is awarded to the best graduating cadet enrolled in the military occupations of Maritime Engineer, Combat Engineer, Signals, Electrical and Mechanical Engineer, Engineering Officer, Aerospace Engineer, Communications and Electronics Engineer, (Air), based on high standards of proficiency in each of the four components of the RMC programme.

The Military Support Award of Merit is awarded annually to the best cadet in the graduating class from the Logistics, Health Care Administration, Military Police Officer, or other military occupation of the Support Group, based on high standards of proficiency in each of the four components of the RMC programme.

The Canadian Defence Academy Profession of Arms Award for Excellence in Military Professionalism (CDA) is awarded to a Canadian Defence Academy student for demonstrating excellence in military professionalism, leadership and character, and who has consistently displayed the highest values of the Canadian Armed Forces – Integrity, Courage, Academic Achievement, Fitness, Loyalty, Comradeship and Commitment.

The Leinster Shield is awarded to the ROTP/RETP squadron amassing the most points in the Commandant’s Competition, with events involving military, athletic and academic prowess. After each event, the squadron leading in the competition flies its pennant from a designated flagstaff and takes the right-of-the-line position on parade. At year’s end, the winning squadron will take the right-of-the-line on the Commissioning Parade. The position of right-of-the-line is traditionally a place of honour, as this was the unit that lead an army into battle.

The J. Douglas Young Sword of Excellence is awarded in conjunction with the Leinster Shield on Graduation Parade to the Cadet Squadron Leader (CSL) of the squadron winning the Commandant’s Competition. The sword will be carried by the CSL of the squadron until the next graduation parade. The fall and winter term CSL of the winning squadron will receive a commemorative plaque for personal retention. The college number of the Honour Slate CSL will be engraved on the scabbard to permit a continuing record.

The Major-General John Arthur Stewart Trophy is awarded to the top Military Engineer cadet in his or her graduating year whose occupation classification is Engineer (00181) or Construction Engineer (00189).  Sponsored by the Canadian Military Engineer Association, it is based on high standards of proficiency in each of the four components of the RMC.

The Harris-Bigelow Trophy is awarded to the Fourth Year Officer Cadet who has displayed the best combination of academic and athletic ability throughout the entire course of study at RMC. This trophy was given for annual competition by the Class of 1932 in memory of their classmates, No. 2039 T.W.E. Harris and No. 2021 J.G. Bigelow.

The Toronto Branch RMC Club Prize is awarded to the Fourth Year ROTP/RETP Officer Cadet who obtains the highest combined marks in Drill and Physical Education during the entire course of study at RMC.

The Panet Cup is awarded to the graduating Officer Cadet who achieves the highest average score in all four years in the Spring RMC Physical Fitness Test.

The Padre W.A. Ferguson Shield of Duty is awarded to the Officer Cadet who best exemplifies the qualities of civic duty that are the hallmark of an Ex-Cadet, through contributions to the College, the Club, and his/her community.

The Robert Bradshaw Award is awarded each year to the Officer Cadet beginning his Fourth Year who has distinguished him/herself in the field of mentorship.

More photos from the parade and the march through the arch –

2Lt Eliza Bruce: After the Arch