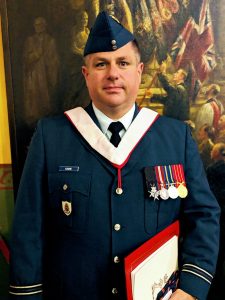 or 18131 Stephane Gagne, the recent RMC Fall Convocation (see here) held special meaning. “This 113th Convocation ceremony was very special for many people, particularly me,” he said. “I went to the College militaire royal de St-Jean in 1987/88.  I was not successful back at CMR in those years.  I went home in May/June 1988 and it was one of my saddest moments in my life.  I am now proud to say that, on November 2018, 30 years after I left CMR St-Jean, I finally graduated from RMC with my degree.”

The Baie Comeau, QC, native is currently a Sergeant in the RCMP in Ottawa and a Captain with the Cadet Instructor Cadre. Life may not have turned out the way he hoped when he arrived at CMR but it’s not a road he regrets taking. “I wanted to be a navy officer and go to CMR to study Military and Strategic Studies,” he explained. “As a prep-year student back in 1987, the bulk of my courses were sciences (physics, chemistry, calculus, linear algebra). I did not succeed in some of those courses and I was released in 1988.”

Nevertheless, he still has more than a few fond memories from his time at CMR. “There were a lot of good times at CMR but it’s hard to remember all of them,” he said. “For the Commandant’s birthday at CMR, we pushed a canon on his front lawn and the artillery guys fired it up. The rest of us sang happy birthday when he showed up from the door. It was 7 a.m. so I don’t think the city of St-Jean liked it very much!” (The Commandant at the time was 6116 Claude Archambault.)

“It’s a small world when you’re an ex-Cadet,” Stephane went on. “In 1993 or so, while studying in Montreal, I went to the Peel Pub in Montreal with a friend of mine from college and told him that the first time I ever went the Peel Pub was when I was at CMR with guys from my squadron (#2 Tracy Squadron) and one of them was 18252 Darren Snow. Well, I turned around and Darren Snow was working at Peel Pub as a manager and was working the bar!  He told me that when the CAF down sized in the early 1990’s he took a voluntary release and moved to Montreal and had been studying at the Universite de Montreal in history. That was a guy that was from Newfoundland if I am not mistaken and who didn’t speak French until he went to CMR and was now studying in a French university. And in 2015, in one of my online courses, the instructor was a Major who I was in the same squadron as well at CMR.  She married a member from another squadron from that time (who is an instructor at RMC).  18078 Lise Bourgon, 18067 Brigitte Allaire and I were all in the same squadron in prep year at CMR.  It is such a small world.”

Stephane received his college diploma from John Abbott College, Ste-Anne-de-Bellevue in 1992 and graduated from the RCMP Academy in 1997. “In 1996 I was actually sworn in the CAF again as a Cadet Instructor Cadre officer but at the time I could not be RCMP and a member of the CAF (even the reserves). The regulations were modified in 1998 to authorize the enrolment of RCMP members as CIC officers and eventually in the Reserves. When that happened, I was sworn in in 1999 as a CIC and, except for two years on the supplementary list, I have been an active CIC officer since then. And with the RCMP,” he explained, “I have started my twenty-second year of service. I have been posted in Manitoba, Saskatchewan and, since 2008, I have occupied various positions in Ottawa.”

Stephane currently serves as an RCMP Sergeant with the RCMP National Human Rights Policy Centre, which deals with all human rights complaints against the organization, and as a Captain with the CIC as a first aid instructor for the Regional Cadet Support Unit (Eastern) and a CIC Distance Learning Facilitator for officer online courses.

When pressed for favourite memories from his dual careers, he replied, “Working as an Honorary Aide-de-Camp for the Lt. Governor of Saskatchewan was one of the best ‘gigs’ ever.  I had the opportunity to meet very interesting people and promoting the Office of the Lt.-G was also very rewarding.”

So how, then, did he end up back with RMC to complete his degree? “In 2012, I completed the CAF PEMPO programs and that gave me the motivation to sign up for distance education,” he explained. That decision ultimately led to him receiving his degree at the recent Fall Convocation. It just goes to show that, no matter how Cadets leave the military college system, the desire to serve and the drive to succeed never really go away.