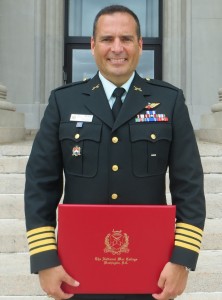 As an International Fellow, Col St-Louis was educated with officers from all four U.S. Services, foreign military representatives from 57 countries as well as civilians from the State Department, and other Federal agencies. Upon completion of the year-long program, graduates were awarded a Master’s of Science in National Security Strategy.

Because of NWC’s privileged location close to the White House, the Supreme Court, and Capitol Hill, it’s been able throughout its history to call upon an extraordinarily well-connected array of speakers to animate its discussions. This year, the students were able to listen to Colin Powell, Brent Scowcroft, Steve Forbes and General Dempsey amongst others.

In recognition of his contribution to the International Fellows Program, Col St-Louis was selected for the General Freytag International Award for Security Cooperation and Understanding.

During the course of the summer, Mike and his family will be returning to Ottawa and he will move into the position of Director of Current Operations at the Strategic Joint Staff.