“It’s that interaction with people as a commander, to put them first” 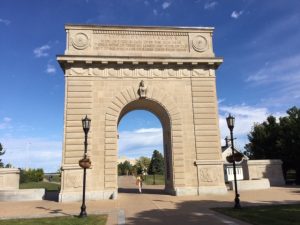 Eric had this to say of the Arch: “The words we had to learn to finally get dessert as recruits!”

“My father, 6777 Michel Charron (Class of 1967), served as well, and I enjoyed his Change of Command parades when he was a major so that might have sown an early seed,” he explained. “By the time I was 13, I had been in the Air Cadets for a few years and that convinced me that a military career was my calling as well.” As he went on to explain, a number of things drew him to consider the “University with a Difference.” “The appeal of a university in a historic location, small classes, bilingual offerings, a mandatory sports/fitness program and, I must admit, even the drill, pomp and circumstance were big draws for me.” (And, as it turned out, for his brother as well. 21621 David Charron graduated from RMC in 2000.)

Over the next four years in Kingston, Eric struggled somewhat academically. “I graduated College Louis Riel in Winnipeg and coming to RMC with Manitoba Grade 12 I was definitely behind on Math compared to classmates from Ontario and Québec especially,” he explained. “My average stabilized enough to stay in the Engineering program although 4 supplemental exams in Third Year was probably my worst time at the College.” He never gave up, though. “I buckled down and the profs were fantastic helping me study – I have to admit, some material I only finally understood right then and there. Finding an error in one of the questions of the Electrical Power Supp exam was a big morale boost. Capt Chicoine was most impressed! Thanks also to Dr. Barrett for his help in Stats and Dr. Drolet for his on Diodes!”

In addition to those professors, Eric credits two others in particular with helping him get through. “4459 Commodore Ed Murray provided an early very impressive example of what a leader was all about. It was a great pleasure to see him again in Kingston recently – he even remembered my name before I introduced myself! Padre Marcoux (RC Chaplain – now deceased) was a solid pillar, both at Sunday mass and anywhere you would find him on the College. He certainly provided some grounding during tougher times.”

Fortunately, all Eric’s hard work did leave time for a few “fond” memories. “The end of ROC term after the obstacle course was a major high,” he said. “Kilo Flight thought it could take on the world after that! I also enjoyed competing with the Fencing Team and in my Fourth Year, when I was Captain of the Men’s Team, we came back with the USMC Westpoint Trophy! And then there was Grad, of course – first parade in my life when I thought I would faint before the end. Throughout it all there was also the friends, the skylarks, the formal balls, etc.”

Following graduation, Eric completed occupation training as a Communications Electronics Engineer (CELE). “I’ve served in Kingston (C&E Home Station), Ottawa (x2), Borden, Den Haag (NL), Winnipeg (x2), Hamburg (GE), Kabul (AFG), and Toronto. It will be 31 years of service this summer!” Looking back over it all, what stands out the most for him? “Command at all levels,” he said simply. “From my first tour as a 2Lt/Lt with a troop of techs, then operators, to Major as a Sqn OC (CFJSR) and now an RCAF Wing Commander. It’s that interaction with people, to put them first and then the mission would always get done!” 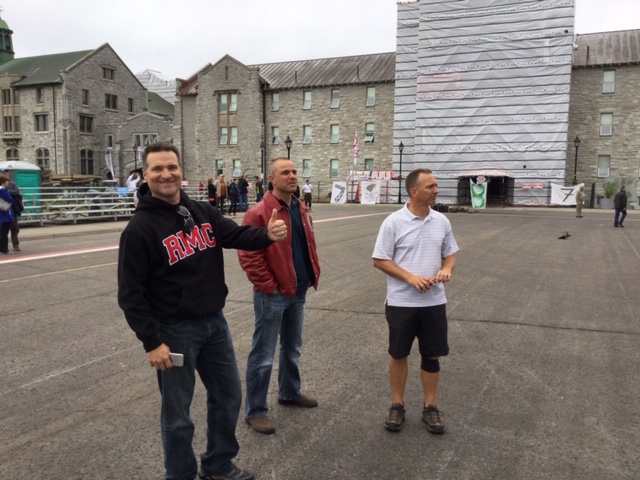 Eric may not have ever expected to serve as a Wing Commander but he is certainly enjoying life with his family in Winnipeg. “I’m married to a wonderful woman teaching at the University of Manitoba and we have two teens (boy/girl) in high school which just happens to be the same school I was attending when I joined in 1988!”

As for those he went through military college with, he keeps in touch as best he can. “With a handful who stayed in uniform, for sure,” Eric said. “Many got out after minimum time or under the infamous Force Reduction Plan – they all did very well for themselves! Our 25th Reunion in 2017 was the first time I was able to make it back – what a grand time it was! We shared a lot of laughs as we got caught up on our various life paths since 1992.”