18524 Chris Theal (RRMC 1992) is Vice President and Chairs the Investment Advisory Committee of the RMC Foundation.

His grew up in St. Catharines, Ontario; graduated from Sir Winston Churchill Secondary School in The Garden City before he departed for Victoria, B.C. and Royal Roads in 1988.

He now considers Calgary as home.

Chris is the father of two – Daniel (17) and Jacqueline (15), and enjoys every part of watching them grow up into bright, inquisitive and athletic young adults.  As this goes to print, Daniel is on a six week school exchange in Caloundra City, Queensland, Australia.

A grade 11, Chris Theal had the opportunity to be part of a formal tour of the RMC campus; he walked away committed to attending military college following his high school graduation.

He did all four years at Royal Roads. “Recruit term was such an intense experience and one that you look back on 25 years later through a different lens, Theal said.  “The passage of time (and healing of wounds:) allows you to fully appreciate the bond that was created with your classmates and the teamwork it took to get through the entire first year.  Pit parties, spit parties, rowdy hour during exam routine and the Ritz Club were some of my fondest first year highlights.”

Chris was the Cadet Wing Commander in fourth year and received the Sword of Honour and US Naval Institute Award of membership at grad parade.  “That was pretty special.” 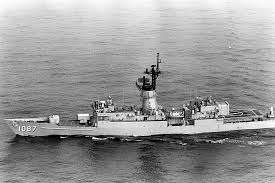 He had a chance to sail as an exchange cadet on the USS Kirk during the summer of 1991.  It was part of the USS Missouri battlegroup celebration tour that went all the way up and down the west coast on the heels of that group’s contribution to victory in the first Gulf War.

“I focused my undergrad in economics, which ended up being a solid foundation for my civilian career.  The profs that stand out for me are Peter Gardiner and Peter Dunnett.  Both superb economists and our classes were so small back then that it was so specialized and interactive.”

Also, he has pleasant memories on a number of fronts of those who were serving in uniform during his time at RRMC.

“As far as college staff, I had a lot of interaction in my senior year with the Commandant, then Colonel Mike Caines, the DCadets, then Commander Jerry Gadd and the SoC&MT, then Major JY Caron.  They were great mentors and I learned a lot about leadership and accountability in my senior year.”

He had a special ‘shout-out’ for Major Caron. “He was our varsity hockey coach and was a standout in so many aspects of developing us as cadets and young men and women.”

“By far the biggest challenge was balancing military and academic life in first year.  As we all know, it is designed to test your mental and physical limits and you end up proving a lot about yourself and what you can do as a team.”

Following graduation he served as a MARS officer for three years in the Pacifice fleet.

“Memorable moments were RIMPAC 1994 and Operation Forward Action – the UN embargo of Haiti, for which we earned our CFPM.  That was on board HMCS Kootenay.”

His voice was filled with genuine warmth and pride in describing a special milestone.

“By far the greatest moment was receiving my Bridge Watchkeeping Certificate in Pearl Harbour in May 1994 from Commander Dave Kyle – aka killer Kyle…it meant a little more coming from him and everyone else in the fleet knew it.”

With a gleam in his eye he also mentioned three mates.

What were the circumstances on why he only served three years following graduation?

“I left the Forces in 1995 under the Forces Reduction Program (FRP) as part of the Liberal government ‘do more with less philosophy’ for the Forces.”  After completing his MBA at UBC, he moved to Calgary and got into the investment research business in 1998 and worked to receive his Chartered Financial Analyst (CFA) designation in 2000.

“I was one of the eight founders of an energy investment banking boutique called Tristone Capital, which we started in 2002 and sold in 2009.  After 13 years as a research analyst and head of energy research, I ran an energy hedge fund for four years.”

He added.  “In 2015, I joined Velvet Energy, an entrepreneurial and growing oil and gas producer, as Chief Financial Officer.

We touched base with Chris concerning his relationship with the RMC Foundation.

“I joined the Foundation board two years ago.  Early in my days in Calgary, I connected with RMC alums Bob Booth and Maj. Gen (Ret’d) Cam Ross.  I was very involved with the Calgary Birchall Leadership dinners with Bob and Cam.”  Both of them joined the Advisory Committee of the hedge fund that I ran and have been great mentors in my professional career.”   He added: “So when asked by Bob to consider joining the Board, it was an easy decision for me and I felt like I had the time to give back to the colleges via the Foundation.”

It is obvious that Chris has the same enthusiasm and commitment for his involvement with the RMC Foundation as he did as a Naval Cadet, military officer and his professional civilian career.

“I have been very impressed with Board governance and the standard of care the Board and the Foundation staff have in the daily management and oversight of the Foundation.”

He also made a point of saying,  “I am also very motivated by the fresh, energized faces in the Foundation office and look forward to working with the team in building a 10 year growth plan for the Foundation.”

The confident Chief Financial Officer, for Velvet Energy Ltd. also was pretty clear with this message:

“I am an active contributor and encourage all to think of the foundation the colleges provided for their respective careers and consider giving back so that you can play a direct role in enhancing the cadet experience at the colleges today.  Whether for tax / estate planning or monthly contributions, they are meaningful and give you a chance to reconnect with the colleges and have a sense of ownership with your alumni.”