18866 Eva Martinez’s (RMC 1993) love affair with aviation began on a transatlantic flight when she was five. “I was born in Barcelona, Spain, in 1970,” she explained, “when Franco was still in power. My family was motivated to immigrate to Canada as the economy and political stability in Spain kept weakening. We moved to Toronto in 1975 (on that transatlantic flight).” She is a proud Canadian with a strong Spanish heritage. “I consider Barcelona ‘where I’m from,’ Toronto ‘where I grew up,’ and ‘home’ is wherever my family and I are living!” Eva is married to 18329 Bill Foster and they have three kids – Emi, Ken, and Willa.

As a teenager Eva joined the Royal Canadian Air Cadets in Toronto and this “naturally” led to applying to RMC. “I enjoyed the discipline and training of the Cadet program,” she recalled. “When coupled with a ‘free’ university education it made applying to RMC feel like a very natural decision. I learned as much as I could as early on as possible about the entrance and selection criteria for RMC and applied as soon as I was able. I had applied and was accepted to McGill and Queen’s as well but my heart was set on RMC.”

She has more than a few fond memories from her four years as a Cadet. “In third year,” she said, “I was selected to be a part of the exchange program with cadets from Ecole de l’Air (the French Air Force Academy). One week in November saw the French cadets travel to Canada with planned visits to Quebec City (including La Citadelle, Tac Hel flights, and a Nordiques vs Canadiens hockey game), and Ottawa including Parliament Hill and Rideau Hall). After Christmas, the RMC cadets traveled to Salon-de-Provence, France via Lahr, Germany to enjoy the beautiful French countryside, flights in Fouga Magisters over the French Riviera/Cote d’Azur, skiing and fondue in the French Alps (Ancelle), and a wonderful few days exploring every major attraction in Paris. In my opinion, the RMC Cadets got the better end of the exchange!”

Eva has fond memories of many staff members as well. “I have wonderful memories of Dr. P.A. Lagueux, Dr. Derrick Bouchard, and then-Commandant Commodore (ret’d) Ed Murray and his wife, Gail.  Each of them, in their own unique way, extended support and encouragement when I felt I was at a crossroad and needed to make a decision,” she explained. “They challenged my thinking and provided perspectives that I had not previously considered.” Her relationships with them weren’t “formal mentor/mentee arrangements” but they were still instrumental in her personal and professional growth as a leader. “They are a testament to the importance of having a well-rounded base of support at every stage of your career.”

Eva Martinez graduated as an Aircraft Maintenance Officer (AERE) in 1993 but had a very roundabout career. “Immediately following the AERE Course at CFSATE in Borden in 1994 there were more AERE officers than positions available so I took a posting to the Canadian Forces College in Toronto as a junior staff officer to run the Wargame Exercise and Simulation Section,” she explained. “For two years, I had the distinct privilege of meeting and working with senior officers (students and directing staff alike, nationals and internationals) from across all elements.  I also took advantage of the many fantastic guest lecturers to gain insight into military and geopolitical points of views that a junior officer would not normally be exposed to.”  From 1996-2000, she served as the Deputy SAMEO at 413 Transport and Rescue Squadron in Greenwood, NS.  From 2000-2002, following a promotion to Major, she moved to DRDC Toronto (then known as DCIEM) to run the Aircrew Life Support Equipment section.  Eva made the decision to leave the RCAF in 2002 to transition into the private sector. 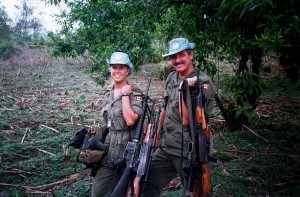 “By far the most memorable time of my military career occurred in 1997,” she said, “when I was selected as Canada’s first female United Nations Military Observer as part of Canada’s contribution to the peacekeeping mission in Guatemala. I was also the only female in the international contingent of 155 military officers from around the world deployed to Guatemala to oversee the ceasefire and peace agreement following a 36-year civil war.”

Eva had other memorable moments as well. For example, as she explained, “I was often called upon to support conferences and visiting dignitaries when the primary language was Spanish. This included SICOFAA (System of Cooperation Among the American Air Forces) and CONJEFAMER (Conference of the American Air Chiefs). Besides establishing a network of Spanish-speaking DND personnel, many of whom I’ve remained in contact with, these conferences exposed me to important protocols and conventions amongst Latin American nations. In support of these conferences, I traveled to Bolivia, Chile, and Peru.”

Since leaving the Air Force in 2002, Eva has been working the aviation, aerospace, and defence sector. “I’ve worked in small companies, large corporations and everything in between, holding roles of increasing responsibility across different aspects of business,” she said. “What I’ve enjoyed the most is the opportunity that this sector provides to stay connected with current and former serving military members, and seeing the collaboration between industry and government stakeholders to provide solutions that improve Canada’s ability to defend our country and allies.” She currently works for PAL Aerospace as the VP of In-Service Support, most notably overseeing the set-up and execution of the maintenance of and logistical support activities for the Royal Canadian Air Force’s new Fixed Wing Search and Rescue aircraft. As Eva described it, “Of all the time I’ve been in the aerospace and aviation sector, this role most closely resembles my AERE past and it feels like my career has now come full circle.”

7812 Reg Shortt Still as Active as Ever