Above: Christyn Cianfarani delivers opening remarks to over 900 attendees gathered at CANSEC 2019 on May 29, 2019. 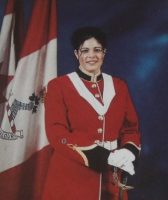 For 19803 Christyn Cianfarani (RMC 1995), making WXN Canada’s Most Powerful Women in 2018 was a long way from Leamington, Ontario, (“the Tomato capital of Canada”) where she grew up. What hasn’t changed, though, is her desire to be a part of something that’s more than just a paycheque.

“In my second last/last year of high school, a guy I knew (who subsequently went to the College at the same time as me) had looked into recruiting and was talking about RMC in the hallways,” she explained. She was hooked from the start: “RMC offered the chance for me to further my education in exchange for service. I was able to get a post-secondary degree even though my family lived quite modestly, and that’s something for which I’ve always been very grateful.”

Christyn graduated from RMC in Kingston in 1995 and like most ex-Cadets she has more than a few fond memories of those years. “A couple of days before school started in the fall,” she said, “5 Sqn would have its annual ‘crazy pants’ party. This was probably the closest we got to something that resembled being at civilian university. Not only did it include all the antics that one would expect, but it was one of the few moments in time where we connected with each other on a personal level across all four years of students.” 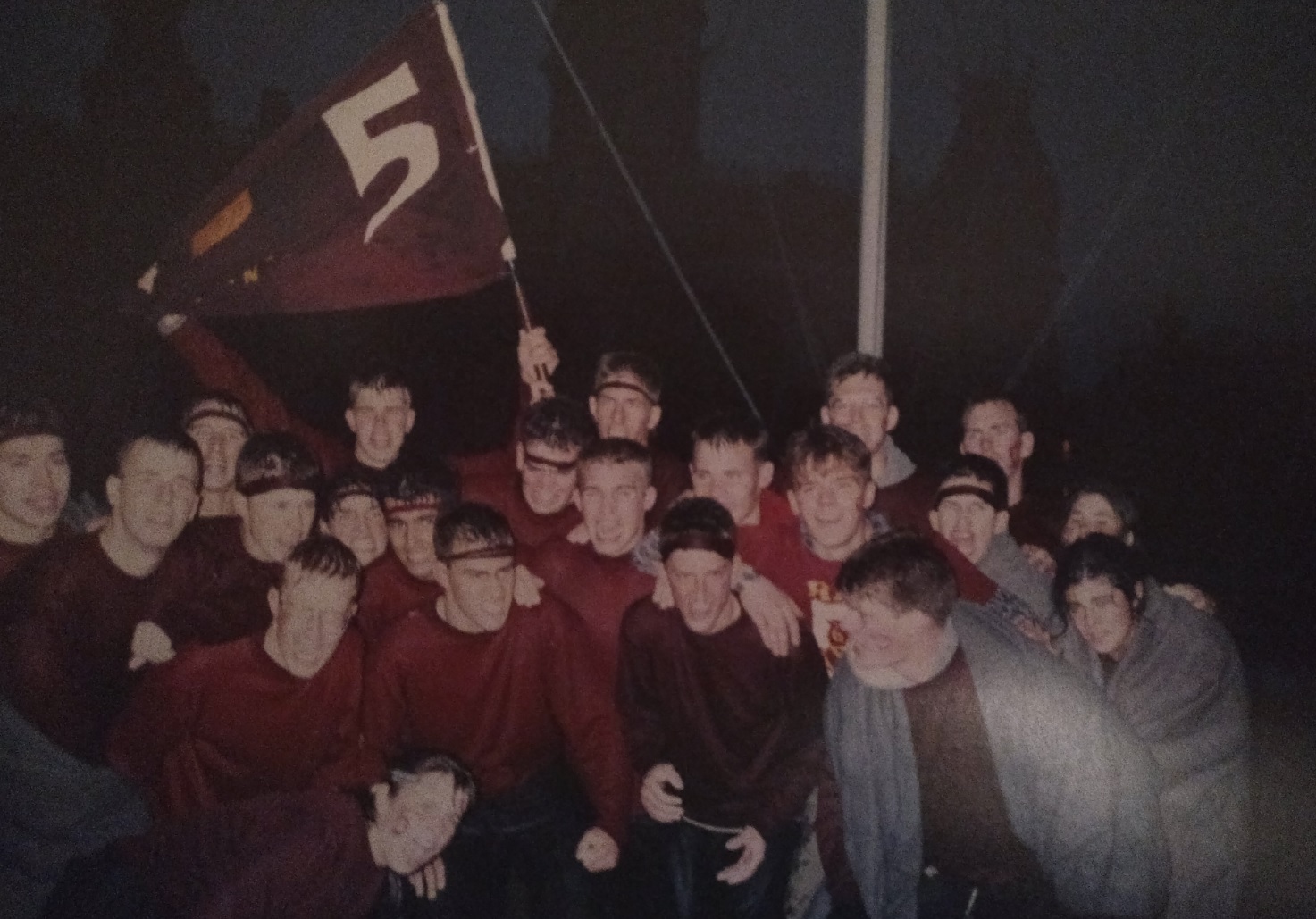 Christyn Cianfarani (far right) during her time at RMC.

“I was also at the College during the years when the Tragically Hip were still playing Kingston every summer and fall, usually at Fort Henry,” she went on. “If you weren’t at the concert, you could hear the band from the parade square or in the dorms if your windows were open. They would end the set with ‘Long Time Running.’ I can’t listen to that song without thinking of the College in the late summer and the noise of the bridge on the Causeway.”

Her time in military college had its challenges, too. In her second year she suffered a number of traumatic lower-limb joint incidents on the volleyball court, leading to four surgeries over two years.

“Being unwell at the College was extremely challenging, both physically and mentally,” she said. “At the time, RMC did not have the infrastructure to accommodate persons with injuries, and the culture was decidedly harsh for students who were different.”

When asked if there were any staff or faculty who still stood out in her memories, she was quick to single out her teachers in the English Department and her second-year Squadron Commander, Lt (N) Cowie.

As Christyn elaborated, “The English Department was a tight-knit group and we were a tiny number of students in my last year – six of us taking English Literature as our major.  As a result, the teachers were more like mentors.  They welcomed us into their homes and advocated for us within the greater student community.”

“As for Lt(N) Cowie,” she said, “I believe that there is a rugby award now named after him at the College since his passing from cancer.  He was my squadron commander in my second year.  At that time, he had stopped his cancer treatments in order ‘to live’ his final days,” she said. “That brave choice in itself is something that I have never forgotten. One evening he took me aside and put me through the ringer on some of the personal choices I was making (unrelated to the College’s military agenda) and told me he felt I was selling myself short. He said that he thought I was going to go far in life and that he didn’t understand why I couldn’t see my own potential.  I have never forgotten that interaction. To this day, I tell people who ask me for career or professional advice that you never know when you are in the presence of someone who sees something in you that you cannot see.  And if you are a leader – a good leader – you need to sponsor and encourage people that you encounter who show real potential. Lt (N) Cowie was one of those people for me.”

While she entered the Forces as a Maritime Surface and Sub-Surface (MARS) Officer, she initialized the process of release and in parallel applied for her Masters Degree shortly after graduating RMC. “To put this in context,” Christyn said, “in 1995 the CF was releasing many active serving members through the Forces Reduction Plan, largely due to funding cuts. (It’s what is commonly referred to in political circles as the ‘decade of darkness’.) In late 1995 I went on leave-without-pay to start a Master of Arts at the University of Toronto and released in 1996.”

Despite her early exit from the military, Christyn hasn’t left that world behind. She’s had a 20+ year career in the private sector, all of it in the defence domain. After 17 years at CAE, she took over as CADSI’s president and CEO in late 2014. 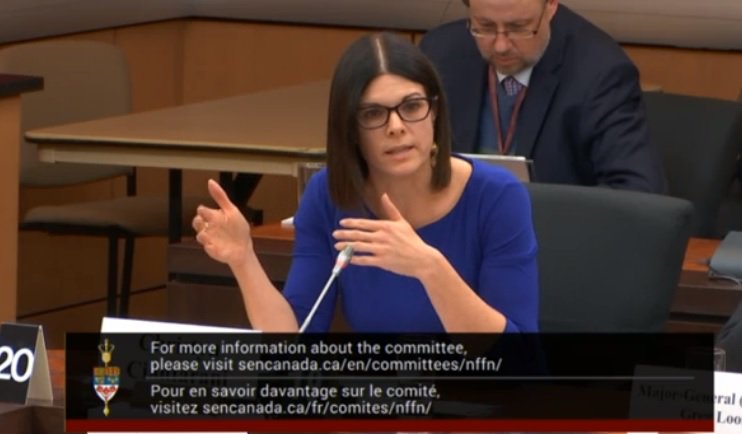 Christyn testifies before the Senate’s Standing Committee on National Finance in April 2019.

“My chosen career has afforded me the opportunity many times over to be involved in something much bigger than simply going to work each day for a company and a paycheque,” she said. “I’ve been involved in making products that have saved people’s lives.  I have participated in studies and created policy that has changed our industry and is building parts of our country for the future.  I have also been able to shape our association – CADSI – to better look after our employees and their families.  All these things have specific memories attached to them.”

As Christyn is quick to clarify, it’s the leadership lessons instilled years ago by those like her English professors and Lt (N) Cowie that have helped her succeed as she has. “I took their life-lessons on how to relate to people and still maintain authority as examples and have applied them in my own personal life with my employees.” 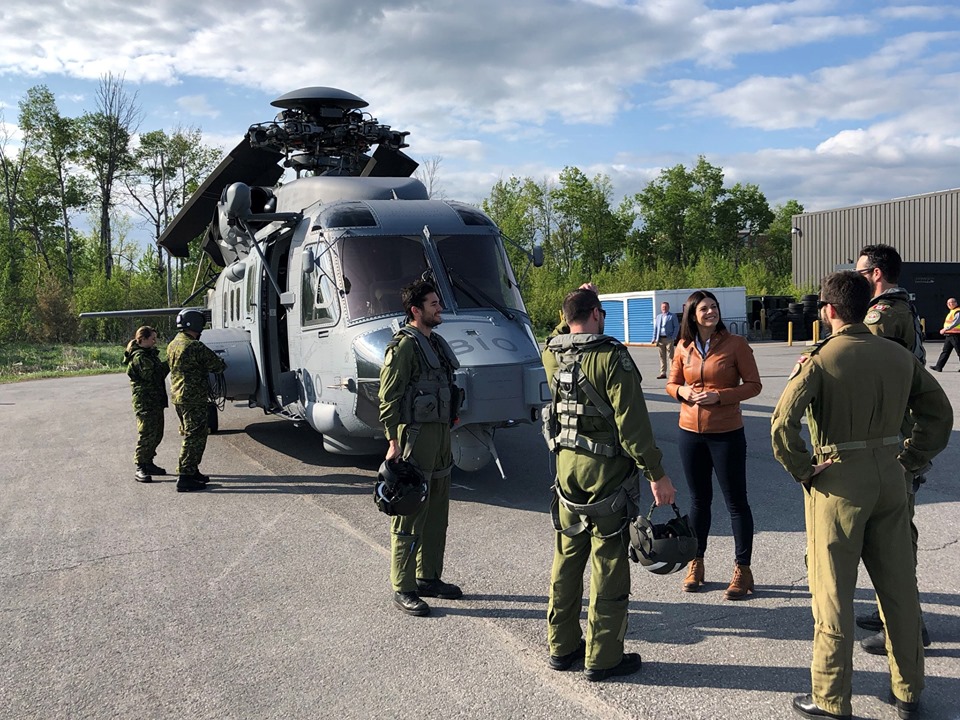 Christyn chats with members of the RCAF during CANSEC 2019.