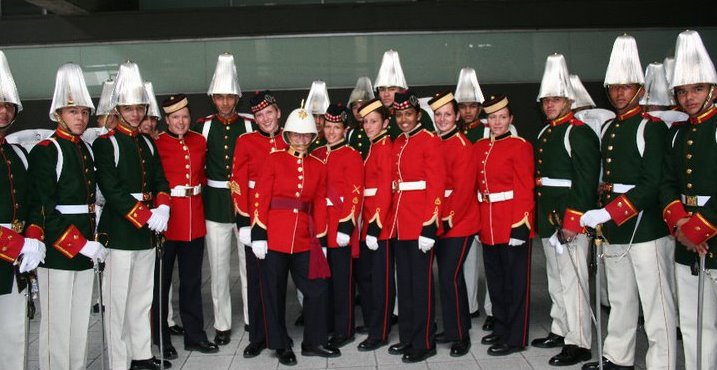 Anniversaries are an important aspect of military tradition, and give a chance to celebrate the history and heritage of years gone by, a fact that CF members know well with 2010 commemorating the Centennial of the Royal Canadian Navy. Unbeknownst to most, our Mexican allies also have cause to celebrate. This year marked the 200th anniversary of Mexican Independence, and the 100th anniversary of the Mexican Revolution, culminating on September 16 in one of the largest celebrations ever witnessed in the country. Mexico invited 16 delegations from Military Colleges across the world to join in the festivities, and RMC was more than happy to oblige. 31 cadets departed the gates of RMC on a rainy morning on the 8th of September, and found themselves staring at the Heroic Military College of Mexico shortly after midnight. At first glance, the facility looks like a giant concrete bunker, immediately disappointing some cadets who hoped that the college was based in Cancun, and not the heart of Mexico City. Cadets took some time to get used to the food, which inevitably turned out to be the infamous “Refried Beans”, not-so-cleverly disguised as something else. Official reveille occurred at 0500, however the bugler responsible often entertained us with songs between the hours of midnight and 0200, quickly becoming the most despised character in Mexico City. It was indeed a culture shock for the RMC delegation that started immediately longing for the life back in Kingston. Very quickly however, the small inconveniences gave way for the immense cultural opportunities and experiences that most will never repeat in their life.

Within a week and a half in Mexico, cadets had already been to the top of the Pyramid of the Sun, explored the beautiful Chapultepec Castle where the college used to be located, roamed the streets of Mexico and experienced local food and culture, and of course purchased traditional Mexican Luchadore wrestling masks, giant fake moustaches and sombreros half the size of a small car. We were privileged to observe a gigantic parade depicting the history of Mexico, from the struggle for Independence to the modern day, including the reenactment of battles with over a thousand people, complete with horses, artillery, and even a fully operational steam train that chugged across the parade square. We witnessed live fire demonstrations from WWII planes, casualty extractions via helicopter, skydivers, trained eagles and a boy draping himself in the Mexican flag and jumping off of a castle, all describing the beautiful history of the nation. Although the narration was in Spanish, we understood the story, and for the most part couldn’t believe our eyes. A few days later, RMC took part in a 9km parade throughout the streets of Mexico City, dressed in Scarlets and being cheered on by hundreds of thousands. We passed the Presidential Palace and saluted the President and dignitaries of many nations, and as the 22 year old cadet representing the entirety of Canada, I have not felt that proud or honored in my life. These were some of the events that our delegation took part in, but the people we met must also be mentioned. 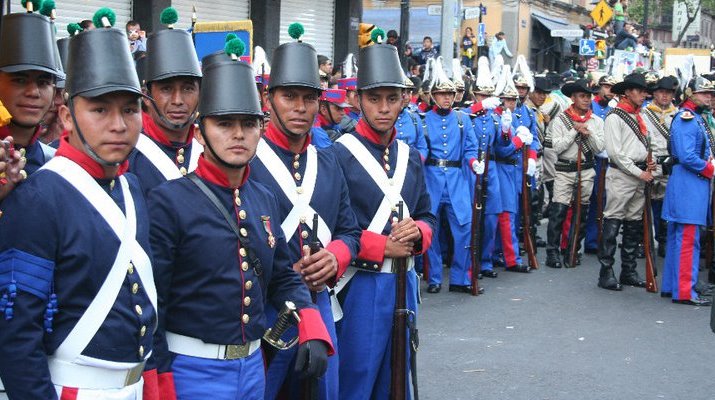 Living in a dormitory with 15 other delegations from different countries, the international flavor quickly spiced up our downtime. The outgoing nature of the Columbians, Argentineans and Chileans made sure everyone in Mexico City knew that the delegations were in town, singing songs and cheering at full volume from a double-decker bus through the city. The Russians became the target of some ribbing, due to their underwear calisthenics at 4 in the morning. It must be noted that the stereotype of Brazilian soccer skill is absolutely true, as our six cadets became pylons to dribble around, and embarrass at every opportunity. Even the Chinese Honour Guard cracked a few smiles at the antics of the Spanish and French delegations, who some would say took full advantage of their leave of absence from their home academies. None was more popular however, than our Canadian delegation. Everyone in that college wanted to talk to us, take a picture with us, trade some sort of trinket and generally be in our vicinity. The 31 cadets were selected on the grounds of their extraversion and ability to communicate a professional, yet very friendly image of RMC, and they did just that. RMC is extremely grateful to the Heroic Military College, the Canadian Embassy in Mexico and indeed the entire nation of Mexico for their hospitality and especially for the incredible show that they put on throughout our 11 day stay, and I can only hope that for the Canadian Bicentennial of 2067, we may return the favour. 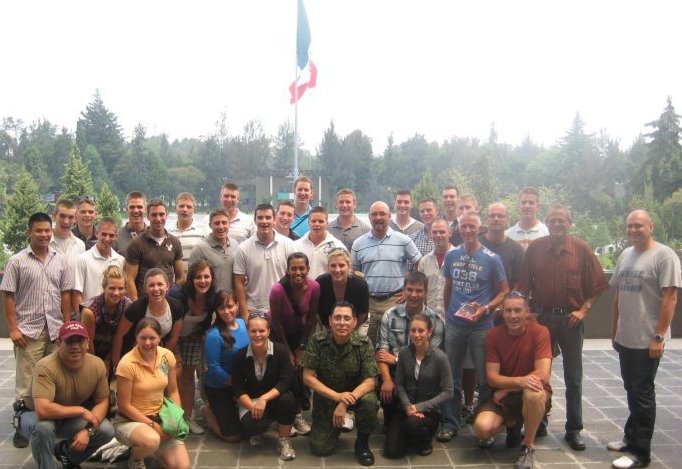 This article is the fourth and final in a series aimed at introducing the members of this semester’s Top 4. Felix Kesserwan, a 23 year old from Montreal, is this semester’s CWTO. Although he is responsible for a wide range of duties pertaining to cadet dress and deportment, training, and discipline, Felix’s college life is filled with other activities as well. He plans to graduate next spring with a degree in computer engineering, but he also holds an academic interest in human psychology.

Kesserwan is best known for his athleticism. Last year he won the Male Athlete of the Year award, and he captained the Taekwondo team to the Team of the Year Award. This past summer, he travelled to Spain to compete in the Taekwondo World University Games. His talents in this sport are complemented by his interest in playing soccer, hockey, and football, as well as other forms of martial arts. He is a strong supporter of the RMC Varsity program, and he has proudly stated that it “provides future officers with the opportunity to demonstrate their leadership in a team-building environment.” Team captains learn a lot about themselves, their leadership style, and what it means to have other individuals under their control.

Having lived in Russia for the first six years of his life, Kesserwan is fluent in the English, French, and Russian languages. He is capable of carrying on a conversation in Arabic too. Felix is looking forward to a career in the CF as a combat engineer. Having enjoyed completing his Common Army Phase in Valcartier, QC, he hopes to be posted there after finishing his training. The reality of such postings is becoming increasingly real as Kesserwan approaches the halfway point of his term as CWTO of the Cadet Wing. 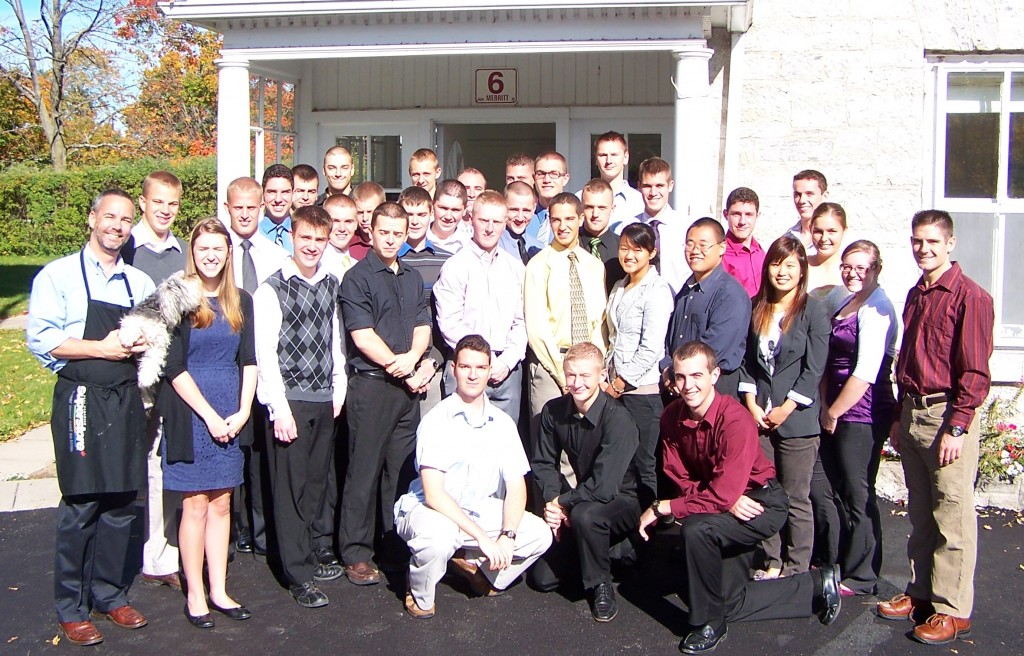 A year ago today, 6 Merritt Drive “opened” for the first cadet brunch. Since then, it has become a regular event and one that the Cadets seem to enjoy very much. Today, the “College Mom” was busy again prepping eggs for those who were unable to travel home for Thanksgiving dinner. Original numbers indicated that food would be required for about 12-15 however, when the doorbell stopped ringing the numbers were over 30!! 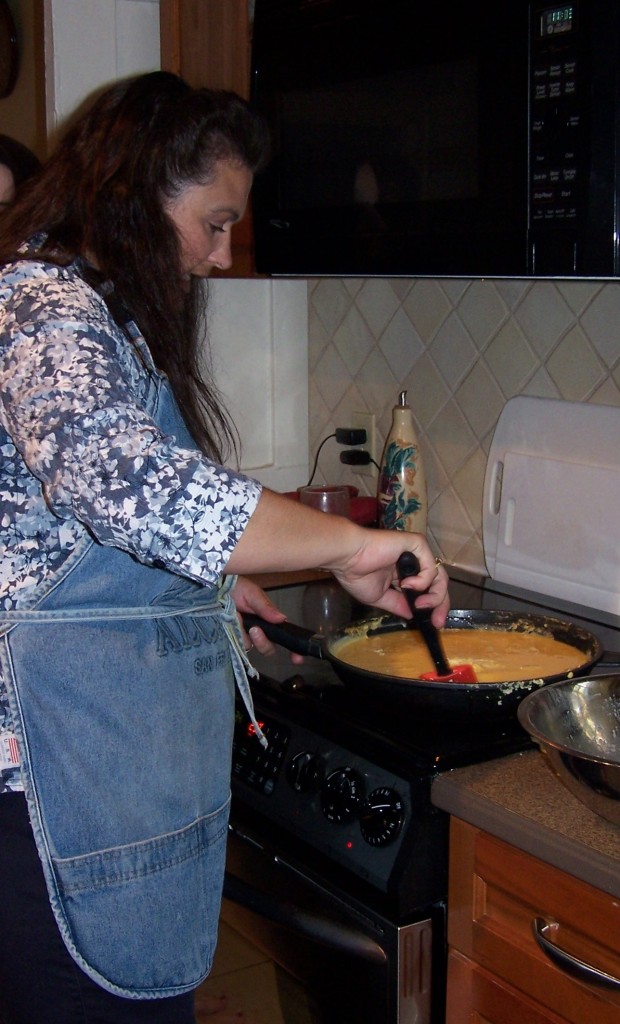 Not to be set off her game, Brenda, in great Naval wife tradition, quickly threw more eggs into the bowl and directed “More pancakes!!” As always, everyone chipped in to make it another incredible day at the residence. With full stomachs and having had the chance to roam the house, the Cadets from all years, including the CWC, OCdt Whalen and his fiancée, headed on their way all murmuring the same words – “great meal but got to go study!! “

What some of the cadets had to say…

Because I’m from Newfoundland, going home for Thanksgiving is not a feasible option. Instead, this year I was given the opportunity (along with all my fellow Officer Cadets who stayed at the College for the long weekend) of attending a Thanksgiving brunch at Commodore Truelove’s home on campus. As soon as the door was opened I was greeted by Bailey (the Truelove’s dog) and a relaxed, warm, friendly atmosphere that reminded me of home. With Tim Horton’s coffee and juice waiting in the kitchen, it didn’t take long for the cluster of Officer Cadets to start chatting away while Commodore Truelove was flipping pancakes. Commodore Truelove greeted us warmly into his home and encouraged the Officer Cadets to look around – after all, the Commandant’s House is part of the College’s history. I did not hesitate to explore the old, enchanting house and was pleasantly surprised to discover many old pictures, stories and traditions embedded within the house’s personality. With the food ready to eat, we were all set to devour the amazing spread that was offered – ham, sausage, muffins, pancakes, eggs, home fries, and various fruit plates. It felt amazing to have a home cooked meal after eating mess food since September and everyone ate their fill. After eating, the Commandant gathered with the Officer Cadets and chatted about his days at Royal Roads. All in all, the Thanksgiving brunch offered to those who stayed at the college was a chance for us to escape our rooms for a couple of hours and forget about the pressures of schoolwork and midterms – until it was over that is. The brunch provided a pleasant distraction from the realities of the academic world until it was time to get back to reality. I would encourage everyone to attend at least one brunch while at the College; it is an experience I will undoubtedly remember for a long time to come.