The staff and students of the 2017 Battlefields of Europe Tour, pictured on a ridge overlooking their final battlefield stop at the Falaise Gap region, France.

Battlegrounds of Europe: Days of Heroes and Immortals

This year, the History Department once headed up the Battlefields of Europe tour, and the selected participants, consisting of 28 students and 12  staff/faculty members, visited importance battle grounds, memorials, cemeteries, cities, and villages vital to the turning points of the First and Second World Wars, France and Belgium, from February 18-26.  No sooner did the whole group touch down at Charles de Gaulle airport than they loaded onto a bus and were off to their first destination at the battlefields of the 1916 Battle of the Somme, beginning with Beaumont Hamel, where a serious massacre of the Royal Newfoundland Regiment took place July 1, 1916.

This was our team’s first serious time superimposing what we had learned in tailored history lectures leading up to the trip onto the ground where it took place.  We began to look at the importance of space and geographical zones used for advantage in tactical assaults, and for the first time in 14 years the ravine where the German army had dug in was open for viewing.  Our group continued its journey into the past with stops at the very fields where over one hundred years ago fearsome and bloody war was waged, and now they are all grown over with trees, grass, and crops.  Scraps of metal, WWI fence posts, and sniper bunkers are now left scattered in Farmer’s fields and backyards, along coastlines, making the French and Belgium countryside latent with scars and edifices of war.  The cemeteries we visited were riddled throughout the cities and villages, on back roads, in the middle of no-where, all standing as stark testaments to the devastation of war, and leaving a profound impact on our minds.

In all, the team was swept through an invigorating and richly historically narrated journey to some key spots in a fury of motion, cultural tastes, and an overload of sights and emotions.   Everyone will agree that price of war, the impact of the dead—both allied and enemy—was where the trip really hit home.  In the cemeteries and on the memorials we would see the names of officers and soldiers our age and younger, who fought for ideals such as Truth Duty Valour and now we cannot think of that motto the same way.  At times like this we had to come to grips with the sheer futility of some campaigns, and yet responsibility and courage it took for the men and women fighting and serving to keep on amid awful conditions, even after devastating massacres and tragedies; this was always lightened, however, by the knowledge that in the big picture, liberty was afforded to those countries afflicted by or involved in the Wars.

There were two staff members (Bryan Bailey and Joel Anderson) who found relatives in cemeteries. Others in the group found family names, and even the graves of war poets, all of which brought the significance of the events and the deaths that much closer to our lives.

We met, during our travels, many of the older French and Belgium generations, who carry the tradition of respect towards Canada’s service, and have a great desire to share and preserve their stories about the Wars.  We left a bit a Canada behind by holding several flag ceremonies and replacing worn Canadian/elemental/Quebecois flags, or providing them where there were none previously, at specific memorials, and both these and simple services at various cemeteries and memorials were accompanied by readings of both French and English war literature and poetry, as well as the playing of bagpipes.

By the end of the trip, everyone could identify how it had affected them personally. Everyone experienced a fundamental shift in their mentality towards their future roles as officers in the CF, the college, and their perspectives/philosophies on life.  Our observations shaped our minds to dynamically envision and anticipate possible obstacles and tactical errors in our choices as leaders.  We learned the priceless importance of paying attention to detail while also leaving buffers in your plans for errors, and to be thorough in instructions, acquiring information, and making decisions.  We learned how land and territory features itself in major considerations of movements and supply, and to never underestimate or overestimate opponents.

The historical contexts provided made us realize the difficulty of having to make hard decisions as an officer and follow orders when you know that outcome might be undesirable or result in the loss of life, but that your role in carrying out your part of task will contribute to the great picture of mission success.  In that same line of thought, knowing when you have an ethical obligation to speak up when you have situational knowledge that might impact the orders given or limit collateral damage.  The idea of leading by example become totally new, with the realization that sometimes it takes walking across a bridge being peppered with enemy fire to convince your troops to do the same and advance to their objective.  During the trip, accompanied by many laughs, tears, good times, wonderful people, and a lot of Blackwatch and Airborne stories, there were also moments when time froze, and we just stood, sharing the air with the anger, evil, cruelty, great leaders, forgotten heroes, and valour of the past.

The brilliant organizational committee for BT17 were:

The Cadets participating in this enlightening and enriching opportunity were:

The staff, faculty, and friends of RMC also chosen to attend the trip were:

Special note of thanks.

The Battlefield Tour has become a major academic activity that the RMC Foundation funds each year through your generosity.  This trip provides the opportunity for more than 25 Officer Cadets each year to attend First and Second World War Canadian battlefields in France and Belgium during February’s Reading Week.

Your continued support of Academic Travel Activities will offer the Officer Cadets this once in a lifetime experience. Donate today to the RMC Foundation in support of the Battlefield Tour. 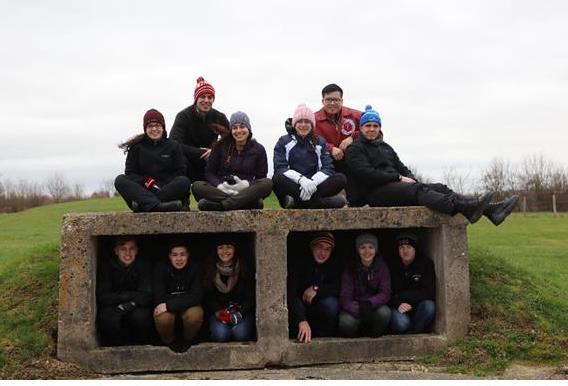 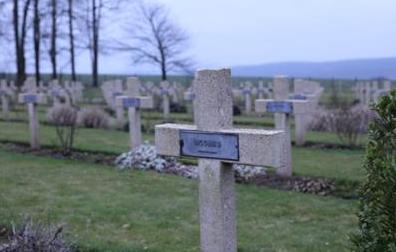 My men are strewn, cursed before

we met that land marked by war.

The fields are littered with scarecrows,

scaring the sky with their death throes.

Strategies pecked off by enemy snipers,

the hills consumed by enemy vipers.

from battlefield to farm.

We stormed the beaches and their battlements

lined the beaches with our sacrificial blood

carved into the rocks our bones.

We’ll stand together until together we lie in the ground, boys.

So take it not lightly, we who fell

from peace in the summer

to heaven’s own hell.

Mackenzie Building from the inside

Foundation helps to send scarlets off to Washington & Ottawa