“It’s about the distinction…”

19930 Dr. Nicholas Vlachopoulos (RMC 1995) will give this year’s Class of 1965 Teaching Excellence Award Public Lecture MONDAY, OCTOBER, 29, 2018, at 1900 in Currie Hall. As this is one of the most well-known and prestigious academic awards at RMC, I sat down with several of those involved behind the scenes to understand how it got its start and just what it is that makes it so special. 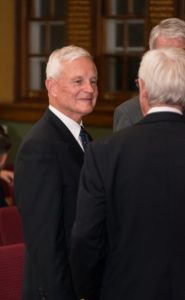 The event was the initiative of the Class of 1965 and is supported by them through the RMC Foundation. 6588 Stephen Arnold was there when it started. “It started in 1990. As a Class, we wanted to do something as a gift for the College to mark our 25th anniversary,” he explained. “There were three of us on the committee: myself, 6584 Keith Ambachtsheer, and 6590 Tom Barton. Tom and I were both professors and when Tom took several ideas to the then-Principal Dr. John Plant and came back with the suggestion that we recognize good teaching, well, it seemed very appropriate.”

As Stephen explained, the process was a little bit more involved than just coming up with the idea. “As I said, we had several ideas and we took the three best ones and mailed out letters to all of our classmates. That was a big undertaking back then!” he joked. “When we got the responses back, they had voted for what became the Teaching Excellence Award.”

Stephen stressed that while the process of choosing the recipient has changed some over the years (the Committee is currently updating the Terms of Reference once more) the standards expected of the recipients haven’t changed. “The purpose of this is to recognize excellence in teaching,” he emphasized.

The award itself is, broadly speaking, open to anyone involved in a teaching role at RMC. (It should also be noted that CMR St. Jean has its own award as well.) “The only restriction is that once an individual has won the award they are ineligible to win for the next seven years,” Stephen explained.

The process beings with the Selection Committee, which at present includes three professors from the College (today these are all past recipients of the award themselves), two to three Cadets, and a representative from the Class of 1965. 6496 Charles Emond is currently in his seventh year in that role. The Committee will put out a call for nominations early in the year, review and discuss them, and then forward the result to the Principal who announces the recipient at Convocation in May. The recipient then has to give the Public Lecture during the Fall Term.

“It’s actually quite remarkable,” Stephen, who served on the Committee during its early years, said, “when Cadets come to the Committee on behalf of those they’ve nominated. They are incredibly eager, articulate, and persuasive in their presentations.”

The award recipient also receives a check from the Class of 1965 but as Stephen stressed the dollar amount is really secondary. “We’ve been told again and again it’s not about the money. It’s about the distinction. Nevertheless, the Class of 1965 has increased the amount of the check over the years, both to keep up with inflation and to show our continued enthusiasm and support for this endeavour.”

The Public Lecture portion, as Stephen explained, has become “an occasion of its own,” but it wasn’t always that way. “There hasn’t actually always been a lecture portion. That idea came from Principal Emeritus Dr. John Cowan.” 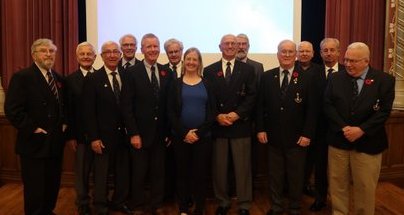 Dr. Phil Bates, RMC’s Vice Prinicipal Academic, plays a big role in the Teaching Excellence Award as well. “I am the organizer of this event along with my colleague Annalise Zinck,” he explained. “My biggest role in this activity is advertising the call for nominations and the public presentation. I also coordinate the selection process with colleagues and students.” 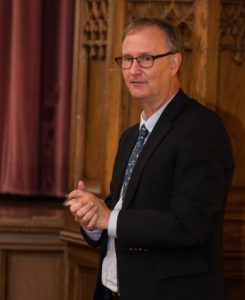 Dr. Bates echoed Stephen Arnold’s thoughts on the significance of the award itself. “Given the importance of teaching at the Royal Military College of Canada, it is not surprising that this award is a very significant event for faculty award winners. In fact, it is an honour just to be nominated. The award has been won by colleagues in all Faculties, both civilian and military, as well as indeterminate and sessional instructors.” As he went on, “RMC is very fortunate that we have alumni like those in the Class of 1965 who are able to support this and other important activities at the College through the RMC Foundation. These generous contributions mean a lot to our students, faculty, and staff.”

If you’re in the Kingston area, don’t miss out on Dr. Nicholas Vlachopoulos giving this year’s Class of 1965 Teaching Excellence Award Public Lecture MONDAY, OCTOBER 29, 2018, at 1900 in Currie Hall!