“After learning about their history, traditions, and love of hockey, it turns out we have much in common” 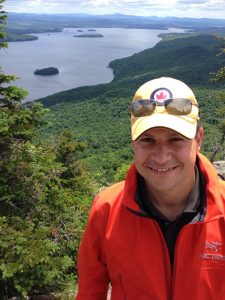 For 20661 Richard Perreault (RMC 1997), coming to military college was the best way to pursue a dream. “For as long as I can remember, I’ve always had an interest for anything that flies and for the military in general,” he said. “I figured that joining the Canadian Armed Forces, combined with attending RMC, would be the right thing to do to get a degree and start a career in the Air Force.”

Richard entered CMR in 1992 and graduated from RMC Kingston in 1997. His biggest challenge from those years, as he recalled, was staying awake during some of his classes. That being said, he has plenty of fond memories as well. “Trips to West Point stand out,” the Beauharnois, QC, native explained, “although not for any specific stories. Just to be there and see the school where so many great leaders went through was enough. There were also trips to the USNA. On one such trip we attended an Army-Navy football game while we were there. We marched in the parade from the Academy to the stadium with them and attended the game where the USNA Commandant showed up with the game’s football on a Chinook from the USMC (among other surprises).” Other favourite memories included being in the band at CMR and joining the RMC Pipes amd Drums at RMC.

Richard’s dream took an unexpected turn following graduation (but it was “all good,” he recalled). “I was initially an Air Navigator (Air Nav; now called ACSO) but I flunked celestial navigation in training and thus the course. I switched to Public Affairs in 1998.” In the latter role he has done quite well for himself: “I am still in the CAF, at the rank of Colonel. I am currently the Chief of Staff ADM(PA) and the Public Affairs Branch Advisor.”

Looking back over such a long career, it’s the travel that really stands out for him. “I’ve travelled in many places around the world, both in war zones and not. Switzerland and Germany stand out for the magnificence of the mountains, the people, and the unique experience of working/learning with their armed forces. Afghanistan and Haiti, despite the risk, were noteworthy for being able to witness the resilience of the people living there. And more recently there was Latvia,” he explained. “I did not know much about this part of the world until a few years ago and after having learned about their history, traditions, and love of hockey, I found out we have much in common.”

Like many ex-Cadets, Richard has stayed in touch with those he met at military college (and that includes classmates and staff). “I had the good fortune of meeting a lot of good people with whom I stayed in touch after grad. The professors and mil staff, for the most part, were great. Some of the mil staff during my time at RMC also became colleagues of mine later in my career.”