Command has a specific meaning in the military. Command speaks to the authority has been conferred onto the individual to exercise decision making down the chain of command. Think of it as being in charge, and therefore, it carries with it both responsibility and accountability for the decisions that are made. While I speak of this topic from the vantage point of the military, it does translate to the civilian workplace as well. The job titles might be different, the type of decisions being made can be very different, and the consequences of those decision can most certainly be different. But nevertheless, there are consequences of decision for those in charge whether we call them a commander, or a CEO. To command is indeed a privilege. It is an honour. And that is often what we hear about when it is spoken of in public, most especially by those who bear the title of commander. But, there is also a burden with command. It is rarely spoken about in public because it carries a negative connotation. It should not. That burden is the weight that reminds you of your responsibility. It reminds you of the human consequences. It reminds you that you are also human. I have witnessed it, and I have experienced it. I would like to talk about it.

It is lonely at the top. In hierarchical structures, one’s peer group gets whittled down the higher up you are, and the peers you have to commiserate with over common challenges and frustrations is diminished or non-existent. The scope of the problem also changes as you advance. The second and third order effects of a decision can be be more pronounced, and there are often more outside factors that need to be considered. It does not get easier the higher you go. While you may have more staff working for you to facilitate your decision making, your informal network and support system is not as great. The value of peer support should not be taken for granted. I was fortunate enough to witness this first hand before I ever had to experience it.

I learned a great deal about the weight of responsibility as an Executive Assistant to a General Officer. I had the obvious duties of coordinating and preparing him for his meetings with his subordinates, general staff, or outside civilian and government partners. I was the “gatekeeper” to his office to some degree for both written documentation and for office calls. I knew I would be privy to sensitive things and I would have to demonstrate total discretion. I expected that going into the job. But I only fully appreciated, once I was seated in the position, that I as a member of the inner sanctum I was one of the most trusted people within his circle. I was privy to the personal deliberations that came with the most challenging decisions. I had the opportunity to see the human side of command at higher levels.

I am certain that this general would never have said that command was a burden, or look upon his responsibility in any negative light. But I saw him deliberate long and hard over certain things. I listened, and was an informal sounding board in some exceptional circumstances, on matters that were emotive and he absolutely did not want to miss the mark. I witnessed things factoring into his decision making that would be completely transparent to those under his command. And when back in my own circle of peers, I would hear their interpretation of why a certain decision was made. It did not always align with reality. Perspective is powerful. My time as an Executive Assistant broadened my perspective. It showed me that it was easy to be principled and passionate over a topic, and to take a hard stance on a certain matter, when you were not the actual person who was to be held accountable for that decision.

While I certainly felt the responsibility of command as a Battery Commander, responsible for a sub unit of 160 personnel, it was nothing in comparison to what I felt on May 21st, 2014. I will never forget that day. It was the day that my Commanding Officer, Lieutenant-Colonel Dan Bobbitt was killed in vehicle accident during a training exercise. I was the Regimental Second-in-Command, and in an instant, my professional life was greatly altered. I had been in that position for almost two years by that point. I distinctly recall the words that I said to the previous Commanding Officer when I told him I was interested in the position. I said, “I’ll tell you what you need to hear, and not what you want to hear.” As I mentioned above though, it is a lot easier to say the words, when you are not personally responsible for the decision. Suddenly, now as the Acting Commanding Officer, I was personally responsible, and I didn’t have a second-in-command. I also didn’t have the benefit of a peer group of other commanding officers within the brigade. That isn’t to say that the other commanding officer’s were not supportive, but just that they were not my peer group exactly. I suddenly had a great responsibility towards Dan’s family and towards all 550 members of the Regiment by way of a tragic circumstances. On paper I had been appointed as Acting Commanding Officer when Dan had deployed on exercise so that I had legal authority for routine decision making for the Regimental Rear Party. I went to work that morning feeling as responsible as I suspect most leaders feel on an average day. I didn’t make decisions or provide advice flippantly, or without due consideration, but the weight of responsibility was not something I was cognizant of, or something that was omnipresent. I did not leave work that day feeling the same way. Though my title remained as Acting Commanding Officer, I can assure you, I no longer felt like I was “acting,” not in any capacity. I noticed the weight in an instant. I was reminded once again of the burden of command.

I looked for an appropriate photo to accompany this article, and it was challenging. My search mostly produced pictures depicting a hunched over figure seen to be struggling under a weight. That is not what I wanted to convey. I wanted to convey strength, an image of someone capably carrying the burden. Why a burden specifically? Why the focus on that word? Because it specifically denotes a heavy load. If you are in charge, you bear responsibility. And depending on your field, what level you are at, that responsibility can be very great. It is heavy. Therefore burden is the appropriate word, but it does not mean we are unable to bear it. And if you cannot acknowledge the responsibility you carry, or you think it is always easy to bear, I think it might be time for some honest self reflection. Acknowledging the burden of command, the weight of responsibility, means you are human, and means that you care about those you lead. If you do not care about those you lead, then perhaps you are in the wrong line of business. With that said, I offer this quote to close: 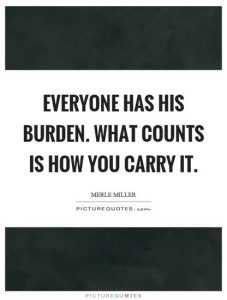 18866 Eva Martinez Talks RMC and Her Love Affair with Aviation

25492 Jeff Caselton Living the Dream as an Infantry Officer