“I wanted to give back to RMC, an institution that I am very proud to have attended” 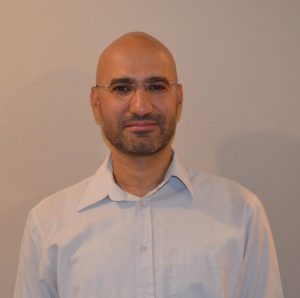 21833 Dr. Ribal Georges Sabat (RMC 2000), Associate Professor in RMC’s Department of Physics and Space Science, has called the College home for some time now. He currently teaches Second Year Mechanics for students in science and engineering, as well as electromagnetism and optics for senior physics and space science students, but he has been at the College as a Cadet and as a grad student as well.

“I have been involved with RMC from 1996 to 2000 and then again from 2003 until now,” he explained. “I emigrated from Lebanon to Montreal at the age of twelve. I joined the Canadian Forces at the age of eighteen and I graduated from RMC in 2000 with a degree in Honours Physics. After graduation from RMC, I was posted to Cold Lake, AB as my trade was AERE – Aerospace Engineer.” After his time in Cold Lake, from 2003 to 2005, he came back to RMC as a sponsored military graduate student and completed his Master’s degree in experimental physics. “From 2005 to 2010, I was a military faculty in the department of physics at RMC and I also pursued a PhD in Physics on a part-time basis and finished it in 2009. In 2010, I competed for a civilian faculty position in the department of physics at RMC and I was successfully selected. So, I left the military to pursue my passion for teaching and research. I am now also an adjunct associate professor of physics at Queen’s university.”

Having such a background allows Dr. Sabat to bring a unique perspective to the classroom. “Ever since I was a cadet here, I developed a passion for physics and I knew that I wanted to become a teacher. I was grateful to the military for allowing me to be posted to RMC as a lecturer. This has deepened my desire for becoming a teacher and a researcher, and I wanted to give back to RMC, an institution that I am very proud to have attended,” he explained. “Having gone through RMC as a cadet myself, I was able to connect at a deeper level with my students. Even though physics can be an abstract subject at times, I strive to provide concrete examples when teaching so that my students can relate their own experiences, whether in the military or their personal lives, to the subjects being taught.”

“Over the years,” he said, “I have forged a number of professional collaborations with research groups at other national and international universities. I have also been invited to present seminars at several other Canadian universities.” Dr. Sabat is therefore quite knowledgeable on student experiences at other universities. “To me,” he explained, “what distinguishes RMC from other Canadian universities is the sense of a small community that we have at RMC where members take care of each other in time of need. Also, the two other biggest advantages that students at RMC have compared to other Universities are the small student to faculty ratio, enabling our students to get a personalized academic experience, as well as the well-rounded education that cadets obtain at RMC not only from academia, but from participating in sports, learning a second language and taking part in leadership and military training.”

Being a teacher, and especially one in an institution such as RMC, is not something that Dr. Sabat takes lightly. “To me, being a teacher means that I have been trusted by society to instill and pass on the humanity’s knowledge to the next generation. I take this task very seriously and I strive to teach my students, not only about science, but about life. To me, a teacher must be understanding and compassionate, meaning that I must be able to adapt my teaching strategies to suit my students’ needs,” he explained. “In my opinion, the most important quality that a teacher can possess is their ability to explain a complex notion at the right level of knowledge to the audience. My hope is that if I try to be the best teacher than I can be, I can perhaps influence my students to give their best in studying for my course and passing my exams. A quality of a good teacher is their ability to pass on their passion and lovingness about their subject matter expertise to their students. I find it remarkably satisfying to talk about physics and optics and I love seeing the look of amazement on my students’ faces when I show them a hands-on physics or optics live demonstration, which can sometimes be completely counter-intuitive to them.”

Dr. Sabat’s research expertise, in optics and photonics as well as optical materials, carries on that focus on hands-on, real-world applications. As he explained, “My research team and I conduct research on measuring, understanding and enhancing the physical properties of materials at the nanoscale and we use these materials in functional devices and applications such as light-based biosensors for the detection of proteins and bacteria in water-based solutions, as well as other applications such as thin-film solar cells, light emitting diodes, light waveguides, optical communications and imaging.”

“In the last year,” he explained, “I worked on a research project in which my research team and I developed a nanoscale light-based sensor for detecting low concentrations of E. Coli bacteria for diagnosing Urinary Tract Infections. The uniqueness of our discovery is that our sensor provides real-time accurate analysis in only a few minutes using inexpensive components. In the future, our biomedical device will ultimately alleviate some strain on healthcare systems everywhere, particularly in developing countries.”