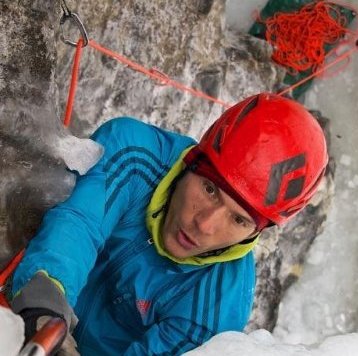 LAKE LOUISE – A female skier is lucky to be alive after being buried for up to 15 minutes in 3.5-metres of avalanche debris near Moraine Lake at the beginning of April.

A group of three skiers were ascending a slope on the south east side of Sentinel Pass above Moraine Lake on April 5 when 23414 Tim Banfield, the lead skier, triggered a size 2.5 avalanche.

Moments earlier the group had just finished doing their last switch back and were about 100 feet apart on the final traverse near the col when the avalanche occurred. Within seconds the entire slope began to slide immediately swallowing up the third skier (who asked to remain anonymous) dragging her 200 metres down the face of the mountain. Maia Schumacher, the second skier in the group, was also caught up in the slide and was partially buried up to her thighs. Both skiers were left uninjured.

“I had my headphones in and then all of a sudden I looked down at my feet and thought ‘oh that’s really weird there’s this shooting crack maybe we should reconsider being here,’ ” said Banfield, four days after the terrifying event.

By the time that thought crossed his mind the snow below his feet was already on the move, sweeping the entire group down the face of the mountain.

Almost immediately, Banfield lost sight of his friend at the back of the group before he too got caught up in the avalanche.

“I was on my right side trying to dig in my edges,” said Banfield, adding the crown was about 20 feet above him when the avalanche occurred.

By the time the slide came to a stand still below him, the 41-year-old had successfully stopped himself leaving him clinging to the icy slope, with his skins on and his skis in uphill mode.

Concerned for his friends, he immediately tried to put his bindings into downhill mode, but his attempts were futile given the precarious position he was in.

With few other options he decided to try and sideslip his way down, but lost his footing and slid head first down the slope completely out of control.

Despite his unorthodox approach, he somehow managed to slide safely to a stop only a few feet from Schumacher, who was buried up to her thighs.

After checking that she was OK and could extract herself, Banfield kicked off his skis, turned his beacon to search mode and headed to the most logical point where their other partner could be buried.

“My beacon hit 32 metres, then 25 metres, then 18 metres and then partner two yelled out that she had nine metres, so I went in that direction,” wrote Banfield, who shared his first-hand account of the avalanche in Gripped.

As the pair narrowed their search to a four-metre area, he quickly realized that she was buried four metres below them – a depth very few people ever survive.

“The survival rate at two metres is four per cent and we were looking at four metres,” said Banfield, who thought she was dead.

Making things worse, their probes were not long enough making it impossible to know if they were in the right spot before digging.

Taking a chance, they decided to dig down anyway, removing 50 to 100 cm of snow before starting to probe again. This time they had a strike at the full depth of the probe, which was another 320 cm below them.

“I actually thought it was the ground because it was so deep, but it was the only shot we had so we continued to dig,” said Banfield.

After digging for about 15 minutes, Banfield suddenly saw a piece of orange material from her backpack indicating they had found her, however there was still no sign whether she was alive or not.

After a few more minutes of digging he located a black buckle and was able to ascertain that the buckle was located at the top of her pack not far from her head.

Buoyed by the possibility that she may still be alive, he kept digging and managed to create a small hole around her face so she could breath.

“For the first couple of minutes she made really ghastly noises,” recalled Banfield.

After getting her nose free the pair quickly removed the snow around her mouth.

“Even going from clearing her nose to clearing her mouth, even just a couple of centimetres lower, was really challenging in the position I was in,” said Banfield, explaining he was digging in a handstand like position in a hole that was only shoulder width wide.

With her airways cleared their next concern was keeping her warm using their coats to cover her head and the back of her neck.

From there Banfield was able to clear the snow around her shoulders and was able to free one of her arms before digging out her pack, where her inReach was located so they could call for help.

“I dug out her pack and began reefing on the handle thinking that if she had any injury whatsoever I was going to really do a bad thing here, but I was like she’s going to die if I don’t do it.”

Eventually he was able to free her pack creating more room for her to breath and allowing them to slip an unzipped coat around her.

“At this point we thought she might live, there was a real possibility.”

After more than an hour into the ordeal the pair managed to remove the snow around her hips and legs, however her feet were still firmly attached to her skis, which were anchored in the snow.

“I was almost in a handstand position at 60 degrees stabbing at the front pin of her binding trying to get that foot released and then all of a sudden, 10 swings into it, ‘pop’ it came out, her leg was free,” said Banfield, with a sigh of relief.

With one leg free it looked like they would finally be able to free their friend, but getting her other leg free, which was buried beneath her, was nearly impossible.

To get her second leg free the pair could only use the head of the shovel and had to gingerly remove snow one shovel load at a time.

With the snow removed, Banfield went back down the hole head first to try and pop her binding off using a ski pole. On his fifth stab it worked and she was free.

With her free from the avalanche debris, the pair turned their attention to keeping her warm and sent a second message using her inReach to confirm that someone was coming to rescue them.

“We cut a ledge in the hole, put our packs down and then put her seat on those packs and then it became a job of taking turns spooning,” said Banfield. “At this time I was mega cold because I didn’t have a coat and in all honestly I feel like I was getting more warmth from her then she was from me.”

About 45 minutes later a helicopter arrived with a Parks Canada’s visitor safety team on board which took the group to Lake Louise.

“It was a big, deep hole and a very close call,” said Steve Holeczi, a visitor safety specialist with Parks Canada, who was first on scene.

“A burial of that depth for those guys to get her out in the time they did is an amazing job.”

According to Parks Canada, the avalanche was 200-metres wide and 20-40 cm deep.

“It wasn’t a very deep avalanche, but the way the terrain goes it’s a wide slope and at the bottom it just goes into this terrain trap, so that’s why all the snow buried her that deep,” said Holeczi.

Reflecting on the experience Banfield said it won’t stop him from venturing into the backcountry, but he does plan to buy a longer probe and a larger shovel the next time he goes out.