23843 Erin McEachern Ryan, graduated from Kelowna Secondary School, Kelowna, BC.  She arrived at RMC in September 2003 – as a proud member of 7 Squadron – graduated in 2007.

Over the past 11 years, Erin, has had a very interesting career. We are appreciative that she has agreed to share some of her experiences. 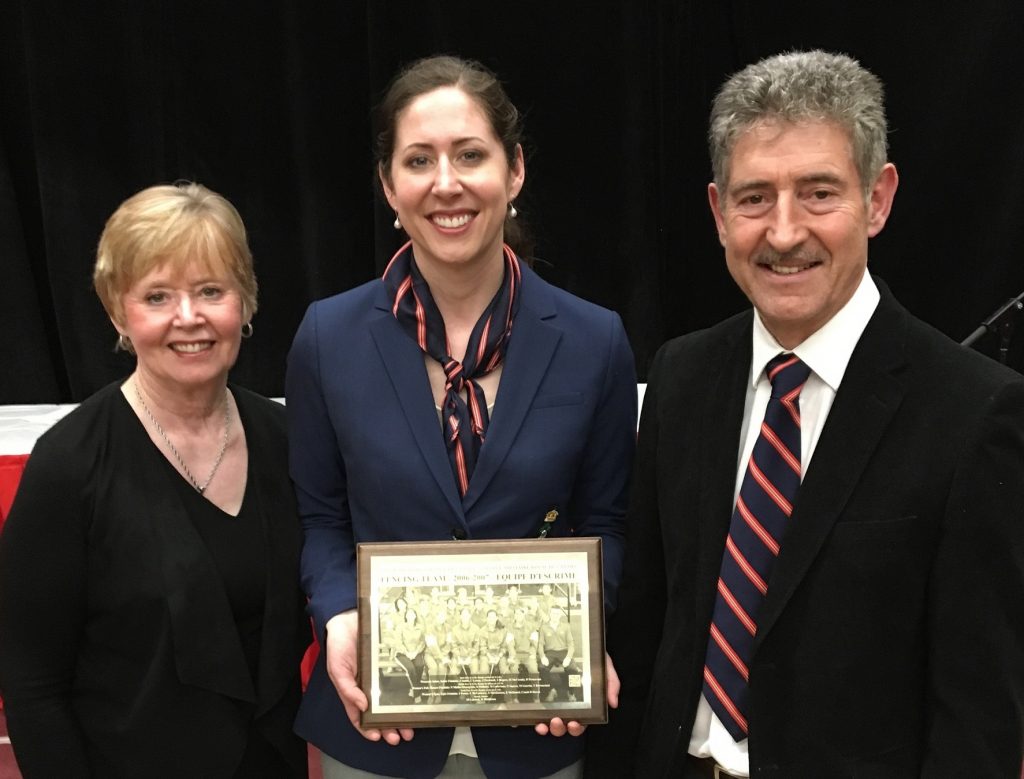 My dad, 11117 Don McEachern went to Royal Roads and RMC class of ‘76 and I saw that his classmates were truly lifelong friends. I wanted to go to RMC and make those lifelong friends. Fortunately, I got exactly what I signed up for.

Recently a whole group of us met up for our 10-year reunion in Kingston which was a wonderful visit (thanks Dean for putting us all up!). We have also been having great visits celebrating each others’ weddings.

Early memories from the RMC days?

First year was so difficult – I thought the worst was over after I finished basic training and was on the bus towards RMC from St Jean. I saw all these white bedsheets on the rock walls lining the road towards RMC spray painted with messages of warning. I had no clue at the time that FYOP was laying in wait for me. During FYOP I decided to try out for the varsity fencing team which was the best decision I could have made. Patti Howes, the coach, is absolutely amazing, and she taught me how to fence. The fencing team became my family, which is really what got me through college.

Later in first year, I remember doing calculus with others on the white boards in the hallways in our dorm in Fort Sauve. My friend Mike Connolly was writing on the whiteboard with a marker when he turned and jokingly went into a fencing stance and said ‘On guard!!’ His eyes quickly turned to fear when I immediately parried his whiteboard marker with my own and stabbed him right in the chest! I wish I could say that it didn’t draw blood but, well, it did. Poor Mike. Patti had taught me well!

I graduated in 2007 from RMC with a BEng in Chemical Engineering. I just had my 10 year reunion which was well worth the trip to Kingston – I would highly encourage others to go back for their reunions.

Dr Ron Weir gave me my engineering ring, which was really neat because he had been one of my dad’s profs in chemical engineering back in the 70’s when Dr Weir was a young Major. Dr Wojtyk was my organic chem prof and also my thesis advisor which was very good of him, especially since I didn’t do too well in organic chem.

Although I played sports in high school I found it challenging to be so physically active while being sleep deprived. Actually, everything gets so much harder when you are sleep deprived. Staying awake in class certainly gets harder.

I started RMC as a Naval Combat Systems Engineer and during the summers of RMC I did a couple of things in the navy including NETPO and phase 4 engineering.

I also had an OJT summer where I served as crew onboard the tallship the HMCS Oriole on the west coast. The HMCS Oriole was ingredible, as I got to race in the Van Isle 360 and then sailed to Portland, Oregan to participate in a tallship show (and even shot our cannon at other tallships in a mock battle!).

In fourth year RMC I applied to medical school. I was accepted to the University of Toronto and luckily, the military was very supportive and allowed me to go to medical school right out of RMC.

I changed classifications to GDMO (medical officer, or MO). I did family medicine residency in my hometown of Kelowna through the UBC Rural program, and I have been posted to Edmonton ever since.

I am now OC Med Coy in Edmonton. Working at an operational unit has been incredible. I am helping out with a TACMED course in Suffield right now and in a couple of weeks I am going to the UK to do a CBRN course for MOs.

Changing to medicine was very difficult for me. I really felt that the caliber of people in medical school were just outstanding – there were some very brilliant minds.

It was hard to change from “open book” tests in my engineering undergrad, to the memorization that is required in medicine. But I think I got the hang of it after changing my study habits. Now I am so glad to have the privilege of being a family doctor. I really love my work and I find it very rewarding.

I am so proud of my time as an RMC fencer. During my time at RMC, I won a bronze medal at the US Military Open fencing championships, a silver medal in OUA individual women’s epee, and a gold medal at the OUAs in team women’s epee.

We also won the OUA banner the three times in a row, and both the women’s and men’s 2006-2007 fencing teams were recently inducted into the RMC Athletic Wall of Distinction (AWOD). I was invited to the AWOD induction ceremony just a month ago as the 2006-2007 women’s team captain, which was a great honour.

Patti Howes, without a doubt. She taught me to fence, increased my RMC PT test score (by 100 points), led us to victory, gave me advice on interacting with my chain of command, and even wrote a reference letter for me to go to medical school.

I also had two great mentors on my fencing team, Sarah McRae and Jeni Kuehnle (nee Hoover). They taught me the trick to RMC – really all I had to do was to have a clean room and a good uniform. It was so helpful to work with such amazing women. Sarah is now in medical school herself at McGill.

What are your priorities these days?

Honestly, my number one priority is to be a good mom. I feel so lucky to have two wonderful kids with my husband Connor. At work, I am enjoying learning new things in environmental medicine. I am a Flight Surgeon and as I previously mentioned, I will be attending a “Clinical Management of CBRN Casualties” course in the UK next month. I hope I can also become a Dive Surgeon. It gives me such a diversity of patients who enrich my practise.