Scott Blakie has been the Class Secretary for the Class of 2008 for the past ten years. He hails from Airdrie, Alberta. The City of Airdrie is part of the Calgary census metropolitan area and a member community of the Calgary Regional Partnership.

The BEng (Field Of Study Mechanical Engineering) graduate was a product from Father Lacombe High School prior to signing on the dotted line to attend the Royal Military College of Canada.

In his own words: 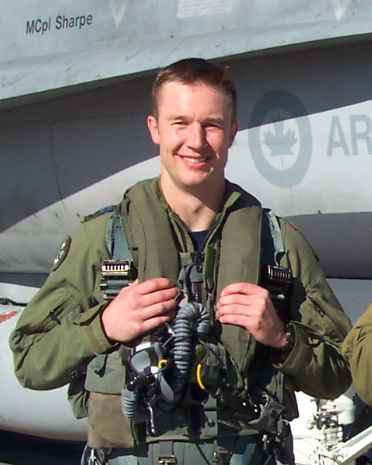 Motivation towards applying to RMC:

“I was (and currently am) a firm believer in the value of a balanced life combining physical, intellectual and mental challenges. As far as I could tell, attending Military College was the best avenue to challenge each of these faculties – and I was right. RMC does a tremendous job of developing well-rounded individuals. It’s an experience that I would not have had at a civilian university and one that has benefited me tremendously throughout my career.

When was your entry year?

I entered RMC in 2004. I was assigned to Whiskey Flight in 8 Squadron as a first year.  Our recruit staff was CFL Roy Ulrich, D/CFL Rebecca Evans, CSCs John Bossence, Pierre Gauthier, and Steve Latwaitis.

As any first year cadet, I was heavily influenced by my recruit staff and I was fortunate to have such outstanding mentors.  They really had a positive impact on myself, and I credit much of the success I had at RMC and throughout my career to their early coaching.

Our flight became very close and we would ultimately win the obstacle course in 2004 and I believe that was the result of their leadership.  The early affirmation that good leadership results in team success was a good lesson at the front end of my RMC experience.

We were fortunate to have a number of outstanding professors while at Military College who really understood life as a cadet and were able to leverage the best performance out of our often tired minds.  Professors like Dr. Weir, Dr. Wehlau, Dr. Johnson, Dr. Moffatt, Dr. Bardon, and Dr. Billy Allan were true experts not only in their fields but also in teaching.

It was a pleasure to cross paths with each of them.

I was also fortunate to fall under the wing of LCol (ret’d) Tony O’Keeffe.  He was and remains to this day, one of the finest leaders I have ever met and without doubt the most inspirational.  I took up more of his time in fourth year than I had the right to and learned a tremendous amount from him.  I believe that his extensive operational background combined with his lifetime of experience competing at a world class level has given him a unique perspective, and clarity of view.  I benefited from this tremendously and he remains a mentor and friend to this day.

What do you consider your biggest challenge(s) while attending milcol?

The biggest challenge at military college lies in balancing the many competing demands of your time.  Fortunately, this is also where the biggest benefits of the Milcol program are derived.  I’ve always believed that there was sufficient workload in each of the four pillars to occupy all of a cadets time.  The challenge for a cadet is to prioritize tasks and manage their time in a way that maximizes the experience they are looking for at a college.  Getting that balance correct, and excelling as much as possible in everything you choose to do is a constant challenge.

I have served 10 years since graduating from RMC and am currently working as a Flight Test Engineer at the Aerospace Engineering Test Establishment in Cold Lake AB.

During that period I served with 407 Long Range Patrol Squadron in Comox, deployed to Sicily for 6 months in support of OPERATION MOBILE, served as a Squadron Commander at the Royal Military College in Saint Jean sur Richelieu, and attended Test Pilot School at the National Test Pilot School in Mojave California.

The year at Test Pilot School was a career highlight.  They run an outstanding program with the opportunity to do some really interesting work in some very unique airplanes.

What have you been doing recently?

I am still serving as a Flight Test Engineer at the Aerospace Engineering Test Establishment in Cold Lake, AB.  Since starting training as an FTE in 2016, I’ve flown over 200 hours in 30 types of aircraft.

What is your role with your Class?

I have been the Class Secretary since I graduated in 2008.  I am not sure how I was selected for the position but believe it may have had something to do with my position as CWC during the second semester.

During that period, I was heavily involved in RMC activities and specifically those involving the class of 2008.  Those responsibilities seem to spill into the post-graduation period and ultimately to the present.

My four years at RMC were some of the most formative and productive years of my life.  It opened opportunities that would not have otherwise been available and allowed me to meet people that I would not have had the opportunity to meet.

All of these experiences have positioned me well to be an effective member of the CAF.  The RMC program has tremendous value and I will always be grateful for and look back fondly on my time as a cadet.”